With Britain’s rivers at record high levels, the potential for flooding – and the devastation that floods bring with them – has never been greater. A new product developed by a division of Hydro-Logic Ltd is an improved early warning system made with the help of Protolabs.

Rapid injection moulding specialist Protolabs is supplying tooling and parts for a revolutionary new telemetry logging-device that generates alarms in the event of heavy rainfall, river or urban flooding or water distribution bursts. The product is due for release in the summer and brisk sales are anticipated.

FROG is a new GPRS telemetry logger from Isodaq Technology, a division of Herefordshire-based Hydro-Logic Ltd. Unlike many of its competitors, FROG is ideal for remote installations where conventional power and telephone systems are expensive to install. FROG is the newest of the Isodaq range to fully implement GPRS communications in a batterypowered device. GPRS is fast connection technology, which provides cost-effective remote telemetry to subscribers. FROG takes water-level measurements typically every 15 minutes and stores the information until the data log is transmitted to a central server once a day.

The design of FROG’s housing allows a water level ‘dipper’ to pass the electronics without enlarging the physical size of the product. As the device’s body is a green aluminium extrusion (that resembles the shape of a frog) it didn’t take long for its creator to come up with a name.

The company initially looked at commonly available forms of rapid prototyping such as FDM and SLA but decided that there would be no substitute for testing with real injection moulded parts. However, the anticipated volumes for FROG could not justify the cost of expensive steel production tooling demanded by conventional injection moulding techniques.

“Protolabs has been so efficient that the end caps are actually the first completed parts we have received for FROG.” 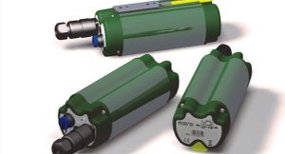 We searched online and considered many different options before we came across details of Protolabs' rapid plastic injection moulding process,” says the company’s products director for the Isodaq range, Tim Campbell. “The website says from 3D CAD to real plastic parts in production intent material as fast as the next day, which caught our attention.”

Another advantage which impressed Hydro-Logic was that Protomold uses advanced aluminium alloys to produce multi-cavity moulds that can be guaranteed for the life of the project if required, thus supporting ongoing production as well as prototyping.

“We were all very impressed with ProtoQuote,” says Mr Campbell. “Within a few hours we had a comprehensive, interactive online quotation coupled with feedback on design and mouldability. While viewing the quote, it was possible to adjust parameters such as resin, finish and part quantity through the ProtoQuote 3D viewer, and the price adapted in real time to reflect the new input. Ultimately, the prices we received for both the tooling and the parts were much less than we expected.”

The project was given the ‘green light’ and Protolabs produced the rapid injection mould tooling and 400 end caps, ready to be fitted to the first 200 Isodaq FROG units. 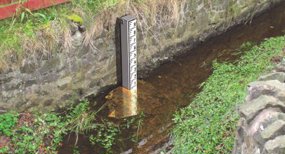 “To be honest, Protolabs has been so efficient that the end caps are actually the first completed parts we have received for FROG,” says Mr Campbell.

“We are all impressed with the end result – even the colour. Some people were sceptical that Protomold could match the green RAL colour that we specified, but they were wrong! The match is perfect. It’s now down to our extrusion supplier to do an equally good job.”

Hydro-Logic has already fitted several of the end caps supplied by Protolabs to its ‘dummy’ extrusion and according to Mr Campbell they fit the part, perfectly. However, if any changes are required to future end cap quantities as a result of modifications to mating parts, the Protolabs process is flexible enough to react easily to last-minute design changes or revisions, thus reducing timeto- market and keeping costs within budget.

“Although we’ve never met face -to-face, the process could not have been any simpler,” says Mr Campbell. “The fact that Protolabs has delivered these parts quickly and at an affordable price ensures we keep our costs as low as possible, which is one of our top priorities for FROG.”