When a keen cyclist’s new car didn’t have the right mount system for his bikes, he used his skills as an automotive designer to develop a new product that met his needs – and asked digital manufacturer of prototypes and production parts, Protolabs, to help. 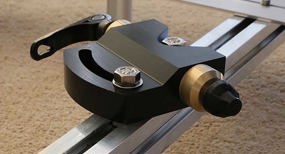 Lester Allen runs a UK-based consultancy specialising in conceptual design for automotive manufacturers worldwide. In his spare time, he likes to go cycling with his wife. While his work involves driving impressive sports cars, his personal life requires a practical vehicle capable of transporting two bikes.

When choosing his latest car, he’d been impressed by the maker’s proprietary mounting system, which fits on the floor of certain vehicles in its range. The sales material indicated how the support rack could easily accommodate two bikes but, unfortunately, when Lester bought the car and tested the bike rack, he found there was space for only one.

The issue was due to the block design, which limited the mount’s range of movement, both vertically and in rotation. As well as restricting the capability to only one bike, the design offered no scope for the adjustment needed to accommodate different frame and wheel sizes.

Lester’s solution to the problem was relatively simple, but he had to carry out a lot of research to be certain his block design would provide the full adjustability he needed. Once he’d developed the design in CAD, he approached Protolabs to assist with the manufacture of his design.

After submitting his CAD model, an interactive automated quote was generated. During the quoting process, Protolabs identified some potential improvements to help streamline production.

These were discussed with Lester, who agreed that aspects of the design could be simplified to reduce machining costs without affecting functionality. As the suggested changes were largely aesthetic, the resulting bike mount retained the appearance Lester was hoping for.

"The online service was excellent, providing clear and understandable information, which guided my choice of material and finish for the piece." 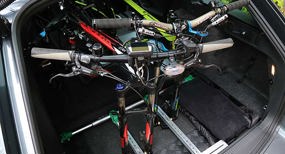 A speedy conclusion – and future possibilities

Another important factor in the success of this project was the speed of the later stages of the development process. Lester was keen to test-drive the concept as quickly as possible, and he believes the swift completion was due largely to the service he received from Protolabs.

Lester commented, “The online service was excellent, providing clear and understandable information, which guided my choice of material and finish for the piece. The customer services team were brilliant at all times, responding very effectively to our requests. The part was produced and sent through without delay.”

Now Lester and his wife can load up both their bikes whenever they want. And the new mount system might even go into full production one day – Lester is confident other cyclists could benefit from the design, and is considering approaching car manufacturers with the idea.