Law enforcement agencies like the RCMP, other civic first-responders, and the military, are prime examples of markets that Bethesda, Maryland-based Lockheed Martin is finding for its commercial-grade Indago Quadcopter unmanned aerial vehicle (UAV) or drone. Beyond law enforcement and military customers, others finding uses for this new drone include firefighters, real estate firms, farmers and construction companies. The Indago, developed by Lockheed’s Procerus subsidiary, with prototyping and low-volume production help from Protolabs, is a small, 5-pound, fold-up quadcopter.

The aircraft is capable of work at various ranges—up to 1.5 miles (2.5 kilometers) using integrated antenna solutions—from its ground controller and, according to Lockheed, at altitudes of up to 500 feet above ground level (AGL) and 18,000 feet mean sea level (MSL). The drone is capable of multiple, interchangeable payloads, Lockheed Martin says, and has an average flying time of 45+ minutes with payload.

Talking through a problem with a colleague can sometimes makes things happen. For Miguel Perez, a crucial step in the whole development of what would become the Indago drone goes back to a conversation he had with Sam Russell about Protolabs. Perez and Russell are both engineers for Procerus. Russell “had found Protolabs online, had used the company for a different project, and found that Protolabs could turn things around quickly,” Perez recalls. In product development, Perez says, “we often need parts fast, like yesterday, so rapid manufacturing is important because it accelerates the design process.”

“Within a day, you get an answer as to whether you can make the part, whether you need to make changes.”

An additional speed component Perez cites was the feedback he discovered he could get from Protolabs’ automated quoting system, which includes a design-for-manufacturability (DFM) component. He said this system was key. “The auto-quoting system is amazing. Within a day, you get an answer as to whether you can make the part, whether you need to make changes, etc. And you can do that quickly, upload a new version, and get a part in a couple of days as opposed to a week just for a quote from other manufacturers.” 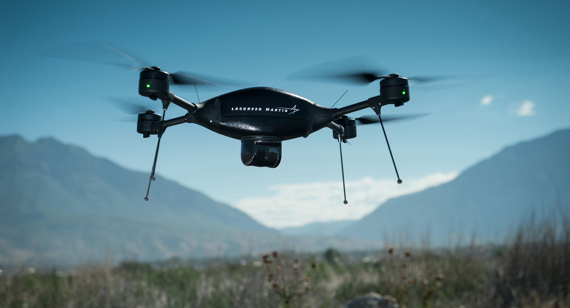 The Indago is a small, 5-pound, foldable quadcopter.

Before Perez received any actual quick-turn parts from Protolabs, he found the company’s DFM analysis served as a valuable tutor, guiding him through various part iterations, and eventually leading him to shift from what was originally a 3D printing project to prototyping with injection moulding.

“The quoting system was awesome,” Perez says. “It immediately told me if something was at all mouldable in the first place, plus it gave me a rough idea on mould cost and part cost, and every time within a day … It basically taught me how to design injection-moulded parts. I was not that familiar with designing injection-moulded parts before that.”

The initial design challenge Perez says he faced was changing 3D-printing designs “to be mouldable.” He recalls that he would submit an unmodified model to Protolabs’ auto-quoting system and then get feedback, for example, on how the mould halves might work, suggested side pulls and highlights of the features that could not be moulded.

“I would then use this information to make the part into multiple mouldable interfacing parts that would preserve the design intent,” Perez says. Then he’d resubmit the modified parts and get more feedback from the quoting system for how the mould might be made, showing him, for instance, where he may have overlooked undercuts and required draft in appropriate directions and where fillets and unformed features might occur because of the machinability of the mould.

“This was an iterative design approach that was accelerated because of the quick turnaround of the quoting system,” Perez says. “By using this process, I was able to better learn what was expected and what was possible for mouldability. I was then able to think through how I would need to modify other parts and do so with less iteration because of what I had learned from the DFM analysis in the quotes. I would submit these new parts and quickly get feedback that I was on the right track while still making sure that features I had overlooked were brought to my attention.”

An Argument For Moulded Prototypes

Early concepts for the drone were made out of 3D-printed parts of SLS (selective laser sintering) nylon, Perez explains. “We prototyped and manufactured with 3D-printed parts.” At the time, this made sense, “because SLS parts were not bad, and the volume of parts we were producing at that time did not justify us going to moulded parts and using the big, expensive moulding houses to make steel moulds.”

However, Perez says, “Protolabs changed our minds on this.” Why?

“What it came down to, we wondered if shifting to injection-moulded nylon would improve batch consistency,” he explains. So, Perez says he quoted a few injection-moulded parts “just to get an idea of what it would cost to get injection moulding done. Basically, it was a feasibility study for me, to see if I could convince our leadership to justify taking this step, especially since our quantities [drone orders] were increasing.” This was the point in the process when the DFM element in the automated quoting system helped Perez to create designs for injection moulding, and convinced him that they could afford injection-moulded parts for the drone. “Leadership came back and said, ‘let’s do this.’” 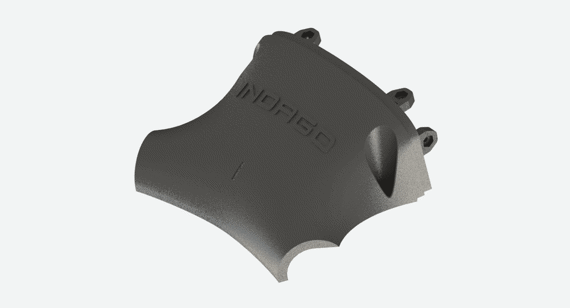 This CAD model shows one of many parts Protolabs fabricated for the drone, which are made of an impact-modified nylon.

The shift was made. Protolabs’ injection moulding service is now used for both prototyping and low-volume production for the Indago 2, the latest version of the drone, Perez says, with the thermoplastic parts fabricated out of a durable, engineering-grade nylon material. Originally, the parts were made out of SLS Nylon 12. Now the company is injection moulding out of an especially strong Nylon 66, which has improved the overall strength of the parts. The Indago 2 was launched in December 2015.

Perez says he and his colleagues are pleased with the results, and couldn’t resist mentioning, one more time, the speed element. “In four months, we went from making the decision to switch to injection moulding to having the final products in hand and having them assembled.”

Plans for 2016 include “ramping up” production of the Indago 2, Perez says, to satisfy current and future customer orders.

Teaming Up To Save Lives

A partnership was announced in 2015 between Lockheed Martin and Project Lifesaver International, which will help with humanitarian search-and-rescue efforts. The Indago drone will be integrated with a lightweight antenna and receiver developed by Loen Engineering. The system will allow Project Lifesaver agencies and first responders to rapidly locate special-needs individuals who have wandered from their homes.