Modern science has allowed surgeons to fix the human body amazingly fast, yet leave behind only small traces where repairs were performed. One of the more commonly used methods to achieve this is by a minimally invasive technique called laparoscopic surgery, where small incisions are made into a patient’s skin, a laparoscope is inserted to provide a magnified view of the patient’s organs, the procedure is performed, and the incision is closed by stitching or surgical staples. You can have your gallbladder removed before breakfast and be binge-watching Netflix from the comfort of your couch by dinner.

Typically, the small openings created during laparoscopic surgery are closed in one of two ways: manually stitching subcutaneously (beneath the skin) with a bio-absorbable, thread-like material and a curved needle that moves from one side of the hole to the other to close it tight, or with a surgical stapler that inserts metal staples into the skin to close the wound. The first technique is more time consuming, but leaves less surgical evidence. The latter method is faster, but can cause scarring and infection.

Chuck Rogers, Ph.D., and Kenneth Danielson, M.D., of Massachusetts-based Opus KSD, have spent the past several years developing and eventually launching to market, with help from Protolabs, a surgical tool that combines the best of both worlds: the ease of a stapler with proprietary bio-absorbable subcutaneous fasteners.

“General surgeons are finding themselves under pressure because the user-friendly metal staplers that became very popular in the 1990s are not cost effective,” explained Rogers, CEO of Opus and a biomedical engineer. “When people really began doing cost analysis, the five minutes that a surgeon saved in the operating room did not compensate for the fact that the patient still had to come back to have the staples removed.”

Danielson, a Harvard physician with more than 30 years of surgical experience, approached Rogers with a concept for a new stapler and shortly thereafter the two began development on the SubQ It! skin closure system—a disposable, handheld surgical stapler that delivers bio-absorbable fasteners beneath the skin with one click of the device.

The first step in development was to design, build, and test the tiny fastener, since that would ultimately guide the design of the actual device. Rogers and Danielson worked on refining the fastener, including elements such as its distinctive shape, the length required to suture properly, the number of barbs it would need, and other critical features. Due to the extremely small size of the SubQ It! fastener with a mass of only 0.0064 grams, they were 3D printed by both the extrusion process of fused deposition modelling (FDM) and laser-curing method of stereolithography (SL).

After Rogers and his team knew what the fastener itself would look like, development of the multipart device began. “Like the fasteners, we initially used FDM and SL on the delivery device in order to inexpensively modify the parts as the device evolved,” Rogers said. The SubQ It! stapler is composed of nine plastic parts, including two exterior shell halves, a plunger operated by the user, and internal parts that feed the fasteners. Protolabs manufactures all of them through injection moulding.

However, before a shift from additive to injection moulding was made, Opus had each part milled through Protolabs’ CNC machining service. The milled parts were designed as if they were being moulded, with proper draft built in, so the form, fit, and function of the device could be studied before tooling up for moulding. “Once we put the prototypes together, we could test to make sure the fasteners were feeding correctly, and if the sliding action of the plunger was operating smoothly without jamming. If there were any problems, we would modify the part and have another one machined,” Rogers said. “Once everything was working, we made moulds.” 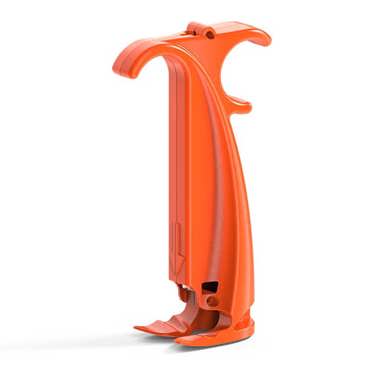 Although the design remained consistent from machining to moulding, the material employed did not. In the stapler’s first iteration, the material used for the machined parts closely resembled the resin that would be used to mould it, but they discovered that surface finishes between processes varied. In subsequent iterations, they switched to machined acetals like Delrin, for example, even though final parts would be moulded in an FDA-approved Lustran ABS, which provides more structural rigidity and can handle gamma sterilisation.

“Most of the parts were only modified one or two times, and we were really pleased with being able to match the performance of the mould to what we achieved in the machined parts,” Rogers said.

The last few years have been busy for Opus, getting trademark approval for SubQ It!, gaining additional patent protection, and eventually garnering FDA approval for use in “abdominal, thoracic, gynecologic, orthopedic, plastic, and reconstructive surgery”—all while scaling up for manufacturing in parallel. Now on the market, SubQ It! production is currently being increased to meet the rising demand for the product.

Additionally, SubQ It! has plans to expand to the veterinarian field. Rogers said that even if pet owners don’t care if scarring is visible on their pet’s skin, the benefit to vet and pet owner is the time and money saved from not having to return to the clinic to have the staples removed since they will have dissolved. Also, because SubQ It! fasteners are underneath the pet’s skin, the potential for biting or scratching them is reduced, which may in turn reduce the chances of having to don the unflattering Cone of Shame.

The SubQ It! system is designed to make life easier for surgeons and better for their patients, whether human or animal—something Protolabs is always excited to help accelerate.