Since 2003, Protolabs has been offering the option of side-actions (often called "side-pulls" or "cams" or "cam-actions"). Starting with a few here and there, Protolabs now produces thousands of moulds with side-actions each year, allowing us to mould more complex parts and support your geometry even better than before. 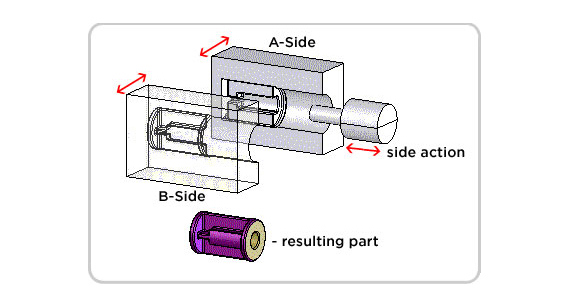 Figure 1: Side-actions must be perpendicular to the primary (A and B sides) pull direction.

The purpose of side actions is to enable undercut geometry; in other words, to mould parts that could not otherwise be made in a straight-pull mould. In straight-pull injection moulding, the A-side and B-side of the mould open and the completed part can be removed by pulling it straight out of either side. An undercut is a feature in the part design that would prevent the part from releasing out of the mould (part of the mould cavity is undercut in such a way that it grips the moulded part). To release a part whose design includes undercuts, the mould surfaces that create the undercut geometry in the part must be pulled out of the part before it is ejected; otherwise the part will be stuck in the mould. A cam device in the mould is used to pull the side-action mould surfaces away from the undercut features allowing the part to be released from the mould (see Figure 1).

Currently, Protolabs can use up to four side-actions on a part. These side-actions must be on the exterior parting line of the part, and there are some restrictions to the size of the cam feature and length of travel. These size requirements can be found in our design guidelines. Cams will increase the cost of the mould, but they also increase your design options and reduce secondary operations, thus potentially reducing the cost of your overall project.

While side-actions are primarily used for forming undercuts such as holes for cables, vent holes for internal fans or slots for assembly, there are some additional applications for them such as making tall, thin parts with a core—a test tube with minimal draft, for instance. If you were to mould a test tube using just a core and cavity (see Figure 2), the mould might require additional draft and wall thickness to permit it to be milled and to allow for ejection. On the other hand, if you lay the test tube down, placing the parting line down the length of the test tube (see Figure 3) and form the inside core of the tube with a side-action, you can eject the part on its side and reduce the required draft. This also allows the gate to be placed on the closed end of the test tube allowing for a uniform fill of the cavity and balanced pressure around the side-action core pin. 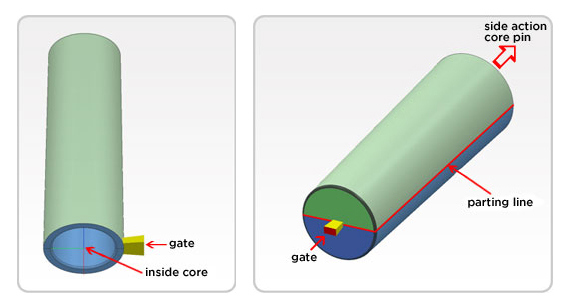 Figures 2 and 3: Side-actions used to create inside cavity of test tube.

Additional uses of side-actions may include creating sharp edges on outside corners and reducing draft requirements. You can also add text or logos to the exterior shell of your part, or add recesses for decals. Side-actions can be a valuable addition to your parts design tool chest, allowing you to produce parts with more function.

Protolabs uses software that automatically helps to decide if a side-action is needed for your part, and how to design it, so you need only upload a part with your desired geometry—you don't need to know how to make a side-action to take advantage of this capability. For general information on side-action cam requirements or Protolabs capabilities in general, go to our design guidelines page, or call a Protolabs applications engineer at +44 (0) 1952 683047 with questions. *