Multi-cavity moulds can boost production and trim costs, but only after certain 'tweaks' are made to the part

Moving from a single cavity mould to one that produces two, four, or eight parts at once seems like an easy way to increase production volume and reduce part costs. This can be true in many cases, but only if the right steps are taken and the requisite homework done first. Designing a part for multi-cavity moulding is not as simple as copying the CAD file for a single-cavity mould multiple times.

The physics encountered when forcing molten plastic through a mould’s sprues, runners, and gates change as moulds become larger and more complex, something that can impact moulding performance and part quality. Also, thermal variations within a multi-cavity mould body become more of a concern, and plastic must travel longer distances to reach the finish line, both of which increase the risk of partially-filled cavities and sink as well as part deformation after ejection

When moving from single- to multi-cavity tooling, it’s important to recognize that parts that behave perfectly in a single-cavity mould might not play well with others, at least not without first making some tweaks to the part, the process, or even the material.

One of these tweaks is the gate. Cattle gates, child gates, Gate E24 at the airport—each is designed to control traffic. The gates used in plastic injection moulding are no different. They allow molten plastic to flow into the mould at the beginning of the injection cycle, and then hold it under pressure until the mold cools, the plastic has solidified, and the part is subsequently ejected. 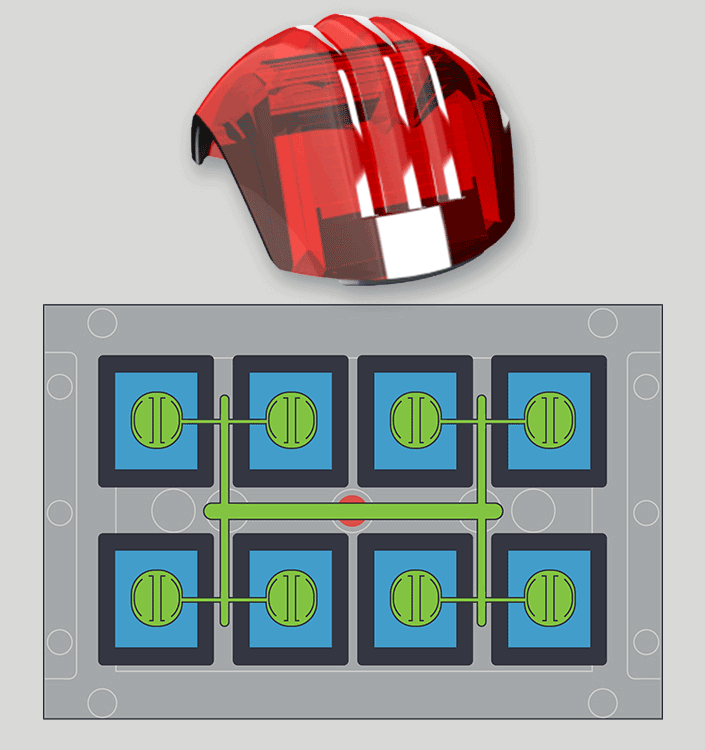 In the first image, a single 3D CAD model of a lens is shown before it moves into the multi-cavity mould show in the second image.

In mouldmaking, there are more types of gates than there are players on a baseball team. Protolabs relies on three. Pin-style and hot tip gates are often employed on single-cavity moulds to solve challenges with complex part geometries and to reduce gate vestige—the small remnant of runner material that must be trimmed from the finished workpiece—but these are rarely if ever used on multi-cavity moulds. Here, tab gates (also known as edge gates) are the rule. Not only is gate placement far more flexible—something very important when trying to squeeze multiple parts into a mould—but the larger vestige that comes with tab gating works well to absorb residual flow stress around that section of the mould.

Another example where costly part redesign can be avoided when making the jump to multi-cavity is gate placement. Consider a mould for a plastic water bottle lid. Initial limited production expectations might dictate placement of the gate in a single-cavity mould gate at a certain mould location. But when production ramps up and the head of supply chain decides it’s time to invest in a multi-cavity tool, the original gate location may be impossible to achieve due to the changes in part orientation required for multi-cavity moulding. By discussing product expectations with Protolabs’ applications engineers early in the design cycle, hiccups like this can potentially be avoided.

Note that we also advise against designing your own runner and gate system to create your own multi-cavity tool—Protolabs can help facilitate the design of your multi-cavity mould.

Similar situations can occur with a side-action. Let’s say that you’ve designed a lightweight bobbin with holes like Swiss cheese running through each flange to reduce mass. This is a perfect use for side-actions, which slide into place prior to the plastic entering the mould—thus restricting material flow—and pop back out before part ejection. While side-actions can work great for a single-cavity mould, this sewing machine accessory most likely wouldn’t qualify for multi-cavity tooling due to that very requirement.

Manually loaded inserts, or pickouts, should also be given careful consideration. Placing a small block of metal into a mould cavity to create a cutout on an internal feature, for example, is fairly straightforward in single-cavity moulding. That same approach on an eight-cavity tool, however, is time-consuming, and should be avoided if large quantities are in your product’s future. If this is the case, let us know and we’ll help you design a more efficient mould from the start. 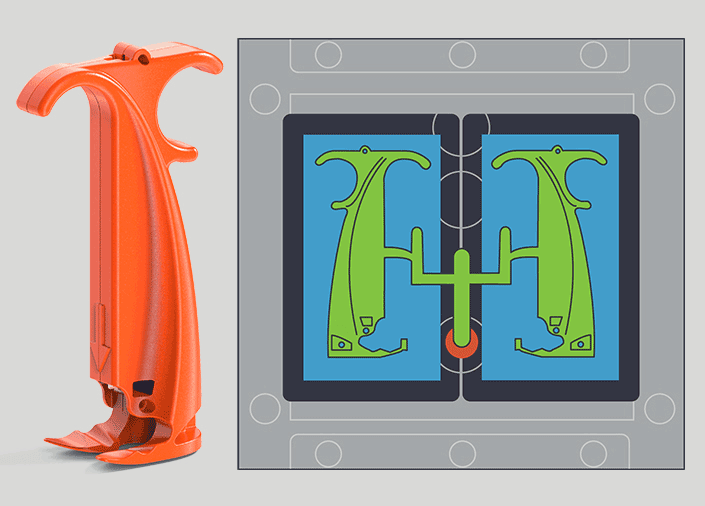 Customers at Protolabs occasionally employ family moulds for low-volume production needs. This type of mould is used to manufacture different components of a multi-part assembly, or multiple variations of a single component, in a single shot. If you’ve ever assembled a plastic model of a Ford Pinto as a kid (or a “Star Wars” TIE-Fighter replica as an adult), you’ve handled family-moulded parts. If this is the approach you want to take for your project, be prepared for some additional work and a greater tooling investment.

Materials that flow well, like liquid silicone rubber (LSR), are typically well-suited for a multi-cavity situation. Because silicone flows more easily than nickels at a Las Vegas casino, most of the challenges faced with multi-cavity and family moulds are greatly reduced. If your project requires a flexible material with excellent strength and dimensional stability, good performance at extreme temperatures, chemical resistance and biocompatibility, LSR is a solid option.

In addition to the design elements unique to multi-cavity tooling, there of course are common injection molding guidelines to keep in mind like draft, wall thickness, material choice, and surface finish. The likelihood of success increases—especially as the number of cavities increases—with part designs that account for these variables and others. See our recent Design Tip on leveraging low-volume injection moulding for a more thorough examination of design considerations for plastic injection moulding.

The bottom line is this: Efficient injection-moulded part design is about reducing part costs. This is true whether you’re making 5,000 parts or 5 million. Some designers and manufacturers aim to shortcut the mould development cycle by jumping feet first into multi-cavity tooling, skipping the critical prototyping phase. Protolabs advises against this approach, not because we want to sell you another mould, but because testing parts using a single-cavity mould is an excellent way to vet design, improve quality, and likely save some money in the long run. Some customers test multiple iterations of the same moulded part in parallel with multiple single-cavity moulds, select the winner, and then move into a multi-cavity mould. This can increase your overall speed to market by helping you avoid development speed bumps along the way.

All of the aforementioned design considerations for multi-cavity molds can be discussed with a Protolabs customer service engineer, at +44 (0) 1952 683047 or [email protected], who can help direct you to the right tooling.