This week we are going to talk about Multicavity tooling for injection moulding. 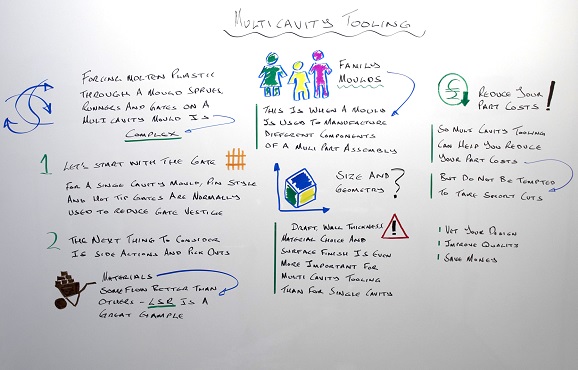 On the face of it, moving from a single cavity mould to one that produces two, four or eight parts at once seems like a simple way to increase production and reduce your part costs. Well sadly it’s not always simple. Designing a part for a multi cavity moulding is not as easy as copying the CAD file for a single cavity mould over and over again.

Forcing molten plastic through a mould sprues, runners and gates on a multi cavity mould is complex.  There are also thermal variations in a multi cavity mould because the plastic has to travel further to get to the end.  All of this can leave you with partially filled cavities, sink and part deformation after ejection.  And we really don’t want that, do we?

To avoid this, you may need to make some tweaks to the part, the process, or even change the material.

Let’s start with the gate.

The gate allows plastic to flow into the mould at the beginning of the injection cycle and then holds it under pressure until the mould cools and the plastic solidifies.

In mould making there are lots of types of gates. For single cavity moulds, pin style and hot tip gates are normally used to reduce gate vestige, which is the small remnant of material that needs trimming from the finished part.

This makes sense, but we would advise you against these for multicavity moulds and recommend tab or edge gates. You can position this type of gate in more places, which is important when you are trying to squeeze several parts into a single mould.  It also produces a larger vestige, which is a good thing in this case because it absorbs the residual flow stress around that section of the mould.

You also need to think about where to place your gate. This is because you are trying to squeeze multiple parts into the mould and its position may affect their orientation.

It’s complex designing a runner and gate system for multicavity tooling, so think about getting your supplier to do it for you. 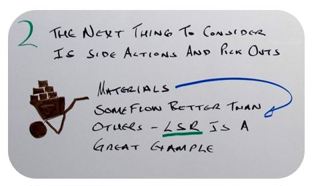 The next thing on my list to consider is side actions and pick outs.  Side actions slide into place before the plastic enters the mould to restrict material flow and pop back out before the part is ejected. This simply does not work in multi cavity moulding.

You should also think carefully about manually loaded inserts or pick outs. While placing a small block of metal or a pick out is simple in a single cavity mould, it becomes time consuming and costly if you need to do it several times.

A better approach is to speak to your supplier and work with them to design a more efficient mould.

Right let’s move onto material. This a quick and simple one.  Some materials flow better than others making them more suitable for a multi cavity mould. Liquid silicone rubber is a great example of a free-flowing material and could be a good choice depending on the function of the part. 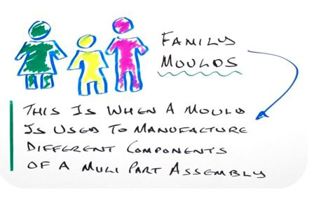 Now I’d like to tell you about a special type of multi cavity tooling, a family mould.  This is when a mould is used to manufacture different components of a multi part assembly or multiple variations of a single component.  If you have ever assembled a plastic model of a spitfire when you were a kid, then you’ll know exactly what I’m talking about.

This type of moulding brings its own challenges and I’m sure it’s a topic that we will consider in a future video. Briefly parts need to be of a similar size and geometry. It generally involves extra work and a bigger tooling investment.  If you are after larger production volumes then it could be worthwhile, if not then it may be worth exploring other options with your supplier. 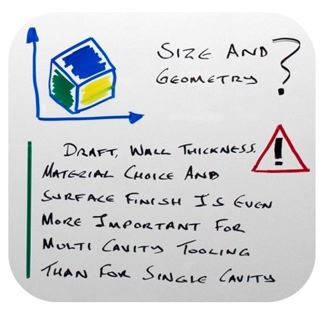 All my design tips to this point have been about the specifics of designing multi cavity tooling, but the same general rules for designing a part for injection moulding hold true.  In fact, thinking about draft, wall thickness, material choice and surface finish is even more important for multi cavity tooling than for a single cavity, because it’s a lot harder to get it right.

It’s well worth looking at some of our other Insight videos, where we deal with these and other design considerations. 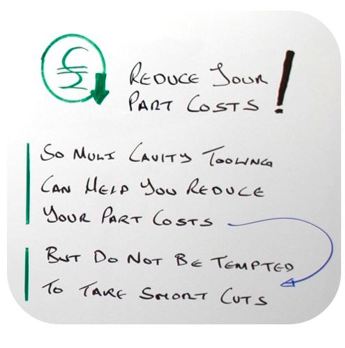 So multi cavity tooling can help you reduce your part costs, but do not be tempted to take shortcuts such as jumping straight into multi cavity tooling without prototyping first.  If you test parts in a single cavity mould first you get to vet your design, improve quality and probably save money in the long term by getting the right answer.

If you do want to explore multi cavity options then it is vital that you let your supplier know and work with them from the beginning, it will help you avoid a lot of pit falls.

That’s it for this week, so I’ll bid you goodbye until next Friday. 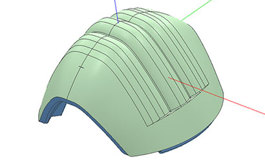 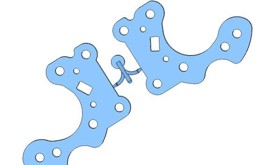 Family tooling can be used when the parts need to be of a similar size and geometry and be small enough to fit within the confines of a standard mould.
Read Design Tip 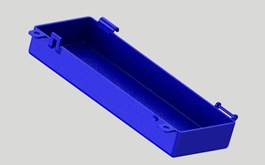