The geothermal industry is hot and getting hotter—literally.

Think of the industry in two pieces, old and new geothermal. Old geothermal has been around for more than 100 years and takes advantage of naturally occurring steam coming out of shallow ground. Pressurized steam through turbines produces electrical current. However, old geothermal can’t really grow because most of those shallow ground steam vents have already been capped.

Digging deeper and installing wells that go far below the surface, to find hotter, super-heated rock to produce steam—rock that can be accessed through engineered geothermal systems (EGS)—is where the new geothermal comes in.

However, this form of new geothermal has not, for the most part, been tapped into yet. Why? Mostly because no one has invented or developed equipment that works effectively in that super-heated environment. It’s not the depth that’s the challenge, it’s the heat.

And just how hot is it way down there? The temperature of the rocks at this level is about 700 F. That’s why the geothermal industry is fond of calling it, “the sun beneath our feet.”

Challenge: A Need for Heat-Resistant Tools

With this important new energy resource remaining largely unused, the U.S. Department of Energy (DOE) recently challenged engineers and scientists from the oil, gas and geothermal industries and beyond to solve these heat-related problems.

To spur innovation in this field, the DOE sponsored the American-Made Geothermal Manufacturing Prize, a $4.65 million competition. With a special focus on 3D printing (additive manufacturing), the contest aimed to motivate innovators to address the challenges associated with operating sensitive equipment in harsh geothermal environments.

Teams would develop, test, and revise prototypes using additive manufacturing to support the advancement of geothermal tools and technologies.

Ken Havlinek and Tingji “TJ” Tang, two design engineers and product developers who are longtime veterans of the oil and gas industry, formed the Houston-based startup Downhole Emerging Technologies (DET) about three years ago. Ultimately, they decided to participate.

Among a number of geothermal tools and equipment that are needed, DET chose to pursue developing a packer or plug system.

Generally speaking, in the oil and gas and geothermal industries, a packer or plug system is used in much the same way as a plumber uses a plug to regulate or stop the flow of water. A packer or plug for industry applications can be used in all types and sizes of casings and tubes.

Multiple designs and iterations ensued, but a basic challenge to overcome was the material used. Existing packers used in the oil and gas industry are made of rubber or plastic. “That’s the standard today in the industry, rubber or plastic. But those materials can’t survive geothermal temperatures,” said Havlinek. Accordingly, a metal packer system was needed.

Meanwhile, the DOE’s contest, which included several steps and multiple deadlines over the year-and-a-half competition, kept moving swiftly toward the finish line. Havlinek and TJ needed a solution—and fast. 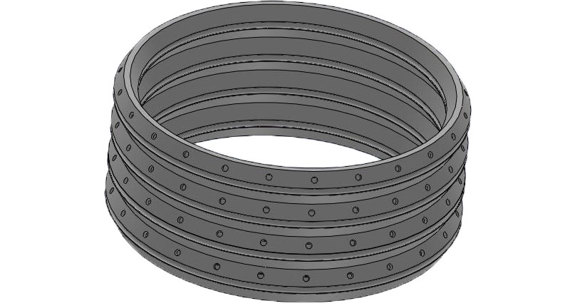 A CAD model of a critical element in the ETIP tool. The accordion-like structure allows the packer system to be deployable and retrievable.

“I knew I needed metal and direct metal laser sintering was the answer,” said Havlinek. After looking around on the internet for a DMLS source and asking other engineers in the industry, he chose Protolabs, using our web portal to load CAD models of the parts and components he needed.

“The DFM (design for manufacturability) and the interactive quote system was extremely helpful and efficient,” said Havlinek. “I loaded up my parts, the system gave me quick feedback, identified errors, and generally speaking, within 24 hours I got a quote on my latest design iteration, which was great.”

Speed was especially crucial during this time. “The DOE program was aggressive and fast moving, so being able to get quick quotes was key. I didn’t have time to burn,” said Havlinek. “Not only did additive manufacturing allow me to fabricate what I needed because it was something that couldn’t be machined, but the overall prototyping speed of getting parts was faster than what machining could have done. That fast turnaround was critical.” With the help of funding from the DOE program, the Diamond ETIP (Extreme Temperature Isolation Packer) went from concept to working prototype in under two years. The primary goal was to develop a packer system that was easily deployable and retrievable. The system works somewhat like an accordion-type structure, or a crushed soda can. The motion of the packer in that fashion is what is used to seal itself within the tube or casing.

Accomplishing this mission came down to the internal features of the ring design. While one would assume it is hollow within the ring’s outer walls, the design under the surface allows the packer system to deform in the most efficient manner. These features meant that less force was required to compress and stretch the ring while getting the same deformation and performance. Additive manufacturing offered the design freedom for the team to get creative and push the features of the structure beyond what machining could achieve.

“Without those features, it would have taken a lot more energy to get the job done and we wanted to use as little energy as possible to achieve the full range of motion required during the operation of the packer system,” said Havlinek. “The smaller the amount of force required, the better. Thanks to additive manufacturing, we were able to reach our design targets.” 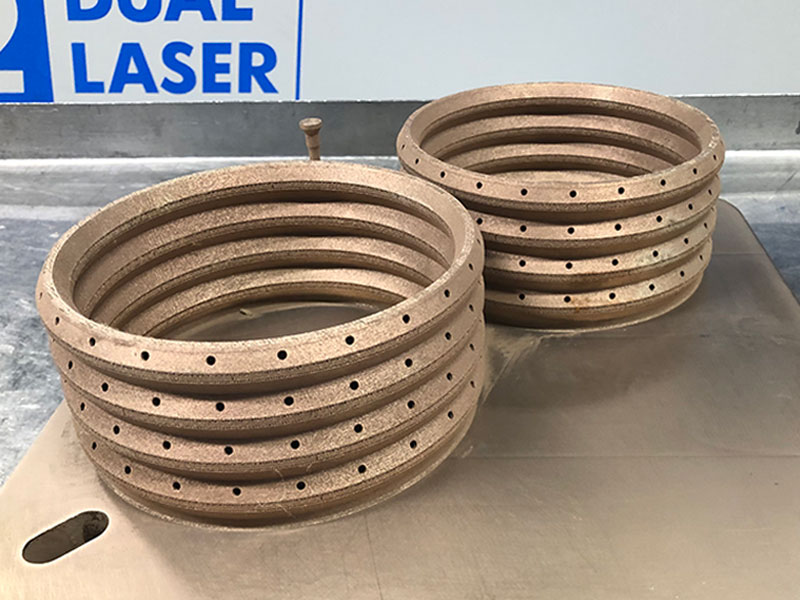 Parts on a platform after heat treatment. 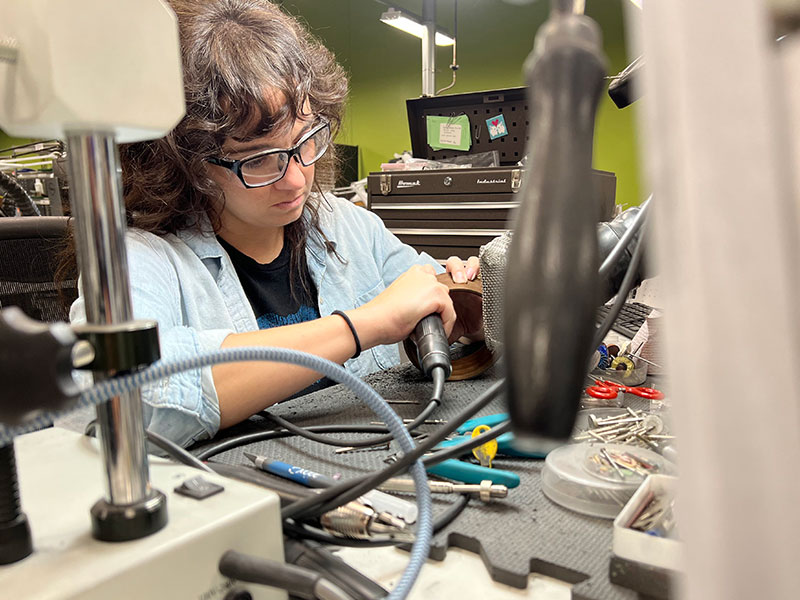 Detail work removing the support structure from the part.

“I loaded up my parts, the system gave me quick feedback, identified errors, and generally speaking, within 24 hours I got a quote on my latest design iteration, which was great.”

Our X Line 2000R printer from GE Additive handles large-scale metal printing jobs like the one required for DET. An early DMLS iteration of the sleeve for the tool was produced in Inconel 718 on the machine and ended up being the tallest DMLS 3D printed part ever made at Protolabs, coming in at 19 in. (482.6mm) tall, with an outer diameter of more than 4.7 in. (119.4mm). Post-processing on each part included stress relief and some machining to thread each end of the part.

Other smaller parts made on GE Additive M2 machines were expansion rings. Some were single and others were stacked up together as one part in smaller pieces. The rings were printed in stainless steel 316L and some in 17-4 iterations. Each part was solution annealed and cut off from the 3D printer using electrical discharge machining (EDM). The 17-4 parts, specifically, went through H900 surface hardening.

In total, five iterations and 20 prototypes were done for DET.

Hard work and rapid prototyping paid off for DET. The company was one of two grand prize winners of the DOE manufacturing competition, which meant a $500,000 cash award plus $200,000 in vouchers that can be used for future iterations and development of the ETIP tool.

That future development will include further building, testing, and iterating with Protolabs as DET moves the tool toward a market launch. “There’s a lot of work now between innovation and marketplace,” said Havlinek. “DOE and its work to spur innovation helped get us started and now we are working to get our invention advanced enough to go and find a company to start using it.”

As for a timetable, Havlinek said DET is aiming to have their tool fully developed and ready for market launch by the end of 2023. 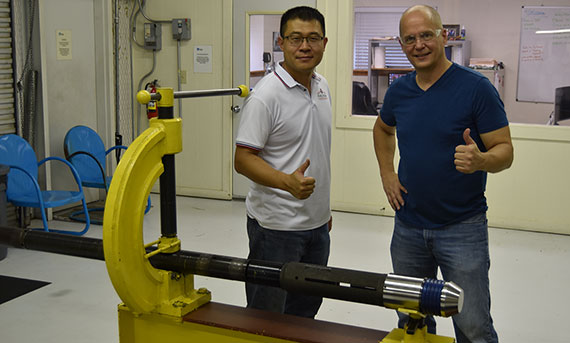