Fans of “CSI” know the drill: evidence goes into the crime lab's gas chromatograph, the high-tech machine rapidly identifies whatever is in it and a dramatic arrest ensues—after a commercial break.

The gas chromatograph can indeed identify what may be hundreds of different molecules in a given sample. But what the TV show fails to explain, is that determining the amount of each compound with a gas chromatograph (GC), which separates molecules in a sample, and an accompanying flame ionization detector (FID), which detects those molecules, is both time-consuming and expensive.

Detectives may not need that detail. But knowing how much of a particular molecule is in a sample is critically important to analyzing potential new biofuels as well as pharmaceuticals, foods, fragrances, chemicals, and petroleum-based fuels and pesticides, according to Andrew Jones, partner and co-founder of Activated Research Company, a catalyst start-up in Eden Prairie, Minn. "This is new technology that is revolutionizing and disrupting the way people think about analyzing samples. Unfortunately we don't have quite the magic box that they portray on TV," Jones says of the GC-FID technology. "It's not that easy."

Instead, what Activated Research Company offers is a small, stainless steel block—the Polyarc™ catalytic microreactor. The Polyarc™ reactor, integrated into a GC-FID system, quickly quantifies carboncontaining chemicals in a sample. Better yet, the Polyarc™ reactor does so, Jones says, without the slow, costly calibrations otherwise required to count molecules with GC-FID systems, widely used but largely unchanged for the past several decades. "This device helps scientists do those analyses quicker, easier, and cheaper than they could before," Jones says of the Polyarc™ reactor. "This is new technology that is revolutionizing and disrupting the way people think."

“The reason we chose 3D printing as opposed to machining is that we could never get the attention to detail, the small geometries of the internal channels in there with traditional machining techniques.” 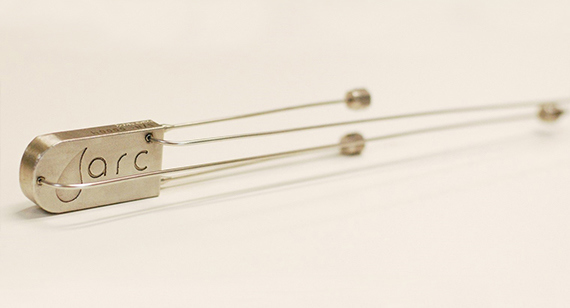 The idea for what would become the Polyarc™ reactor originated with researchers at the Catalysis Center for Energy Innovation led by Paul Dauenhauer, a professor of chemical engineering and materials science at the University of Minnesota. Dauenhauer's group published a paper proposing a "quantitative carbon detector" based on their research, which received funding from the U.S. Department of Energy's Office of Basic Energy Sciences.

Dauenhauer and some of his students built a version of the detector using machined parts and off-the-shelf tubes and fittings. Activated Research Company began its prototyping with similar materials and had mixed results. "Those were bulky, they were large and they didn't lead to a finished product," Jones says. "Not only was it not visually appealing, it had undesirable performance characteristics due to the machining process."

For a commercial reactor, Jones envisioned a prototype that was both smaller and offered greater temperature control, ideas he discussed with Cleveland. Jones and Cleveland had met through a mentorship program while Jones was earning his degree in chemical engineering and chemistry at the University of Minnesota. They stayed in touch as Jones completed a doctorate degree in chemical engineering at the University of California-Berkeley. The two teamed to launch Activated Research Company in 2014, with Jones leading technology development and Cleveland overseeing business strategy.

The design of the smaller reactor—a 2-inch by 1-inch block with a heater, a temperature measuring device, multiple channels, and separate reaction chambers—created challenges in prototyping with machined parts.

Cleveland suggested using Protolabs' DMLS service, an industrial metal 3D printing process that Jones knew little about, to make prototype parts for the Polyarc™ microreactor. Jones' experience using an in-house desktop 3D printer to produce the intricate geometries that the interior channels of the reactor would require persuaded him to give DMLS a try.

The early results from DMLS prototyping convinced Jones to choose that process over machined parts for the Polyarc™ reactor. "The reason we chose 3D printing as opposed to machining is that we could never get the attention to detail, the small geometries of the internal channels in there with traditional machining techniques," Jones says. "We really had to go to 3D printing to get those small geometries and those connectivities to make it such a small package and allow us to do the chemistry that we want to do. 3D printing also allowed us to control the flow dynamics so that we're having the right sort of mixing that we need."

Activated Research Company went through more than 20 DMLS iterations of the Polyarc™ reactor to arrive at its final design. One potential concern dispelled along the way, Jones says, was that Polyarc™ reactor parts made with the DMLS process would have greater potential to leak than forged metal parts.

"I was a little worried that the 3D printing might lead to porosity that could let gases leak out," Jones says. "We are thoroughly testing each part ... to make sure this new technology of 3D printing will work for a high-temperature, gastight application. Because there's no precedent for this that I know about for chemical reactors."

The laser sintered parts from Protolabs typically arrived in less than a week and "not for a huge, exorbitant cost," Jones says. Protolabs' DMLS parts do cost more than machined ones but the turnaround on getting those made typically is longer. "We're obviously using it and that's testament enough that it works," Jones says of the DMLS process. "We've been happy with the performance."

In addition to accommodating the reactor's internal geometries, the DMLS process enabled Activated Research Company to customize its exterior. "Because you're printing, you can print any external design that you want," Jones says. "So we have 'patents pending' on here, we have our logo, the name of the product, something that you'd normally have to stamp on. It just prints it right on." 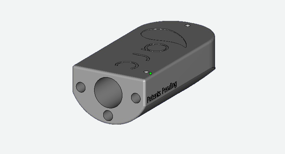 A 3D CAD model of the Polyarc™ reactor illustrates some of the challenging text and through holes that DMLS builds with ease.

Scaling Up To Production

Activated Research Company's use of DMLS parts has gone beyond prototyping to full production of end-use parts for the Polyarc™ reactor. The company is choosing the performance of DMLS over the economies of scale machining could offer, Jones explains: "We are able to justify that because we are making a high-value product."Protolabs' online parts quoting system has been useful in prototyping and production, especially its reorder feature, Jones says.

"I used the quoting system when I was rapidly prototyping and making changes, and that was quick and able to keep up with our demand for parts," Jones explains. "Then when I needed to go into production, I could just repeat the latest prototype and go right into production with it. We're happy with the ability to do one-off parts when we need them but also to scale up."

Jones is considering new reactor designs that would use laser sintering to produce parts in metals such as titanium and aluminum or alloys, at what he says would be little additional cost. Activated Research Company is working on new products as well and using Protolabs for some prototyping for those. "We move fast and so does Protolabs," Jones says. "It's a good match."

The Polyarc™ reactor appears to be a match for what some potential clients are looking for as well. In October, the Polyarc™ reactor won the new product showcase at the Gulf Coast Conference, which spotlights chemical analysis technology in the petrochemical, refining and environmental fields. It took the conference's 2015 Best New Product Award honors, recognized alongside new analytical instruments from industry giants such as Thermo Fisher Scientific and Agilent Technologies.

"People are very interested and we are very excited about all the demand that is coming," Jones says, with Activated Research Company seeing the petroleum industry as a big potential market for the Polyarc™ reactor.