Stopping to recharge your smartphone takes the mobile out of having a mobile device. Charging up doesn’t have to mean slowing down, though, with a new kinetic energy charger known as AMPY. The compact wearable device—strapped to an arm, leg or hip or carried in a backpack or messenger bag—captures and stores kinetic energy from walking and other daily physical activities to provide hours of charging power for a typical smartphone user.

AMPY solves an issue familiar to busy smartphone users who want to stay connected while on the move. Those would include the Chicago-based start-up's founders, a trio of doctoral candidates in engineering at Northwestern University in Evanston, Ill.

“We thought, why can't we use some of that energy from things we love doing to recharge our smartphones?”

“It wouldn't be the end of the day yet and our smartphone batteries would nearly be dead,” AMPY CEO Tejas Shastry says. “For us, as young, active urbanites, our smartphone is an essential piece of our lives. We’re also pretty active people. We bike to work. We walk a lot in an urban setting. We go on runs. So we thought, why can't we use some of that energy from things we love doing to recharge our smartphones?”

When they looked at the marketplace for an answer, Shastry and co-founders Mike Geier and Alex Smith found no device that would generate enough energy to be useful and at the same time small enough for a user to wear or carry all day. Other devices were big and bulky, roughly the size of a paper towel tube. “One of the first things we realized was that they were the wrong size and the wrong form factor to fit into the daily lives of our target market,” Shastry says.

Shastry and his classmates began developing and prototyping the AMPY in 2013, as students in an entrepreneurial class at Northwestern. The team has made dozens of prototype iterations, tested the product extensively, and engaged consumers in hundreds of interactions in which they have run or walked to try different form factors. As work has continued toward a planned full-market online release in 2015, they've gotten help from two accelerator programs and have raised more than $300,000 in a Kickstarter campaign, tripling their crowdfunding goal.

Another boost came from a Protolabs Cool Idea Award that furnished the tooling and subsequent low-volume injection-molded production run for the plastic AMPY bobbins housed inside the device. Those parts will go into devices shipped for initial consumer testing as well as for perks that upper-level crowdfunding contributors receive.

“What Cool Idea will help us to do is have some injection-molded parts to use for our pilot run as well," Shastry says. “We came up with our own architecture for the internal components within AMPY and did a lot of customer development to find the right form factor and size, and to deliver a significant amount of power.”

AMPY’s patent-pending, proprietary linear inductor was a key part of the prototyping effort. The user’s motion drives a magnet and coil system that generates electricity, which goes into a lithium ion battery for storage. Plug an iPhone, Android phone or other wearable device into AMPY’s USB port to begin charging.

“How we've managed to design those coils gives a little more flexibility in the spaces that we can put them into and how much power we can generate,” Geier, AMPY’s chief technical officer says. “We've tried to make those as compact as possible while generating enough voltage and power to charge the internal battery.”

Shastry explains that they used 3D printing during early prototyping, employing a variety of materials and technologies like fused deposition modeling (FDM). The additive manufacturing used, however, worked well for only 10 to 20 prototypes, Shastry says. With injection-molded parts from Protolabs, AMPY will be able to able to produce more prototypes to deliver to customers in its pilot run and as contributor perks.

“All of the internal components fit into a casing and that casing is what we've designed to curve to wherever you're wearing it as well as to look simple and elegant,” Shastry says.

Shastry says the team is considering acrylonitrile butadiene styrene (ABS) or polycarbonate (PC) plastics or a blend for its casing. “We want the device to look nice, but because it’s a wearable technology so we want it to be durable and comfortable to wear,” Shastry says. 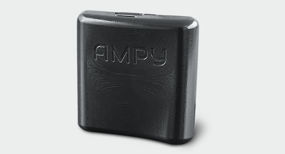 AMPY is aiming the device at active city dwellers who tend to be heavy smartphone users, particularly younger and middle-aged urbanites who are on the move, Shastry says. The device also may find fans in outdoor and fitness enthusiasts, businesspeople who travel for work, and concertgoers.

An AMPY smartphone app, which will launch with the final production run, will track the calories a user burns while moving and the energy they generate. An active urban user typically generates five hours of standby or an hour of typical-use charging time, Shastry explains.

“So you can see how much energy you’ve used to walk or run has been converted into usable energy for your smartphone,” Shastry says. "We think that’s a cool metric that really sums up fitness tracking and energy generation all in one.”

AMPY is now taking online preorders for projected shipment in July, according to the company's website. AMPY’s six-member team works out of 1871, a digital start-up incubator in downtown Chicago as well as Northwestern’s incubator at the Farley Center for Entrepreneurship and Innovation.