Simply tossing a ball can make dangerous places safer for police, firefighters, and other first responders—if that ball is the Explorer, a smartphone-enabled camera tucked inside a baseball-sized shell, developed by a Boston startup, Bounce Imaging.

Once the patented ball is rolled around a corner or down a darkened corridor, its six-eyed camera snaps images every half second in every direction until the ball comes to a stop. An image-processing algorithm in Bounce Imaging’s app assembles the images into a panoramic view for display on a mobile Android or iOS device. Swiping a finger across the device’s screen enables the user to look up, down, left or right before entering the space where the ball has landed. That lets the user effectively preview what’s around the corner or a down a hallway, scanning for bad guys or other threats, or assessing survivors or structural damage before going in and risking harm.

“First responders are telling us that every single day they go into dark, potentially harmful spaces where danger is ahead and they could use something to see into those spaces,” Bounce Imaging CEO Francisco Aguilar says. “The idea is to make it easier for first responders to help civilians but also to protect themselves from harm and to keep people from dying.”

The inspiration for developing the baseball-sized Explorer came to Aguilar as he followed reports of search-and-rescue teams using expensive, slow-to-deploy imaging systems to search for survivors of the devastating earthquake that struck Haiti in 2010. “Ninety percent of the rescues ended up being in the first 48 hours (after the earthquake),” Aguilar says. “So the game was basically over by the time the fancy equipment got there. We wanted to figure out a low-cost way for a volunteer using a smartphone to look inside a collapsed pocket without exposing themselves to harm.”

“The Explorer went on to earn a Time magazine ‘Best Invention’ award in 2013 and similar recognition the next year from Popular Science.” 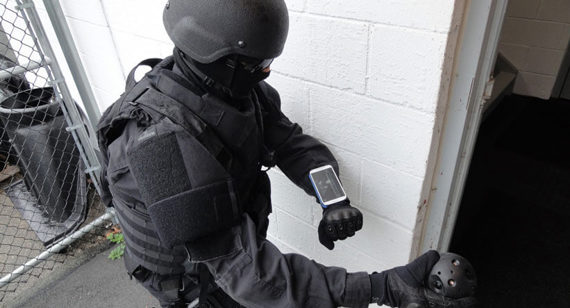 The Explorer streams panoramic images to a mobile device.

Aguilar and his partners in Bounce Imaging took their concept for a new product to MassChallenge, a Boston-based competition for early-stage companies, in 2012. They left with a Gold Award, $60,000 and a business. The Explorer went on to earn a Time magazine “Best Invention” award in 2013 and similar recognition the next year from Popular Science. The company has raised $1.5 million in financing and is looking for investors as it prepares to manufacture and release its first 100 models in July 2015.

The company’s name underscores a development challenge that Bounce Imaging has worked with Protolabs to address: That is, producing a ball-shaped shell to protect the device’s sophisticated camera, six symmetrically placed lenses and microprocessor as they work together to capture high-resolution, precisely timed images while the Explorer bounces down, say, a concrete hallway or staircase.

The solution was a ball design that incorporates three layers of materials to absorb the mechanical energy of each impact before it reaches any critical component. From the inside out, the layers consist of polycarbonate lens holders (“a little skeleton that holds everything together,” Aguilar explains), inside a polycarbonate ball-shaped shell, which is inside of an overmold of liquid silicone rubber or a similar material. Serious engineering on the product began in 2013, Aguilar says, with Bounce Imaging making parts for the ball from liquid plastics and liquid rubbers poured into molds made on a 3D printer. Protolabs machined aluminum prototype pieces to hold the lenses in place.

Using 3D-printed molds and liquid plastics, however, proved cumbersome and would not scale well. As an interim step, Bounce Imaging had 3D-printed parts made using selective laser sintering (SLS) services at Protolabs and other vendors. 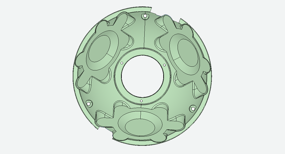 A CAD model of one half of the protective shell.

“It’s strong but it also does flex a bit so it absorbs some energy from the impact,” Aguilar says of the polycarbonate. “You can hit it with a hammer and it won’t break.”

Metal parts for the shell or lens holders would be heavier and more expensive and also would transfer mechanical energy from drops directly to the camera and lenses. “It just passes right through and that’s not good,” Aguilar says. “You’ve got to keep the lenses in the right orientation relative to each other. So it has to be strong enough to take a beating but flexible enough to not immediately give you the whole impact.” 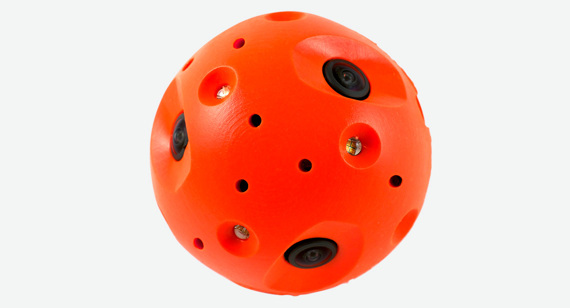 The final device touts a polycarbonate shell with a durable overmolded exterior.

Bounce Imaging easily went through dozens of prototypes to arrive at its production-ready product, says Aguilar, who laughs when asked to specify a number. Issues included fit, tolerance, impact absorption and manufacturability. “A lot of things that we did initially we could get away with by not being fully injection ready,” Aguilar says. “But when you go to production you’ve got to redesign for that and you’ve got to test for that.”

This is where feedback from Protolabs’ interactive quoting system was especially helpful as Bounce Imaging was designing for injection-molded parts, Aguilar says. “It points out where the issues are and we usually then call somebody at Protolabs to finalize the details,” describes Aguilar. “It lets you quickly see what parts are going to cost, what different materials cost. So it’s cool, it’s a useful tool.”

Bounce Imaging is positioning the Explorer for the law enforcement and industrial safety markets and has gotten input on the product from sources in both. The base model, with white LED lights for illuminating the space it’s tossed into while also briefly stunning a possible foe, retails for $1,500. One that has infrared lights retails for $2,500.

Keeping the cost below that of imaging systems with five-figure price tags has been an emphasis for Bounce Imaging throughout development, Aguilar says. He saw firsthand how low-cost technology such as cellphones could transform commerce and bring other benefits as he worked in Afghanistan and Kenya. Bounce Imaging works out of the Harvard Innovation Lab, where the company did some of its early prototyping, and has gotten startup advice from the Massachusetts Institute of Technology’s Venture Mentoring Service. A native of Costa Rica, Aguilar has a degree in government from Harvard, a master’s in public policy analysis from Harvard’s John F. Kennedy School of Government and an MBA from MIT’S Sloan School of Management.

The company, which has the equivalent of about five full-time employees, has engineers in Costa Rica, the Netherlands, Germany, and the United States.