At a business where a DipJar is present, customers simply “dip” or insert their card into the device to leave a tip in an amount set by the establishment. The DipJar, which houses a card reader, circuitry and software to complete the cloud-based transaction, displays the amount tipped and makes a “change clinking” sound to notify employees of the payment. DipJar also is positioning the device as a way for charitable organizations to collect donations.

“As people carry less cash, their tips are starting to dwindle. So we're coming out with an easy solution for people to give tips with just a single dip of a credit card.” 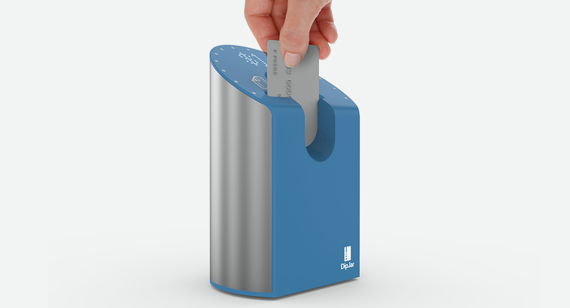 “More and more, it's a cashless society that we're entering into,” says Jon Fraser, DipJar’s director of hardware. “Service workers, who are often at the lower end of wage earners, depend more on tips. But as people carry less cash, their tips are starting to dwindle. So we're coming out with an easy solution for people to give tips with just a single dip of a credit card.”

DipJar co-founder Ryder Kessler got his inspiration for the product during his days as a Harvard student, when he spent long hours in coffee shops. He was surprised to learn from employees he befriended that a busy day was worse than a normal one because hurried customers paying with plastic had no way to quickly leave a tip, so serving more customers did not mean higher take-home pay for the day.

Those parts will go into devices shipped for initial consumer testing as well as for perks that upper-level crowdfunding contributors receive.

To prove the concept, the company made about 20 custom DipJar prototypes from cast urethane, Fraser says, with the 3D-printed molds for those prototypes being produced through stereolithography (SL). Using cast urethane is easy and inexpensive, in part because it avoids tooling costs, but has its limitations. 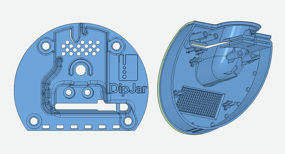 From left to right, 3D CAD models of the DipJar base and cap that were manufactured at Protolabs.

“Cast urethane is used for very small runs, from 10 to around 50 or so parts,” Fraser says. “It's pretty easy to print molds, but it’s just not good for large production runs.”

DipJar, which now has six employees, raised a $420,000 seed round announced in September 2014. The company’s leadership and software engineers work in New York City. Its hardware and firmware teams are in Boston, working out of Bolt, a venture capital fund that invests in and houses seed stage hardware startups.

DipJar assembled its second-generation devices at Bolt, Fraser says. In late 2014 and early 2015, the company made extensive use of Bolt's 3D printers to iron out design details of various plastic and metal parts for the second-generation DipJar.

“They're great for determining fit and function but they're not robust enough for production and you certainly can’t make parts cost effectively with them,” Fraser says.

Low-Volume Production in a Pinch

For a quick-turn production run of 500 second-generation DipJars that shipped this summer (June/July 2015), the company turned to Protolabs, which Fraser says made the tooling for and did the injection molding of three exterior parts of the device—the cap, faceplate and base—within two weeks.

DipJar was under pressure to produce components for its devices, and had its internal circuitry and other parts ready for assembly, Fraser says. But the company found itself in a “nightmare” situation, waiting more than three months for tooling and injection-molded parts from a supplier that ultimately never delivered.

“We couldn't wait any longer,” Fraser says of DipJar’s decision to switch to Protolabs. “It's frustrating but as a young company you only have so much runway. At some point we had to cut our losses and move on to a different supplier. We weren't in dire straits by any means but the clock was ticking. It made the most economic sense and in terms of project management made sense to start over with somebody new.

After DipJar made the switch, Fraser spent a week or two working with Protolabs’ automated quoting system and customer service engineers on design iterations. After uploading design files, he received a response in less than a day, he says, with interactive 3D models of his parts that highlighted areas to improve the moldability of his designs. Once he was satisfied, he submitted a purchase order and the tooling and parts were done in less than 15 days. “To get tools made anywhere that quickly is astonishing, really,” Fraser says.

DipJar used ABS plastic for those parts because of its strength and the smooth finish available, Fraser explains. While a tip amount was printed directly on the cast urethane cap, the ABS cap is thin enough to allow the dollar amount to shine through from an LED matrix just underneath, Fraser says. That enables the owner to change the dollar amount remotely by computer or smart phone. The DipJar logo (or custom image) can be printed on the faceplate.

“ABS is exceptional when you're building any sort of customer-facing product like this,” says Fraser. “It's very robust. It’s not going to crack or buckle under any sort of heat or humidity. We can print on it so we can have custom graphics on the front that will stay put and won't scratch off. If you dip your credit card in there a million times, it's going to last and it's not going to wear out.”

With 350 of the 500-unit DipJar run sold in advance, the company is hoping for a rush of orders and planning a larger production run at Protolabs this fall, Fraser says. At the same time, work on a third-generation DipJar will continue.

The company wants to continue to keep as much of its manufacturing as possible in the United States. “We're a startup and we want to make parts as fast as possible and cost effectively," Fraser says. "But we also want to do as much as we can in the United States as well, so it's nice to have a company that manufacturers in Minnesota. Protolabs seems to be quite competitive in terms of prices and turnaround.”