The Evolution of Urban Biking

San Francisco is an ideal backdrop for a bike culture to thrive. Its temperatures remain consistently mild year-round, and its landscape seamlessly blends hills, streets and shoreline. Bicyclists commute to work, run errands, transport groceries (and their kids), and climb rugged bike paths to Bay Area overlooks. And that’s just a Monday.

This fusion of task- and recreationally-minded biking activities amidst the natural and man-made architecture of San Francisco was the inspiration behind Huge Design’s recent entry into Oregon Manifest’s Bike Design Project. Along with the California-based design firm, organizers of the national competition asked teams from Chicago, Portland, Seattle, and New York to create an urban bike that most represented their city. Teams included both a design firm and frame builder—the San Francisco team being composed of Huge Design, bicycle fabricator Forty One Thirty Cycle Works and engineering partner PCH Lime Lab.

“The project merged an old-world, bike-building craft with new technology and a modern design process,” explains Chris Harsacky, founder of Huge Design and lead designer on the team. Together, they began developing an urban utility bike called EVO that would allow riders to very easily attach and detach different components—baskets, racks, pannier bags, a child seat—to the front and rear of the frame depending on their activity. 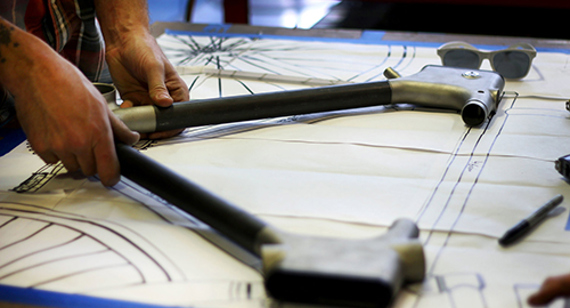 The trio of DMLS bike lugs are connected to chromoly steel tubing before welding occurs. Photo by Gauthier Richard.

“One of the problems with current cargo or utility bikes in the market is that in order to take baskets and seats on and off, you have to bolt and unbolt many of them. Or simply leave them on permanently,” says Harsacky. “With our solution, it’s just as much about being able to quickly rip all of the accessories off and go for a ride, as it is about adding various components.”

To achieve the plug-and-play effect, the team designed a bike frame that combined off-the-shelf 4130 chromoly steel tubing with 17-4 PH stainless steel metal lugs that were integrated into the frame. Due to the complex geometry of the lug design, which included a unique interior mechanism for clipping accessories in and out, engineers at PCH Lime Lab had the lugs build through Protolabs’ additive manufacturing (3D printing) process of direct metal laser sintering (DMLS).

DMLS builds parts in thousands of successive layers, making it ideal for complicated geometries like the bike lugs. A laser system draws onto a surface of atomized metal powder, welding it into a solid. After each layer, a blade adds a fresh coat of powder and repeats the process until the final, fully dense metal lug is formed. “Being in an early prototyping stage, it was much easier to 3D print the complicated lug versus machine it. You get all of the features without having to do any additional design for manufacturability work,” says Harsacky.

Once all of the iterations were complete and the final stainless lugs were built, the team had to weld them to the chromoly tubing to form the bike’s frame. “Instead of having to jig up a frame, and do multiple complex welds where everything intersects, it was really only a few areas where the tubes attach,” describes Harsacky. “Then you’re performing a really easy circular weld that connects the lugs to the tubes. This cuts down a significant amount of production time as well.”

Protolabs also manufactured a bottom bracket shell in DMLS that worked together with the bike’s crankset, and a DMLS fork crown. Harsacky says that the printed crown allowed for more of an organic design that would have been nearly impossible to achieve by welding standard tubes together. 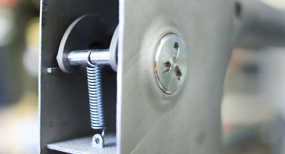 The inside of the DMLS lug contains a complex mechanism that allows for attachments to easily click in and out. Photo by Gauthier Richard

There were other benefits of additive manufacturing. “3D printing allowed us to create the look of a fillet-brazed bike with perfectly blended geometry as well as perpendicular attachment points for the bike tubes, so that we didn't have to do any mitering, explains Tom James, the former PCH Lime Lab engineer who worked on the project. “Mitering is a time-consuming process which both welded and typical lugged tubes are cut at exact angles prior to welding or brazing.”

The final EVO bike easily swaps the utilitarian attachments as needed through the front and rear lugs and interior mechanisms; it supports and balances loads during cycling (a cantilever load of 100 lbs. at 2 ft.); and attachments remains firmly secure to eliminate any rattling that might occur. The bike even features a built-in cable lock, a steering wheel stabilizer for loading and unloading, and a lighting system in the front and rear. “Using 3D printing allowed us to integrate a lot of this complexity into one part, which would otherwise be difficult to manufacture in a robust way,” says Jones. 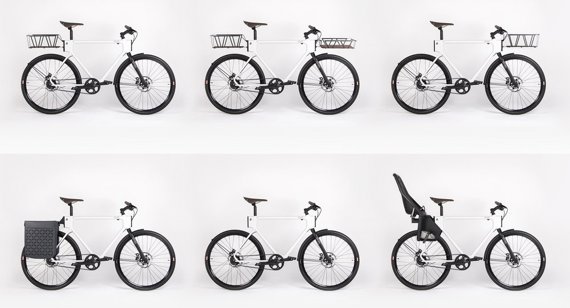 The Bike Design Project began in November 2013 and culminated nearly nine months later in July 2014 with a weeklong open vote online and announcement of the winning city: Seattle. Its team—which included a small design crew from the well-established, 300-person Teague design consultancy and Taylor Sizemore from one-man Seattle shop Sizemore Bicycle—took the prize with a bike they dubbed Denny. The bike drew voters in with its “handlebar lock design, unique fender system, automatic shifting and modern styling,” according Oregon Manifest’s site. The Seattle team was rewarded with a partnership with Fuji Bikes, which will manufacture and sell the Denny in retail locations.

As for Huge Design, the four-year-old, 13-person design firm will continue servicing its range of mostly consumer electronics clients (maybe you’ve heard of Microsoft, Nike or GoPro), but it isn’t finished with EVO quite yet. It’s currently in the process of securing a manufacturing partner to help bring its prototype design into production with a process like sand casting, and officially launch EVO to the bicycle masses.