Connecting to an Ancient Civilization

For the Metropolitan Museum of Art’s exhibition, “Ancient Egypt Transformed: The Middle Kingdom,” on view at the New York museum through Jan. 24, 2016, exhibit planners decided to reconstruct the pyramid complex of King Senwosret III in both a virtual and physical model.

The physical 1:150-scaled model of the site is based on a 3D virtual model that was produced first, and modeled after 3D-printed prototype parts that were created by Protolabs. For perspective, the main pyramid of the original complex was more than 206-ft. high. In the scaled model, it is 1.5 feet. This scale model of the pyramid site is displayed in the exhibition’s galleries alongside the show’s 230 objects. These works of art range in size from monumental stone sculptures to delicate jewelry, assembled from more than 30 international collections, with about a third from the Met itself.

The model is intended to help bring this important Middle Kingdom era to life for visitors to the exhibition, says Ronald Street, the museum’s senior manager of 3D imaging, molding, and prototypes, who has been with the Met for more than three decades. The result of the physical model? “Remarkable,” Street says in a recent museum blog post. “The overall image of the finished model in its two forms—virtual and physical—can be considered a true-to-life reconstruction of the builders’ original vision,” as it was in ancient Egypt, around 1870 B.C.

So, how did Street and his museum colleagues get to that “remarkable” result? More than 20 years ago, the Metropolitan Museum began excavating and studying the site of King Senwosret III in Egypt, located in what is now modern Dahshur, the site of several pyramids, about 25 miles south of Cairo. 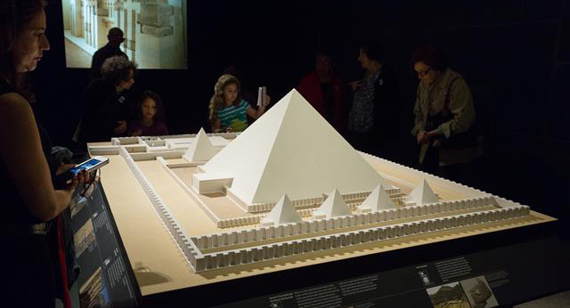 The scale model of the pyramid site is displayed in the MMA galleries as a part of the exhibition “Ancient Egypt Transformed: The Middle Kingdom.”

It should be noted that other excavations and archaeological studies by the museum’s archaeologists have occurred for decades at other Egyptian sites. The Met’s Department of Egyptian Art began in 1906.

In 2014, the museum began planning and developing the concept for an exhibition based on the archaeological evidence from the King Senwosret site, and the idea for the models emerged.

A 3D CAD model was the first step. Computer modeling was developed and refined over the course of a year, according to Street, resulting in the creation of a NURBS-based wire-frame virtual model of the archaeological site in a 1:1 scale. This 3D virtual model provides the opportunity for visualizing the entire, full-scale pyramid complex as it was nearly 4,000 years ago.

A Traditional (and Digital) Solution

Translating the CAD model into a physical, 1:150-scaled model was the next step. This stage would eventually be accomplished through the use of traditional sculpting, modelmaking, mold-making, casting, carpentry, and faux painting. But, before those traditional methods were deployed, and concurrently with those traditional techniques, Street also used more modern and digital methods of fabrication, specifically 3D printing. This additive manufacturing process served as Street’s prototyping phase that helped replicate the unique parts of the model.

As Street observes, the creation of the physical model was an intriguing blend that required him to move “from traditional artist to digital artist, adding modern computer and fabrication techniques on top of traditional techniques.” This process fits well for Street, who began his art career as a ceramicist and studio glass blower, and is also known internationally as one of the first museum practitioners to adopt and incorporate into his work digital techniques such as 3D scanning.

He chose Protolabs’ industrial 3D printing services for several prototype iterations. These prototypes would help bridge the 3D virtual models into the final physical models, which, essentially, are molded-cast epoxy models based on the 3D prototypes. The prototypes themselves, using the additive manufacturing process of stereolithography (SL), were made of an ABS-like thermoplastic.

Street says that as he worked through those several iterations in the prototyping phase, he was especially pleased with Protolabs’ speed—getting parts back in days rather than weeks or longer—and the prototype parts’ level of detail. “It enabled us to get our parts back quickly. It would have been far more difficult to build the piece by hand than it was to model it in the computer and extract the parts I needed.”

“The detail of the 3D-printed part—it would have been very difficult to achieve that type of exacting geometry without the use of 3D printing.”

The level of detail of the prototype parts was especially beneficial, Street says. “The detail of the 3D-printed part—it would have been very difficult to achieve that type of exacting geometry without the use of 3D printing.” Protolabs’ stereolithography (SL) process is especially suited for these types of projects that call for small parts with complex geometries and precise patterns. 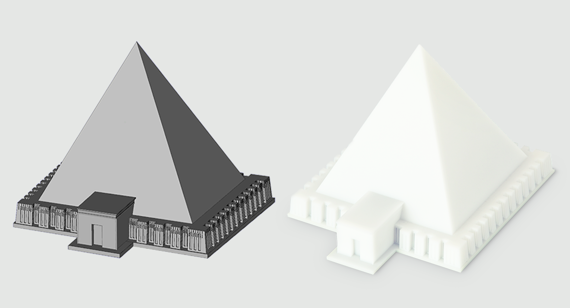 A CAD model of the pyramid was initially created as an .STL file (left), then built in SL out of a white ABS-like thermoplastic material (right).

The virtual and physical models, Street says, provide an important aid “in interpreting and visualizing the evidence which has been known from traditional means of reporting it in 2D drawings and excavation reports.”

Ultimately, the benefit for visitors of viewing the model within “Ancient Egypt Transformed: The Middle Kingdom,” is significant, Street says. “The model especially brings to life the beauty and complexity of this pyramid complex for visitors.”