Less is More for Spring Manufacturer

As products get smaller, their components need to follow suit, and springs are no exception. In a variety of industrial applications, flat-wire wave springs are replacing traditional coil springs. The reason is that a wave spring is half the height of a coil spring yet can often perform the same job—deflect the same amount of weight under the same load—as the coil spring, saving valuable space and, in most cases, weight as well.

Smalley, an Illinois-based wave-spring manufacturer that serves aerospace, automotive, oil and gas, medical, and other industries, offers more than 10,000 standard rings and springs as well as custom designs in diameters ranging from 4mm to 3,000mm (0.165 inches to 120 inches). While the capabilities of wave springs are becoming more widely known, the company has long equipped its sales force with a small demonstration device, a handheld “comparator” that clearly shows the relative size and performance of a wave spring compared with a larger but functionally equivalent coil spring.

“Comparators have been a great way to demonstrate the advantages and benefits of wave springs,” said Lane Persky, Smalley marketing manager. “But they were complicated and costly to manufacture, so we only made a small number of them to distribute to our salespeople.” 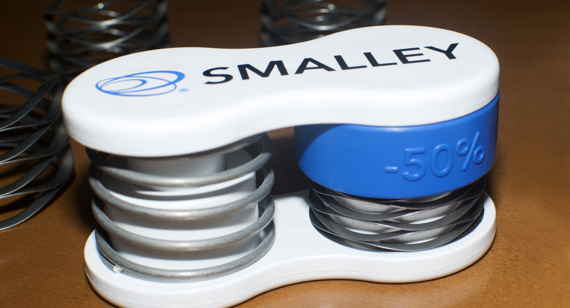 Illinois-based Smalley Steel Ring Company turned to Protolabs for prototyping and low-volume production of this “comparator,” a sales demo device.

Smalley would eventually turn to Protolabs for help with this cost issue when, more recently, the company considered redesigning the comparator to reduce costs and, as Persky explained, “use them as ‘giveaways’ to prospective customers. We were looking to go from about 20 of the original comparators, which each cost about $100 to produce, to an initial run of 1,000 redesigned comparators at a target cost of about $1  each.”

From 23 Parts to Seven

The project to design the new comparator was headed by Senior Research and Development Engineer Ben Moskalik, who noted that the original comparators each consisted of 23 parts, many of them individually machined or purchased. The most costly single part was a linear bearing that allowed smooth compression of the springs. Developers hoped that injection molding would allow multiple parts to be combined and a number of individual fasteners eliminated, simplifying production and significantly reducing costs. The new comparator, as designed, would require just seven parts.

Smalley engineers created initial prototypes on an in-house 3D printer, but while the resulting parts approximated the shape of the designed components, the printing process was slow, the resin was nothing like the material that would be used for molded parts, and it tended to absorb moisture affecting its performance. In addition, the rough surface texture resulting from the layering process caused moving parts to bind instead of sliding smoothly, hampering functionality testing of the new device. Smalley sought out assistance from Protolabs.

"We chose Protolabs for the company’s reputation and ability to do both advanced 3D printing for prototyping and affordable, rapid injection molding.”

“After looking at alternatives, we chose Protolabs for the company’s reputation and ability to do both advanced 3D printing for prototyping and affordable, rapid injection molding when we were ready to go into production,” Persky said.

The same CAD models that had been used to print parts in house were uploaded to ProtoQuote, Protolabs’ online quoting and design for manufacturability (DFM) analysis engine. ProtoQuote flagged potential moldability problems including a couple of features in which walls were too thick for effective molding and would be subject to cosmetic defects like sink. 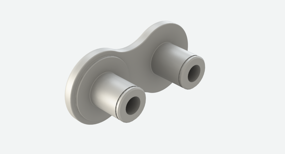 Based on Protolabs’ DFM analysis, a redesigned CAD model with thinner walls was resubmitted. The new CAD models raised no red flags with ProtoQuote and met Smalley’s requirements without the moldability problems. With a few additional iterations by Smalley engineers—some post heights were reduced—the CAD model was uploaded for production of injection molds.

One of the important decisions Smalley had to make was the choice of resin for the molded parts. Protolabs sent resin sample “tiles” to help with choices of feel, finish, and color. With input from Protolabs, the company chose Lustran ABS 433, a general-purpose grade of ABS that has a high impact resistance and glossy appearance. The hard material and glossy finish allowed elimination of the separate linear bearing in the original comparator and reduced friction between moving parts.

The completed comparator requires just seven parts: three molded parts made by Protolabs, a wave spring, two retaining rings made by Smalley, and a purchased coil spring that matches the performance specs of the wave spring, which was chosen for comparison purposes. Smalley ordered 1,000 injection-molded pieces from Protolabs that the company assembled into the new comparators.

“Protolabs lived up to its reputation for fast turnaround and support every step of the way. When we submitted designs to ProtoQuote we got feedback, literally, overnight.”

“Protolabs lived up to its reputation for fast turnaround and support every step of the way,” said Persky. “When we submitted designs to ProtoQuote we got feedback, literally, overnight. The free design analysis let us address moldability issues early in the design process while we were still testing printed versions. We got live help with fine points like selecting the right resins at the right price points, and with that help were able to replace costly linear bearings at a fraction of the price.”

Smalley is delighted with the outcome, Persky said. “We’re looking forward to equipping our sales staff with versions of our comparator that they can actually leave with customers instead of jealously guarding. And when we need more, we know just where to get the parts effectively produced and quickly turned around.”