A Front Seat on Driving Innovation

In today’s cars and trucks, the steering wheel does much more than steer.

Steering column control modules now integrate an expanding variety of functions into the steering wheel, offering drivers a host of functions for both safety and convenience. It communicates airbag deployment signals in the event of a crash, for example, and enables you to change radio stations without taking your hands off the wheel.

Providing connectivity between all of those helpful buttons and switches and the functions they control—from the turn signals and wipers to cruise control and even heating the steering wheel itself—is the job of the clock spring, a plastic disc about the size of a hockey puck that sits hidden under the steering wheel within the steering column control module.

While you may not give much thought to what happens when you press a steering wheel button and the volume of your song goes up, Rick Bowes certainly does. He’s a designer in the body control systems group at Michigan-based TRW Automotive, which was acquired in 2015 by global technology company, ZF Friedrichshafen. 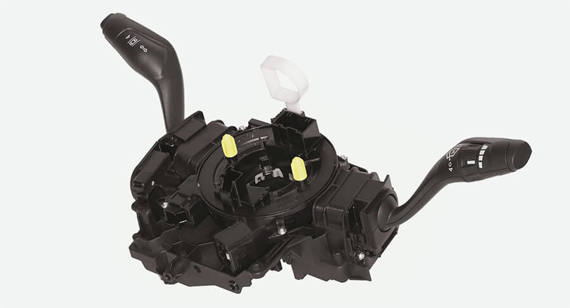 The clock spring is positioned in the center of a typical steering column control module.

“[Automakers] these days want more features packed into smaller packages,” Bowes says. “That’s our challenge, stuffing all that functionality into that little package. You don’t see any wires hanging off your steering column, so they’ve got to go somewhere.”

Bowes’ focus on continuous improvement to the clock spring repeatedly brings him back to Protolabs. In the past five years, Protolabs has made the company hundreds of prototypes of clock spring rotors, housings, and covers, the components that Bowes says comprise the bulk of the structure of the clock spring assembly.

“In general, there’s probably 15 or 20 parts that make up a clock spring assembly,” Bowes says. “If at least half of those need to be prototyped, multiply that times each iteration that we do, and it adds up pretty quick.”

“I was able to effectively utilize prototype parts with the new concept design using the old inner workings,” Bowes says of the part, now in production. “I also had to integrate different thought processes and make it work in line with our current assembly process down at our plant. Obviously, Protolabs came in handy for doing the quick prototypes that served our purposes for evaluation and testing.”

The company uses Protolabs’ for injection-molded thermoplastic clock spring rotors and covers made from acetal and housings made in PBT (polybutylene terephthalate), Bowes says. “This is the most logical way for these kinds of parts,” Bowes says of the injection molding process. “It’s right in the wheelhouse since [the clock spring] is roughly the size of a hockey puck. It’s good for multiple cavity molds.”

Prototyping with injection molding at Protolabs is cost-effective and works well for testing and evaluating a part, especially if an engineer or designer needs to further validate a part design before moving to large-scale steel tooling. Bowes also occasionally relies on Protolabs’ CNC machining capabilities to mill only a portion of a prototype, which lets him see how a subsystem or design element works.

Both Protolabs’ interactive design analysis in its quoting system and the company’s customer support engineers helped with the prototyping process, Bowes says. The system offers feedback on design and pricing information within hours of uploading a 3D CAD model. “It’s very convenient for part submissions,” Bowes says. “The online interface is very flexible in terms of making adjustments during the quoting process.”

Prototyping clock spring assembly parts helps Bowes make sure that design changes won’t damage the thin, flexible flat cables (FFCs) inside the clock spring. The FFCs provide the wired connection that carries signals from steering wheel buttons and switches through the clock spring, down the steering column, and onto the circuits that control specific functions. 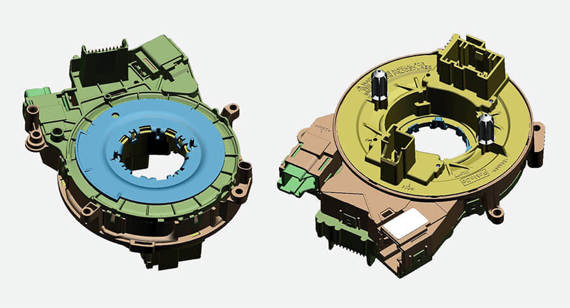 The renderings show top and bottom views of the intricate clock spring assembly.

In early designs, the FFCs were wrapped in one direction, resembling the spiral mainspring of a mechanical clock and giving the part its name. A clock spring usually has anywhere from two to four of these FFCs, but sometimes there may be more depending on OEM requirements.

“That’s one of the things we focus on during design, to make sure it doesn't get damaged,” Bowes says of the thin cables. “You also have to look at the current, to be able to carry the signal through properly. Especially for the air bag; it has to work 100 percent of the time because it’s part of the integrated safety system.”

Bowes and others now are working on the next-generation clock spring. TRW Automotive, which traces its roots to 1904, reported 2014 sales of $17.5 billion. The company, through its subsidiaries, operated in 24 countries and has 65,000 employees before the ZF acquisition.