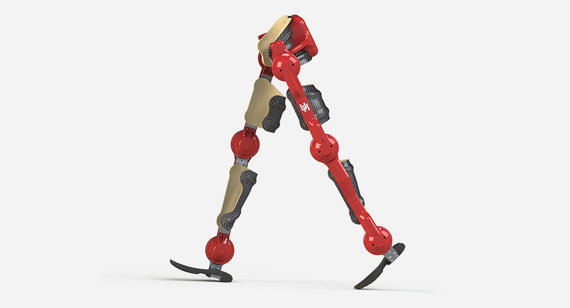 Protolabs is providing custom-machined aluminum-joint housings for this powered exoskeleton, which will be part of a futuristic brain-machine robotics system that would help paraplegics walk again.

A University of Houston research lab is developing a powered exoskeleton—with help from Protolabs, which is providing custom-machined aluminum joint housings—that will be part of a futuristic brain-machine robotics system.

It is a fast-track effort to bring the exoskeleton—amped-up versions of which have appeared in such films as “Aliens” and “Avatar”—from science fiction to real-world use, which would help paraplegics to walk again.

A multidisciplinary research team that includes engineers, neuroscientists, health professionals, and students is working to create, from scratch, a powered wearable robotic device that allows those with lower-limb paralysis from spinal injury, disease, or stroke to regain mobility without a walker or canes.

A sci-fi element lives on in the project, which is taking place at the university's Laboratory for Noninvasive Brain-Machine Interface Systems. As the lab’s futuristic name suggests, the ultimate goal is to allow users to control the exoskeleton—commanding it to go forward or backward, to turn, sit, or stand—using their thoughts instead of a joystick, switches, or external operator typical of other devices. 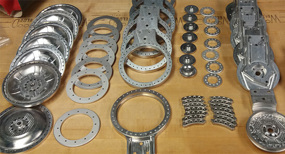 The only thing more fantastic might be the extremely ambitious deadline that Jose Contreras-Vidal, the lab’s director and Cullen professor of electrical and computer engineering, set for the project. While the lab has extensive experience in brain-machine interfaces, developing a powered exoskeleton robot represented its first venture into developing its own hardware.

Yet the plan is to have a working model ready for a user, known as a pilot, to take part in the powered exoskeleton race at Cybathlon, an international competition in Zurich in October. The event features physically impaired people using the latest assistive technologies, in many cases going up against commercial systems from companies with years of experience and regulatory approval. That means having a working model ready less than 10 months after Contreras-Vidal and students began brainstorming about exoskeletons in a class in the fall of 2015. By comparison, a lower-limb exoskeleton that recently received U.S. Food and Drug Administration approval was the result of an intensive 10-year development effort.

Research focuses on developing devices that “listen to the brain, extract intent, and use those signals to control wearable robots.”

Research at the brain-machine interface lab focuses on developing devices that “listen to the brain, extract intent, and use those signals to control wearable robots,” Contreras-Vidal said. In tests, the lab has used brain-machine interfaces to control upper-limb exoskeletons, upper-limb prosthetics with actuated fingers, and lower-limb exoskeletons. The “listening” occurs through an electroencephalogram (EEG) cap, worn over the user’s head, that uses an array of electrodes to detect electrical activity in the brain. 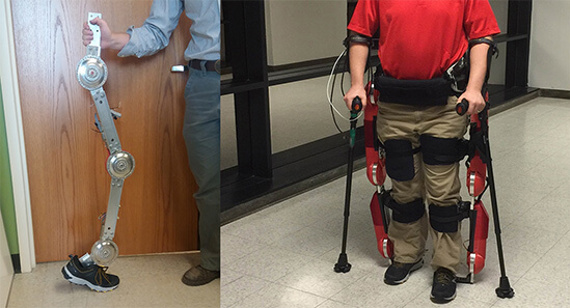 Researchers at the University of Houston demonstrate how the robotics system works.

The brain-machine interface measures the user’s brain waves as he or she carries out a series of motions with the exoskeleton. The system uses advanced algorithms to map the user’s brain waves for each motion. The brain-machine interface learns to interpret the brain signals associated with those motions to understand when the user wants to walk and when he or she wants to stop. The user also requires training to go into those states of mind so the system can interpret them correctly. The lab is using a variety of machine learning approaches to train the machine, making it a pioneer in applying that technique to controlling lower-limb exoskeletons.

“We were probably the first group to demonstrate a noninvasive brain-machine interface to an exoskeleton in a person with paralysis,” Contreras-Vidal said. “We have been since trying to push the envelope to better understand the intent of our participants. We can drive the machines to do what we want.” 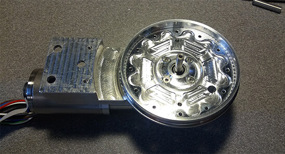 Efforts to continue refining the brain-machine interface, however, encountered a roadblock when most makers of commercial lower-limb exoskeletons declined to open up their systems to let the machine interface run their devices. One company, New Zealand-based Rex Bionics, has allowed the lab to use its brain-machine interface to control high-level functions of one of its exoskeletons, to direct it to turn or stop or start. Contreras-Vidal, though, wanted access to low-level controls to specify how the robot can move, step-by-step, to give it a more natural, even individually recognizable human gait. That’s when he decided to get into the hardware business, setting out to have the lab develop its own exoskeleton as an open platform on which to test and develop control architectures including its “bleeding edge” brain-machine interface technology.

The lab team conceived a wearable robot with six actuated joints, one at each ankle, knee, and hip, serving as what Contreras-Vidal termed “the muscles of the exoskeleton.” Covering those mechanical muscles are aluminum housings custom-machined at Protolabs. While designing, building, and making adjustments to the device under the lab’s tight, self-imposed deadline, getting parts quickly has been critical, according to Jeffrey Gorges, lead research technician. Uploading CAD drawings to Protolabs’ online design analysis and quoting system helped the process get off to a fast start.

“If you were to take the same components to a job shop, they might say, ‘OK, in four to six weeks we’ll get back to you,’” Gorges said. “With a three-day turnaround with Protolabs, that gives us a whole extra two months to work with. That’s huge because we can’t test our controls unless we have the hardware in hand. Every day we have in hand is a better day to improve the system.”

The lab used its own 3D printer to create “version 0.1” of the housing to evaluate the assembly, assembly processes, and how components would stack inside, Gorges said. The lab is using 3D printing to produce carbon-fiber braces for the exoskeleton and casings for electronics. The Baylor College of Medicine in Houston, which has an orthotics and prosthetics program, is making the braces.

Loading tests weren’t possible with a 3D-printed housing, however, so the lab had Protolabs make a small single joint to test. A second version of the housing from Protolabs is now in use with design improvements likely to lead to further iterations. For load-bearing joint components, the lab is using aircraft-grade aluminum 7075 for its light weight and rigidity, Gorges said. The material also offers high tensile strength and corrosion resistance. “The big thing is minimizing size and weight for the exoskeleton but also having reasonable cost,” Gorges said.

At the lab’s request, Protolabs agreed to sponsor a portion of the cost of the parts it has made. “We were surprised by the rapid turnaround and the interest in the project from Protolabs,” Contreras-Vidal said. “We really appreciated that.”

All of the parts, including the aluminum housings, have worked well in initial testing, Gorges said.

“Those parts are critical points in the system,” Contreras-Vidal explained. “The housing is not only the location for the actuators and the gear reduction but it interfaces with other parts of the system. We've done a lot of bench tests, we have had this joint going many, many times. They have been doing fine.”

Contreras-Vidal has filed provision patent paperwork for the brain-machine interface and the exoskeleton. He will seek approval from the FDA, which regulates exoskeletons as Class II devices, once the lab finalizes a prototype. Meanwhile, development of the exoskeleton and training of the brain-machine interface and a pilot will continue as the Cybathlon competition approaches. He also is looking ahead to the eventual commercialization of the system. The market for devices that help paraplegics walk could top $1 billion in 10 years, an industry executive has said.

Enabling people with lower-limb paralysis to walk again is an endeavor with a “high social impact,” Contreras-Vidal said. The United States has an estimated 6 million people with paralysis, he said. Lifetime care for a 25-year-old who becomes paraplegic because of a spinal cord injury is estimated to cost $3 million excluding lost wages. Paraplegia also can lead to secondary health problems such as bladder malfunction.