Each year, about 4 million people will suffer a sports- or recreation-related concussion. Many of them won’t even know that this potentially life-threatening brain injury has happened. Without early detection, concussions can lead to long-term brain damage.

Tozuda, a device made by the Philadelphia-based company of the same name, wanted to fix that. They looked at the marketplace and saw it filled with competitors using high-tech solutions such as $200 “smart” mouth guards. For most athletic programs, that price was way out of reach for a device that simply makes athletes and coaches aware that a player encountered a particular level of force. 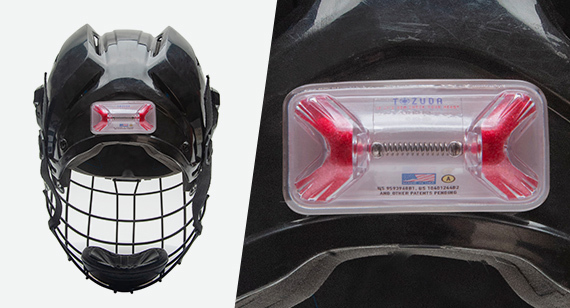 Tozuda, is a cost-effective product that can help athletes and coaches detect concussions early on and reduce the risk of long-term brain damage.

In 2009, Jessie Garcia was playing rugby for the Lehigh University team when she was blindsided by another player. Afterward, she felt woozy but continued to play and ignored the symptoms for several days. Later, her coach reviewed footage of the game and suggested to Garcia that she might have a concussion. It turns out she did have a concussion, but memories of that injury spurred the idea behind Tozuda, the company she founded in 2014 and pursued full-time in 2016.

If It’s Red, Check Your Head

Garcia and her team wanted to avoid costly smart devices that often require proprietary smartphone apps to read and interpret the data. “It was important to us that Tozuda be affordable,” said Garcia, CEO. “Young athletes and professionals in dangerous work situations deserve to know if their head injuries require a physician’s attention.”

Tozuda’s solution is mechanical, using a compressed spring and ball bearings that keep dye tucked away in reservoirs on either side of the device. When an impact of sufficient force happens, the spring and bearings dislodge and dye spills into a chamber, causing the device to turn red. When the color changes, it indicates the possibility that a concussion has occurred and the user should be evaluated for potential traumatic brain injury (TBI). Only a licensed medical professional can diagnose a concussion.

Tozuda’s sensor is a first-step indicator of damaging impact. Even though concussions are considered traumatic brain injuries, some people may not experience any symptoms at all. Tozuda provides an early warning that the individual should seek medical attention to avoid secondary impacts that could worsen the injury.

“Our Protolabs contacts kept us informed with calls and emails clarifying what their engineering teams needed to ensure that we would get the exact parts we were looking for. This made our team feel very confident in the order.” 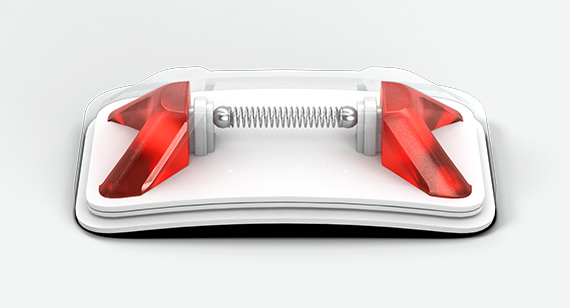 After manufacturing prototypes with 3D printing and CNC machining, Tozuda's final production parts were injection-molded from a variety of materials.

Protolabs manufactured the parts that make up the device’s frame. During the prototyping phase, Garcia and her team used 3D printing and CNC machining, but injection molding turned out to be the most cost-effective way to mass produce the parts they needed and still achieve scale in a timely manner.

Protolabs manufactured three parts for Tozuda. The cover is made from transparent polycarbonate plastic that makes the detection system clearly visible. The base, where the device attaches to a helmet is rugged ABS plastic. Between the two are critical internal components made from flexible liquid silicone rubber (LSR). These hold the spring and ball bearings in place, and keep the dye tucked away in reservoirs on either side unless jarred with a force that is sufficient to potentially cause a concussion. Tozuda’s catchphrase, “If it’s red, check your head,” is a nod to the simple system built into the device to detect linear and rotational force. It also reminds users that only a medical professional can diagnose a concussion.

For the Tozuda team, what mattered most was quality and speed. “We love how fast Protolabs turned around our quotes and parts!” said Garcia. “Once we submitted part files online, our Protolabs contacts kept us informed with calls and emails clarifying what their engineering teams needed so we knew we would get the exact parts we were looking for.”

The latest iteration of Tozuda hits the market later in 2020. The company is accepting orders for the device through its online store. Pricing varies based on order quantity.