Just a little over a year ago, the future of Concept Laser looked quite different than it does now. Based in Lichtenfels, Germany, the company had been founded in 2000 by Frank Herzog and his wife, Kerstin Herzog. The Herzogs’ company focused on industrial-grade 3D printing (additive manufacturing) for metals, and had gained a growing list of aerospace, medical, and other customers, including Protolabs, which runs a number of Concept Laser machines.

Then in October 2016, GE announced that it was acquiring a 75-percent stake in Concept Laser, with full ownership to come later. The deal put the Herzogs’ company on a whole new growth trajectory. Now, the story of Concept Laser is also the story of GE’s investment and the potential GE sees in additive technologies. 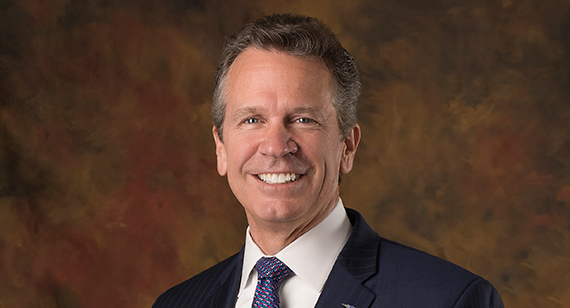 John Murray is CEO of the U.S. subsidiary of Concept Laser, Inc., the German-based industrial-grade 3D printing company, which was purchased in 2016 by GE.

John Murray, CEO of Concept Laser, Inc., the U.S. subsidiary based in Grapevine, Texas, remembers the middle-of-the-night phone call he got from an ecstatic Frank Herzog when Herzog signed the GE deal: “He said, ‘I know I have 200 additive manufacturing engineers in Munich alone that I just inherited.’” That had been about the size of Concept Laser’s whole payroll going into the deal. In a recent interview with Protolabs, Murray said he’s also happy about the wealth of talent that came with GE’s investment.

“I think we have 1,000 Ph.D. material scientists we can tap into,” Murray said. “We solve problems in a couple days that might have taken us many months to solve previously.”

Concept Laser also brought capabilities to the relationship that GE wanted, especially as GE Aviation worked toward production of new designs for engine parts. In one project—a skunkworks initiative that began in secret a few years ago because no one was sure it would yield anything—GE engineers designed a partially 3D-printed advanced turboprop engine, consolidating 855 individual parts into 12 printed components and reducing the engine’s weight and fuel requirements in the process. Textron Aviation’s Cessna Denali will be the first aircraft to use the engine. The plane’s scheduled release is in the fourth quarter of 2018.

“I think we have 1,000 Ph.D. material scientists we can tap into,” Murray said. “We solve problems in a couple days that might have taken us many months to solve previously.” 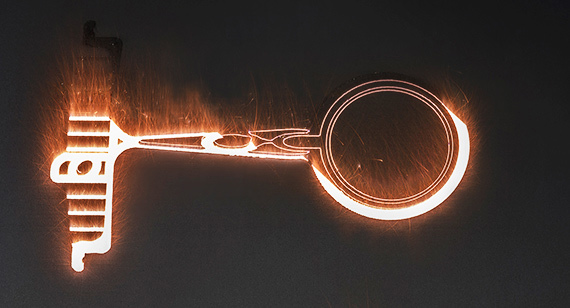 ATLAS printers, which Concept Laser introduced at the Formnext conference in Frankfurt in November, will be a key to printing large components for aviation and other industries. ATLAS stands for Additive Technology Large Area System. The machine’s build chamber is a cubic meter and can scale larger, Murray said.

In 2016, then-GE CEO Jeff Immelt told shareholders, “We plan to build a business with $1 billion of revenue in additive equipment and services by 2020, from $300 million today.” Since then, GE, which is now headed by John Flannery, has been rolling up acquisitions in additive manufacturing: Concept Laser and Sweden’s Arcam, which is also a maker of 3D printers for metal, both at the end of 2016; Belgium-based GeonX, a developer of simulation software, in November 2017. That same month, Concept Laser broke ground for a big new campus in Lichtenfels. The company’s only other manufacturing site for now is in Cincinnati, which handles just a small slice of production.

Murray had more to say about growth for Concept Laser, GE Additive, and the additive manufacturing industry. Here are excerpts from our interview.

‘Lasercusing’ is your company’s core technology. What differentiates it from other metal-based additive processes?

Frank Herzog was way ahead of the game with the melt-pool monitoring technology he developed 10 years ago. We actually look coaxially through the laser beam, we’re not using sensors that are off axis or in the build chamber. We’re looking directly through the laser, and the signal we bring back up through that path goes into a photodiode and a CMOS camera. The CMOS camera is measuring the shape and size of the melt pool and the photodiode is measuring the intensity of the melt pool.

Those two signals create a map, literally a three-dimensional map, during the build process. When you’re done, it looks pretty much like a CT scan of the part. With that data, you can tell if you have any voids or if anything happened during the build that wasn’t as you anticipated. And you can compare one build to the next, so every part is built identically. 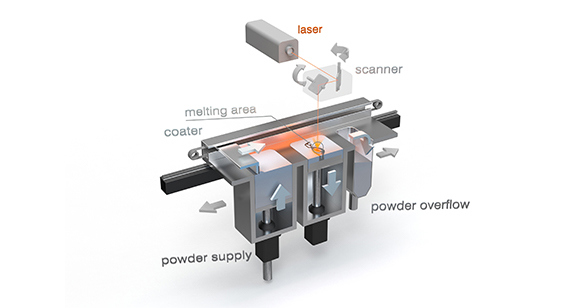 This diagram shows how Concept Laser’s lasercusing process works, which is the company’s core technology.

Artificial intelligence is the next generation of that technology, which is something that GE is bringing to the table. The machines need to be constantly learning and improving so that if you have a Federal Aviation Administration or Food and Drug Administration certified part that you’re building, it’s consistent every single time.

Additive manufacturing is already growing rapidly. What do you see as most important for sustaining growth in the next five years?

I think the biggest driver is going to be the minds of engineers, the education of engineers so that they design for the additive process. If companies don’t get that down, they’re never really going to exploit the power of the technology. [Along these lines, Concept Laser now is a partner with Arizona State University, supporting ASU’s new Academic Additive Manufacturing Center].

Early on, one of GE’s brightest engineers, a jet engine engineer, was moved to the additive group and they said he sat there for three or four months, just like ‘What am I doing here? This is a complete waste of time.’ But he was out running one Saturday and it was like the lightbulbs went on in his head. He came up with seven patents in one day. So here’s a guy who’s like the brightest and best and it still took him three or four months of being immersed in additive to really understand what he could do with the technology.

In that vein, you’ve mentioned the GE AddWorks team as one of the most valuable things your company gained through the GE deal.

Yes, we have over 100 engineers in our AddWorks group and they’re experts in computational fluid dynamics, thermal management, materials science, you name it. They have tremendous depth and are the best in the world at additive. And they can go into customers and train them for everything from a couple-day engagement to a six-month engagement that can be as deep as the customer wants to go. You kind of have to jump start customers because typically people are so busy with their jobs that they don’t have time to learn something new.

The M2 is one of several models that Concept Laser manufactures and sells that provide industrial-grade 3D printing (additive manufacturing) technology for metals. Proto Labs uses a number of Concept Laser machines at its North Carolina facility.

So engineering talent is a key to sustaining growth in the near term. Anything else you’d single out?

The other big driver is making machines faster and more efficient. You know, we’re not going to replace every process, but we’re going to keep encroaching more and more on manufacturing and that can only be done through automation.

We have a product that’s deep in development that’s going to put a ton of automation around the whole process. The machines currently require someone to go up and interact with them to start them. When a machine is finished, an operator has to go up and address it again and unpack the part and remove it. That’s all going to be automated, autonomous vehicles and robots.

You’ve talked about additive technologies being revolutionary beyond the manufacturing process itself. What do you mean?

In the end, additive manufacturing is a logistics play. It allows manufacturers to manufacture on a just-in-time basis anywhere in the world anytime they need to. And that’s going to change the world.

Ultimately, additive, with its capabilities to change how products are designed and made, is going to change a lot of environments. It will be fascinating to watch.