Digging Under the Feathers of BattleBot DUCK!

It’s that time of year again, time for the BattleBots to go at it to see who is the fiercest in the BattleBox. For the third time, Protolabs is powering DUCK!, the 250-pound, low-riding, and somewhat adorable competitor from Team Black and Blue. A crafty veteran of the arena, DUCK! uses a combination of brains and sensible defensive strategies to outlast the competition. After all, it comes down to being the last bot rolling, even if you’ve been mercilessly damaged in unpleasant ways. 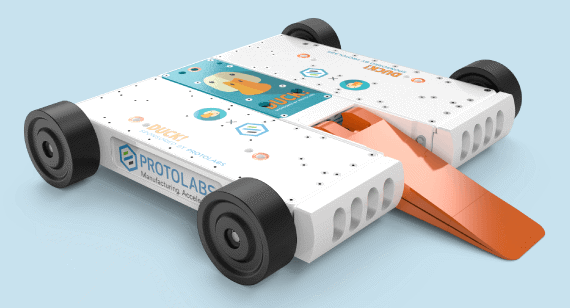 DUCK! took the 2020 season off due to the pandemic but he’s back and ready to compete, taking on all comers with his classic lean profile. Other than the ability to ram an opponent, DUCK!’s only offensive weapon is his protruding orange beak, called a lifter, which can scoot under another bot and fling it into the air.

In one of his last battles (back in 2019), DUCK! survived an unscheduled facelift at the hands of Team Cobalt. He was thrown around the floor repeatedly, had his lifter mechanism/beak not-so-surgically removed, and yet still won. “DUCK! is a little bit unique in that it's a defensive robot, said Hal Rucker, Team Black and Blue lead in an interview on our Digital Thread podcast. “It doesn't have a big, scary weapon like most of the other robots have. DUCK! is designed to take a punch and keep going…some people refer to it as a break your fist on my face strategy.”

Rucker, and his teammate and daughter, Hannah, will handle the controls as DUCK! takes on what Rucker says are some of the biggest and most offensive bots ever in the competition.

Every year in which he competes, DUCK! gets a bit of a new look, but also gets some upgrades to his exterior frame and insides. While DUCK! 1.0 was designed, built, and tested in 28 days, Rucker had a wealth of time for this season—a few years! Solid magnesium became the metal of choice for DUCK! 3.0’s chassis. The chassis cover, however, can be swapped out to meet weight regulations, using either polycarbonate, or even titanium. Also, for the first time, DUCK! used 3D-printed metal parts. 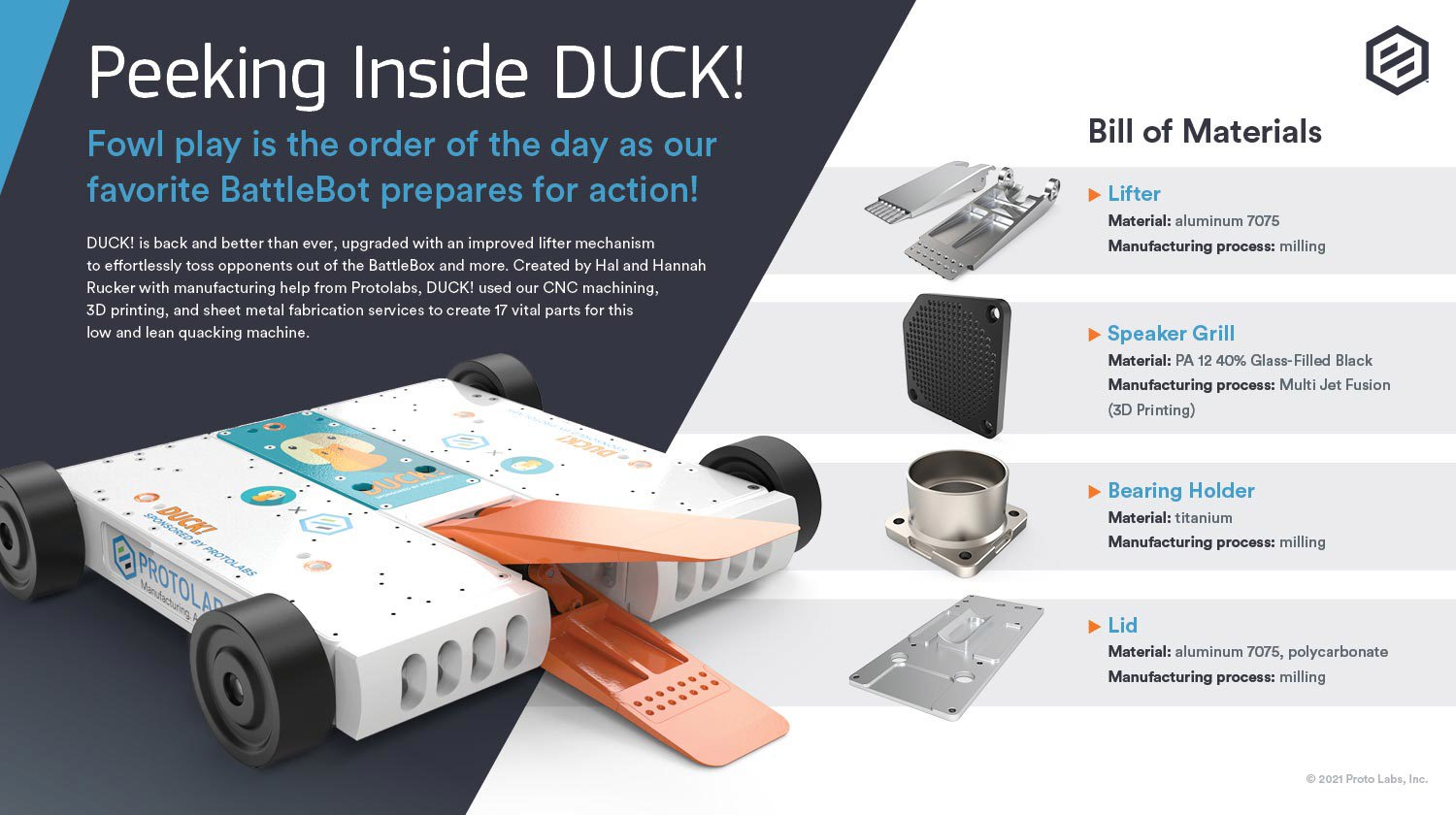 What can we look forward to with DUCK! this year? For one, he’ll be powered by more powerful brushless motors. They provide a lot of oomph, but it’s difficult to program a controller that allows for fine shifts in speed and forward/reverse direction.

Rucker tells us that this DUCK! iteration features multiple attachments that bolt onto the front and back of the chassis. This gives the bot a variety of extra armor pieces, or different types of forks.

On the offensive side, DUCK! has a stronger lifter mechanism (its beak) that works a lot like a regular duck’s bill. Most of those parts were built by us. Picking up and heaving a 250-pound bot that’s either spinning or trying to eviscerate you with a saw isn’t easy to do, but DUCK!, who sometimes seems to border on the masochistic, makes the attempt incredibly entertaining.

But sometimes it’s the small improvements that help DUCK! win fans’ hearts. With DUCK! 3.0, when the lifter mechanism opens and closes, he lets out a mighty quack. Rucker said, “We call it fowl language.”