The town of Bamberg, Bavaria is known for its game-changing brewing, like the legend of smoke beer, created by accident when a fire in the brewery billowed smoke into the brewer's malt storage. Unable to afford to dispose of the malt, the frugal brewer crafted an unusual brew that became unexpectedly popular and is still brewed today. The town’s latest brewing innovation comes from the unlikely partnership of GE Additive and the Kaspar Schulz Brewery.

Jörg Binkert, leader of research and development at the brewery, says introducing a 3D-printed part to the lautering stage has cut hours off the process. During lautering, water filters through the grain in a giant stainless steel vessel, pulling the sugar from the malt. The lauter tun acts as a strainer, collecting the wort for brewing and separating grain for disposal. This is one of the first stages in the brewing process, before fermentation.

Next comes sparging, when the brewer sprinkles hot water over the grain to help sap more sugar from the malt. Understanding the lautering and sparging processes is important to appreciate the impact of the new 3D-printed part. Just as brewing tea can be accelerated by squeezing the tea bag or swirling the leaves, brewers at Kaspar Schulz were looking for a similar technique to accelerate these early stages in brewing. 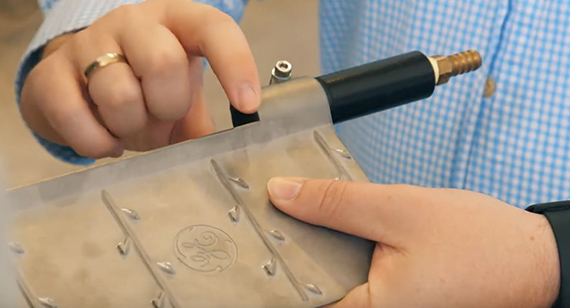 They targeted the blades on the raking arms that churn up the heavy grain, trying to come up with a way to potentially use them throughout the sparging process as well and to accelerate both brewing phases. This is where GE engineers stepped in, designing a new blade to do double duty as a sprinkler in addition to a plow. This new blade has internal channels running down the sides, allowing it to inject water into the malty sludge as it churns.

Returning to the tea analogy, picture several tiny teaspoons that shoot jets of boiling water into the leaves while stirring. GE Additive engineers used their knowledge in the aerospace industry to design the blade, comparing the way it works to turbulent flow with channels pumping water into the grain while slicing through it. The new blades cut the lautering and sparging time in half, reducing the processing time from two hours to less than one.

Beaumont leveraged GE's M2 Concept Laser to create the blades in a build that takes 24 hours to create a single blade from a pile of metal powder. Lasers melt the powder to form parts that rise up, creating the build. The partnership with GE combines some of the most modern technology available today with a 300-year-old process. Kaspar Schulz is the oldest brewing equipment manufacturer in the world, supplying copper kettles for brewing since 1677.

"We think we’re just at the beginning in terms of ideas," said Binkert, looking to move into the industry's next frontier—continuous brewing. "We have tried, but we haven’t got the right machinery right now, but perhaps in three to four years?"