MLB Teams up with AR Technology to Enhance the Ballpark Experience 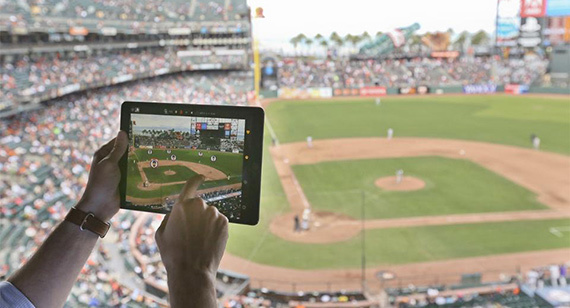 Major League Baseball returns this week, and with it comes a new way to experience the game. Last fall, MLB announced an augmented reality (AR) addition to its popular At Bat app to launch during the 2018 season. The AR feature will allow fans to point their iPhone or iPad at the field during a game and view overlay of 3D graphics displayed on top of the live view.

The app will show statistics and information next to each player on the screen including errors, fielding percentage, catch probability, Earned Runs In, and home run statistics. However, the creators aim to enhance the game by providing information beyond basic stats that could be found online.

When a player hits a ball, the screen will show a trail tracing its trajectory with exit velocity, launch angle, distance, and apex information. Users will also be able to see graphics showing how big of a lead a runner is taking off the base, the runner’s speed, pitcher’s quickness of delivery, and catcher’s arm strength and throw speed to analyze situations where the runner would be most successful in stealing a base.

As of now, the AR software is still in the prototyping stage using Apple’s ARKit augmented reality platform, but will soon be available in all 30 ballparks. Tweaks that still need to be worked out include adjusting the display for different screen sizes and addressing integration issues with replay since the app is designed to run on real time.