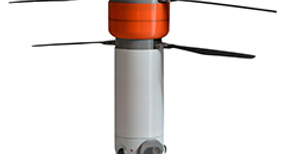 The Sprite drone, developed by Ascent AeroSystems, is an ultra-portable drone that collapses down to the size of a water bottle and uses a coaxial rotor design—two rotors stacked one atop the other. It was originally conceived as a backpacking aerial scout, but the modular design approach makes it suitable for a wide-range of drone applications.

Sprite’s compact design can easily fit in a backpack and is more portable than a traditional quadcopter which often requires a separate case. The collapsible design and foldable blades also add durability by shielding electronics from water and damage.

It supports many commercially available cameras as well as landing gear, a high-intensity LED light band, a device that aids in obstacle avoidance, and more. AeroSystems has also made design guidelines available to assist users that wish to design their own Sprite-compatible payload.

Sprite developers made the initial prototypes with a consumer-grade 3D printer using PLA and ABS-like plastics. With the The Cool Idea Award grant, they were able to mold parts for several iterations of prototypes.

“The injection-molded polycarbonate parts from Protolabs represent production-grade quality that’s added a dramatic improvement in everything from flight performance to assembly and maintainability." 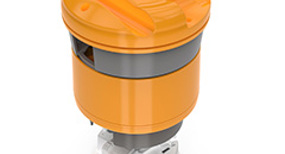 Jonathan Meringer, co-founder of Ascent AeroSystems, said “The injection-molded polycarbonate parts from Protolabs represent production-grade quality that’s added a dramatic improvement in everything from flight performance to assembly and maintainability. We were able to build several conforming vehicles that are really close to what the final product will be.” 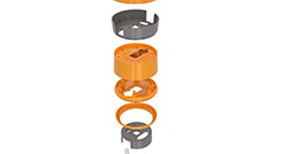 For now, Ascent Aerosystems, is focusing on getting Sprite into the hands of outdoor enthusiasts like hikers, backpackers, and wilderness adventurers, but the company has also received attention from businesses interested in more commercial applications like public safety, security, and scientific research. With the team preparing for launch, the injection-molded prototypes will be valuable tools as they make their final design decisions.