The aerospace industry has been one of the earliest adopters of metal 3D printing. The ability to create complex, metal components has opened up a realm of possibilities for product designers and engineers tasked with finding innovative approaches to reduce weight, add strength, or simplify multipart assemblies. 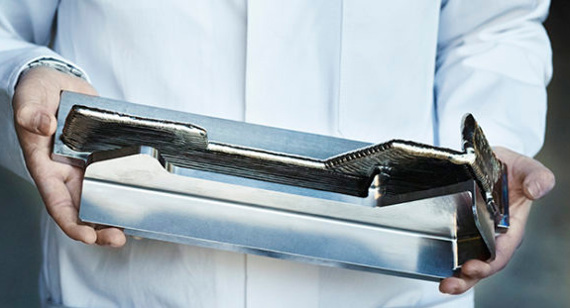 The Boeing 787 Dreamliner will be the first FAA-approved structural components to hit the skies. Source: Norsk Titanium

3D printing’s first notable foray into aerospace production was GE’s jet fuel nozzle. In fact, it was the first GE 3D-printed part certified by the U.S Federal Aviation Administration (FAA). The metal component is a housing for a sensor found inside a jet engine.

Additive manufacturing provided two primary benefits during development and production. First, the nozzle was previously comprised of 18 separate parts. With 3D printing, GE was able to reduce the 18 component assembly into a single part. With 19 fuel nozzles in each jet engine, this reduces assembly costs and streamlines the manufacturing process.

3D printing also enabled the product developers to build and test new designs and iterate more quickly and effectively. Once the design is finalized, taking the part into production is simply a matter of sharing a file.

But industrial 3D printing is not limited to small engine components. Boeing recently announced that their new 787 Dreamliner will include structural 3D-printed parts. This will be the first time 3D printing is used to build an aircraft’s structural components. The company partnered with  a Norway-based manufacturing company to develop the titanium parts.

Like most metal parts, they were previously manufactured via conventional methods such as forging and machining. Titanium is essential to the new Dreamliner design. It accounts for roughly $17 million of the $265 million in costs for the Dreamliner. Boeing reports the 3D-printed titanium components will reduce costs by roughly $2 to $3 million per Dreamliner. In typical year the company produces 144 Dreamliners, so reducing the cost of titanium parts will have a major impact.

Designing and manufacturing the parts is just half the battle, though. The two companies had to work closely over the course of year to ensure the material and 3D printing tech would receive FAA approval. By gaining approval for both the materials and the manufacturing process, Boeing and Tusk will not need to gain approval for parts on an individual basis. Boeing expects to gain FAA application later this year.