A guitar pick is a simple design, right? It’s just a flat piece of flexible plastic, after all.

Well, Paul Holcomb, founder of Bog Street LLC and designer of the LEAP series of guitar picks, begs to differ. He has reimagined the guitar pick with an all-in-one design with variable thicknesses and a more ergonomic grip.

We spoke with Paul to learn more about how he developed this new design and the challenges he overcame taking the concept from initial prototype to molded production parts. 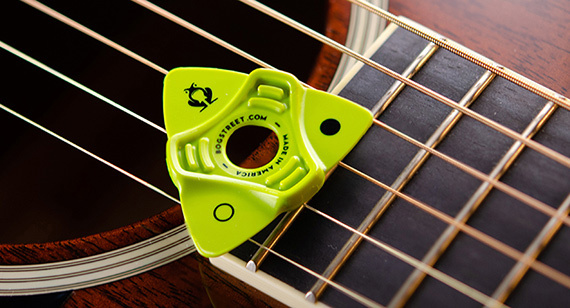 Paul Holcomb says he went through hundreds of prototypes and nearly a dozen iterations before landing on a final design that was ready for production.

Were there any major roadblocks you overcame when designing the LEAP guitar pick?

Playing guitar takes a lot of finesse and technique, so the biggest challenge was to keep iterating on prototypes until we landed on a design that tested well with the most testing participants. We literally went through hundreds of prototypes and a dozen iterations of the design. Another major challenge was finding a material that emulated the nuanced properties of a delicate part (guitar pick) without being too stiff, flexible, or breaking.

How many prototype versions did it take before you felt ready for production?

There were roughly three major versions of the prototype design with countless minor variations to fine tune the feel of the grip and maximize the playability of the part.

Did Protolabs’ automated design analysis or applications engineers help with the move to low-volume production?

Absolutely.  We hit several challenges with manufacturing along the way.  Our service rep, Kristal Lange, was awesome—I feel like she became an extension of the company.  She would pull in an engineer when we needed to solve a problem.

What would you say led you to choosing Protolabs for manufacturing?

I chose Protolabs because it could support the project from the early concept stage all the way through manufacturing.  We started with 3D-printed prototypes and by the time we were ready to commit to molding it felt like a natural transition. We also needed to CNC a part out of Delrin and nylon to get a feel for how the final manufactured part might perform. We chose Protolabs because they will be able to scale with the business. 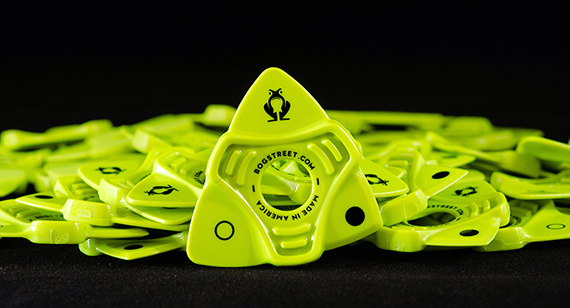 With on-demand manufacturing, Holcomb has been able to manufacture thousands of guitar picks for retail.

What's the best material for a guitar pick?

I primarily used nylon but also tested Delrin.  These are common materials for guitar picks.  Finding the right resin and colorant has been a challenge. Protolabs has partnerships with companies that specialize in color and material and that has been helpful.

How many parts have you manufactured at Protolabs at this point? Prototypes or low-volume production? Both?

We’ve done hundreds of prototypes and tooled up for low-volume production with on-demand manufacturing. We’ve manufactured thousands of parts for retail.

Are there any new designs of the product you can share? What's the future look like for LEAP?

We are working on a smaller version with less aggressive grip area and other changes based on feedback from hundreds of customers. Our tools are cut and ready to manufacture at Protolabs, so hopefully we’ll be needing to place large orders in the near future. Plus, there will be a need for more 3D-printed prototypes when we work on the new design.