The emergence of a market for CubeSats—or nanosatellites—has been an important trend to watch over the last few years, given the increase of space launch vehicle companies in the marketplace, such as SpaceX and others, which provide reduced-cost options to the sky.

The global marketplace for CubeSats is growing at a compound annual growth rate (CAGR) of more than 33 percent and is expected to surpass $550 million by 2022, according to sources. In comparison to their much heavier and larger siblings, CubeSats have a shorter development lifecycle and come with a significantly reduced cost associated with the manufacturing of the satellite. The smaller the satellite system, the less cost it takes to launch it into the sky.

This reduced cost in development and decreased cost associated with launch make the possibility of things such as a global internet and an internet of things (IoT) expansion possible. This post takes a look at CubeSats, explores how they can fit together into constellations, and tracks the development of IoT and a global internet. 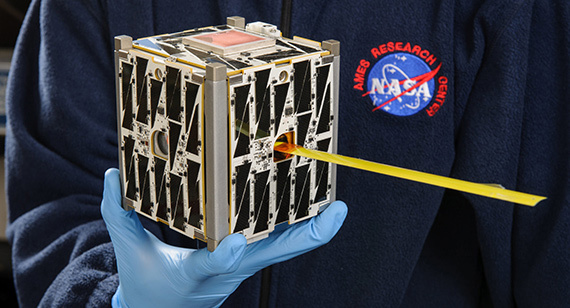 CubeSats reduce both development time and cost due to their small size and use of off-the-shelf components. Photo: NASA

What is a CubeSat?

A small satellite used for research in space, CubeSats can be made up of multiple units and are usually no larger than 4 inches cubed. These systems will normally weigh less than 3 pounds and use commercial, off-the-shelf components for housings and electronics. This helps significantly cut the cost associated with developing the systems. With commoditization of general use components, the developer of the system can put more development cost into the use case of the particular satellite. The design specifications for a small satellite system help achieve a number of goals, but the main goal revolves around cost of deployment. CubeSats can easily hitch a ride when there happens to be excess payload capacity on larger launch vehicles. The reduction of costs and development time make CubeSats an option for satellite constellations in low-Earth orbit.

Low-Earth orbiting satellites, also known as LEOs, are often deployed in satellite configurations known as constellations. Low-Earth orbit is considered to be an Earth-centered orbit with an altitude of no more than 1,200 miles. Constellations are groups of satellites working together in communication. These groupings of satellites work in conjunction with one another to provide consistent coverage to the ground below. The satellites must be positioned in such a way that they overlap for a period of time in order to maintain the coverage needed. Many LEO satellites are needed to maintain this overlap coverage.

You might be more familiar with satellite constellations than you think. If you’ve ever used your cell phone to navigate from one location to another, then you’ve accessed the Global Positioning Systems (GPS) network of satellites. The GPS network was launched more than 40 years ago and includes 31 satellites operated by the United States Air Force and owned by the federal government. GPS provides location capabilities to U.S. military, civil, and commercial users all around the world. If you have access to a GPS receiver, such as your cell phone, then you have access to an internet constellation for your own use.

A number of these CubeSat constellations are in development. Iridium Next is creating a system for cockpit safety for airplanes and ships. Boeing and SpaceX are both developing broadband capabilities to be used globally. There is a good amount to be gained by using CubeSats in constellations. With the increase of the global megatrend IoT, and the increasing demand for global internet, the race for low-Earth orbit will continue to heat up through the upcoming few years.

All of our devices are starting to become interconnected via the internet. Your watch communicates with your phone and both of them can communicate with the treadmill that you bought to better understand your heart rate and how fast you should actually be moving. This is all possible with IoT. The key to IoT is actually having access to the internet. The devices that we have may be able to communicate with each other in close range through Bluetooth technology, but, without internet access, the storage and transmittance of data over longer ranges would be impossible. While this IoT trend may be more popular in the developed world, we should expect it to catch on, grow, and expand in developing countries as access to technology and resources such as the internet become more readily available.

In conclusion, the decreased cost of CubeSat development and cost reduction in launch vehicles has led to the commercialization of space. Companies such as Boeing and SpaceX, mentioned previously, have the ability to quickly and cost effectively put satellite constellations into space that can provide global internet. While there are still many challenges facing the deployment of a system that would provide global internet services, it is seen as highly lucrative, and is currently being chased by large players in the tech industry. We are most likely no more than five years away from a global, low-cost solution for satellite internet.

Ultimately, the advancement of technology has always helped shape the world around us. The growing CubeSat industry has the ability to provide internet to the world’s entire population, giving increased knowledge and resources to those who may have never had access to it previously. Which commercial company will be the first to get there, and how will it change the world in the future?