Enhance prototyping and product development with this design program primer

Look around. Nearly everything that you interact with was likely a creation of three-dimensional computer-aided design (3D CAD)—homes, furniture, automobiles, lighting, smartphones, computers. At its most basic level, a 3D CAD program allows engineers to render their design in a three-dimensional model. Depending on the industrial focus of the CAD program and the modular extensions used to support and enhance its software, product developers and engineers are able to design extremely intricate products that can be built or manufactured.

At Protolabs, every single part submitted for manufacturing arrives as a 3D CAD model in one of several different file formats derived from different CAD programs. It’s what drives our entire manufacturing process and enables us to provide detailed design for manufacturability feedback within hours of a part upload.

There are a few major design programs that are frequently used in 3D CAD model development for prototype and production parts, and to an extent, most play well with one another when files are exchanged between platforms.

Additional neutral file formats that can be imported into and exported from most programs include:

The capabilities of each professional design program vary slightly from one to the next, but most contain versions of basic solid modeling; plastic and mold design; weldments, sheet metal, piping, and tubing design; and large assembly design.

Data management with revision controls, which is standard in some programs and an extension in others, helps CAD programs efficiently track model changes throughout the design process (including naming conventions) and monitors the historical and present activity with each design. If an engineer is working on a model, other engineers are prevented from unknowingly accessing the design and potentially overriding the work of the initial engineer.

Furthermore, if modifications are made to a complicated assembly that contains additional subassemblies, everything above it in its design tree is affected. The intelligence of the data management system allows it to automatically update any other pertinent areas in the assembly that the change in geometry affects.

There are also productivity tools within many programs that allow for things like geometric and feature comparisons between versions; analysis of thickness, draft, symmetry, and other design validations; and Bill of Materials (BOM) generation, among many other functions.

When transferring a 3D model from its native CAD program to an alternative program, the solid model information may remain intact. However, depending on the format, some of the design elements may be lost in translation. That is why when designers are sharing part files between multiple systems, they'll often export their models in a neutral file format that is not bound to a particular vendor, but rather controlled industry groups. The primary file formats with vendor-neutral data are STEP (Standard for the Exchange of Product model data) and IGES (Initial Graphics Exchange Specification), and, to a greater extent with 3D printing, STL (stereolithography).

If you're submitting a neutral file to be manufactured at Protolabs, we accept both STEP and IGES files for injection-molded parts. With that said, Protolabs accepts nearly all file formats. Note that STL files are limited to our 3D printing services.

When you're moving between two programs—regardless of whether it's uploaded into Protolabs' system or imported into your own—the loss of design intelligence can create what is called a dumb solid. When in this state, the model no longer contains its parametric attributes. If the face on one side of a part is moved, it no longer automatically moves any of the other features that are affected. You may be able to recalculate dimensions to create the change, but dragging a face to a new dimension will not propagate to the other design features it affects, so you're limited in that regard. CAD files that work within the same program typically retain that parametric knowledge. 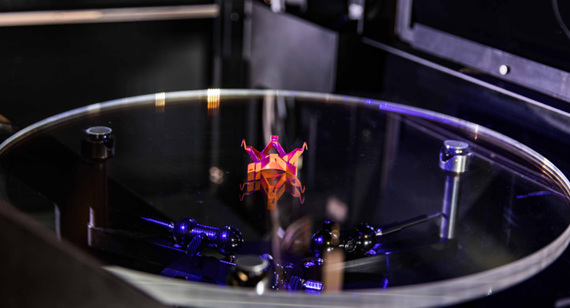 Defining geometric dimensions and tolerances (GD&T) directly within the 3D CAD model is a growing trend in the manufacturing industry. It’s a new approach to product design that is referred to as model-based definition. By annotating your 3D CAD model with product manufacturing information (PMI), you can eliminate the need for two-dimensional drawings, which are traditionally used to communicate details like surface finishes, materials, tolerances, and additional dimensional information to your manufacturing supplier.

Using the 3D model as the single source for design and manufacturing information drives further automation during production, reduces design cycle time, accelerates quality inspections, and leads to higher quality parts by streamlining communication between supplier and the product engineer.

Most professional-level CAD software packages like SolidWorks, PTC Creo, IronCAD, and Siemens NX all have functionality that supports an MBD approach to product design and development.

At Protolabs, you can add PMI to your CAD model to receive digital inspections on final parts. We use 3D scanners to measure critical dimensions specified by the customer such as hole locations, plane-to-plane, and ID/OD measurements. The scan then generates a report and color map to verify critical part dimensions. This is a fast, automated process that can be used to fulfill first article inspections (FAI) and other quality documentation requirements.

No matter what file format is uploaded at Protolabs, we provide automated design analysis on that model within 24 hours. We also have a feature in the design analysis that not only pinpoints potential manufacturability issues, but when a model requires only minor changes—e.g., draft on thin/thick sections—we'll provide proposed revisions on a second model. Our quoting software documents and illustrates exactly what the new model changes are, and you can either accept it or upload a new model. If a SolidWorks part file was submitted, we'll retain and make changes directly within the smart model before sending it back to you. If any other CAD program was used, you'll have the option to download either a STEP or IGES file.

Protolabs-accepted 3D CAD file formats are listed online at protolabs.com, and if you have a question about a particular program or format, please contact an applications engineer at 877-479-3680 or [email protected].