BattleBots clash for robot supremacy on ABC with help from Protolabs

Network television may seem like an unlikely source for manufacturing innovation, but don’t say that to the designers of the robots competing in season two of ABC’s BattleBots (a 10-episode run starts Thursday, June 23). Two competitors in the show turned to Protolabs recently for prototyping and end-use parts for their warrior robots’ “devious designs,” as a program promo described them.

“In the last several years, after using several vendors, Protolabs is the one I go to most often,” Rucker says. Why? In a word—speed. In fact, turnaround time was the biggest design challenge Rucker says he faced for his TV BattleBot, which he named The Ringmaster because its weapon is a ring that circles the robot. He started building his robot at the end of January, and needed to complete it in time for the television show’s competition, which was taped April 15 through 25.

“Protolabs is the one I go to most often. Why? In a word—speed.” 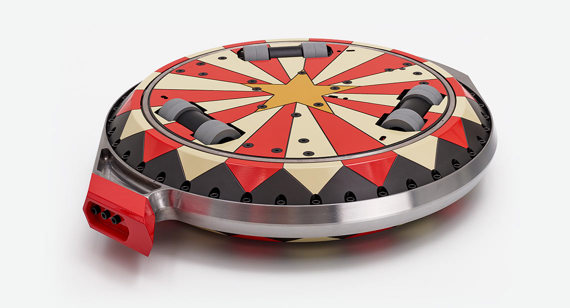 The Ringmaster (above) used this magnesium top plate (below) for the weapon motor assembly.

“The biggest deal for me was getting these parts done so quickly because I only had three months to design and build and test this very complex machine,” Rucker says. Throughout the design and build process, Rucker says, he ordered parts several times from Protolabs and always received shipments within three days of ordering.

A Suite of Services—and Solutions

Beyond speed, Rucker knew he wanted to use 3D printing for plastic prototypes and production parts, and CNC machining for magnesium end-use parts.

Indeed, Rucker says, he ended up being the only competitor on the show who fabricated most of the parts for his BattleBot out of magnesium. He chose magnesium because of a weight restriction rule, limiting the BattleBots to 250 pounds or less. “So I wanted to make it as strong as possible but as light as possible,” Rucker says. Note that Protolabs no longer manufacturers magnesium parts. 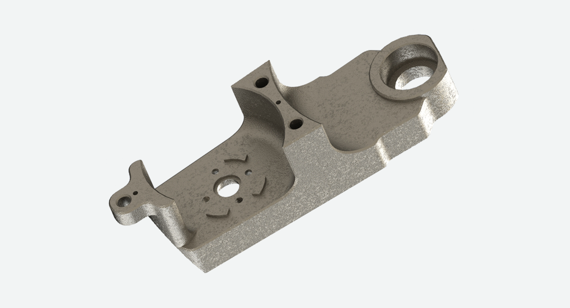 Protolabs manufactured several additional end-use parts for Rucker’s BattleBot. These parts included four 3D-printed (stereolithography) holders made of a durable ABS-like thermoplastic for its LED power indicators, several CNC-milled parts that came together as an industrial-grade chassis for the weapon-motor assembly for the BattleBot, and a machined face plate for the motor that is in the BattleBot’s drive system, which powers and moves the BattleBot.

Before actual production parts were manufactured, Rucker used Protolabs to produce two different prototype pulleys for the BattleBot’s eventual weapon, which were CNC turned on a high-speed lathe. Rucker made the final pulleys himself.

The final outcome? BattleBot designers were sworn to secrecy about who won the robot competition, so final results were not available. However, in terms of Protolabs’ parts performance, Rucker was pleased with the tolerance and overall durability of the parts. “The finished robot worked well and performed exactly as we had hoped and first drew it up. Everything, including the parts we got from Protolabs, lived up to expectations.”

The second competitor in the ring touting parts from Protolabs was Christian Carlberg. As an independent product developer and designer, Carlberg says, “It’s my business to quickly develop ideas for people.” As a result of that work, the San Luis Obispo, Calif.-based designer says, “Protolabs has been on my radar for a long time,” and he has used the company’s rapid manufacturing services for contracts he has done for a variety of companies.

Accordingly, when Carlberg and his 13-year-old daughter Carissa, working under the name C2 Robotics, began crafting their battle bot named Overdrive for the show, Carlberg chose Protolabs as his manufacturing supplier. 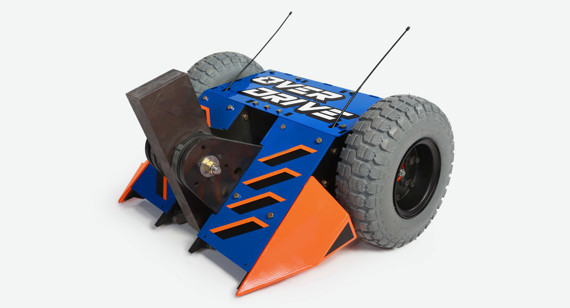 The Overdrive (above), featured on ABC’s BattleBots, includes several end-use parts that Protolabs produced, such as this component for the weapon-pulley system (below).

For Carlberg, Protolabs’ design for manufacturability (DFM) analysis was an especially key tool for this project. “My design philosophy is to have one complicated part and then keep all subsequent parts as simple as possible. I turned to Protolabs to make that complicated part. But I also found Protolabs’ online quotation system very valuable. It allowed me to evaluate and simplify my parts. It's a great service and great system.”

Protolabs milled the parts: shaping the parts, putting in the bearing bore, the outside shape, and the custom spline shape for a weapon bar. Following that process, Carlberg did the turning himself, for belt-transmission grooves for the pulley system. All parts made by Protolabs were end-use parts. 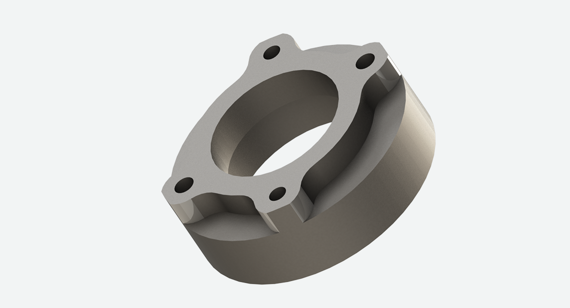 Carlberg says he was very happy with Protolabs’ parts, both form and function. “All of Protolabs’ stuff worked well and nothing broke.” He was also pleased with Protolabs’ quick-turn capabilities. “Normally, it would take you two months to have something machined and then heat treated; we were able to compress it to three weeks.”

This speed, Carlberg says, was especially important, given the tight deadlines involved in a television production. “The show was not going to wait for me to finish the robot. Sometimes, on a regular project, you can slip a couple of days, but you can’t miss a deadline on a TV show, it won’t get filmed.”

Happily, Carlberg says, though there were plenty of other teams that were “working last minute” on their robots, “We were one of the few teams that walked in with not one but two ready robots, hero and back-up, and I have Protolabs to thank for that.” We’re eagerly awaiting the outcome.