Automotive problems these days can be solved by reviewing recorded codes generated by a car’s computer. Mechanics can download these recorded events for diagnostic purposes. This system can’t diagnose every problem, but it has certainly simplified the identification and treatment of some of the most elusive and sporadic automotive misbehaviors.

Today’s cars may be complicated, but for complexity they can’t hold a candle to that little pump in your chest, the human heart. That simple “thump-thump” (or “lub dub” if you want to get technical) is the result of an intricate and sophisticated interaction of chemical, electrical, and mechanical processes, any of which could potentially cause malfunctions. Fortunately, like a car, the heart produces a variety of well understood electrical signals indicative of its operation. Unlike a car, however, the heart has no built-in recording equipment, but doctors have figured out how to provide that capability, and that’s where Eagan, Minnesota-based Braemar Inc. can help.

Braemar manufactures, both under its own name and as an original equipment manufacturer (OEM) for other companies, a variety of heart monitoring devices: digital Holter monitors, wireless event recorders, looping memory programmable monitors, and more. These devices use electrodes attached to the patient’s body to pick up impulses generated by the heart. The devices record these impulses while the patient goes about his or her daily activities and upload the recorded information to centralized medical systems at regular intervals.

There, the data is analyzed so that specialists can identify problems that may have shown themselves for mere seconds at a time over a period of days or even weeks.

An Evolution of Products

Braemar, which is now a subsidiary of Pennsylvania-based BioTelemetry Inc., has seen—and contributed to—a great deal of change in its 30-plus years. Early versions of Braemar’s products were large and, by today’s standards, extremely crude. At first they recorded data on magnetic tape. From there, the products evolved to smaller, more sophisticated analog and then digital devices, both of which are part of the current product line.

Today’s devices can be smaller than a cell phone, can record up to seven days of data in chip-based memory, and can run for up to a week without a battery change or recharge. Products vary widely in style and capabilities, from a basic model with no external display to others with sophisticated LCD screens displaying multi-level drop-down menus.

“It all depends on what the user wants,” said Gary Swenson, senior mechanical engineer at Braemar. “We design and sell monitors, under our own name, directly to doctors. A lot of [the monitors] are customized to a specific practitioner’s requirements. We also design OEM devices for companies that sell into cardiovascular centers and for drug testing. In FDA-mandated drug testing, the devices could be used to determine whether a drug causes irregularities in heart function.” 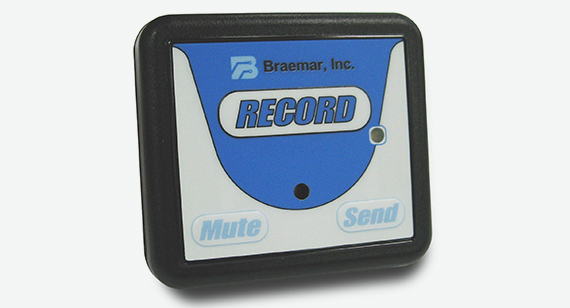 Braemar's heart monitoring devices use electrodes attached to the patient’s body to pick up impulses generated by the heart, then records these impulses while the patient goes about his or her daily activities and uploads the recorded information to centralized medical systems at regular intervals.

A large number of factors affect the design of Braemar’s product lines, which include analog and digital Holter monitors and cardiac event monitors. Within each line there are several models. Different devices use varying numbers of leads—from one to a dozen—to pick up signals from electrodes attached to the patient’s body. The monitors themselves can ride in holsters or clip onto belts. Some of the company’s newest products now incorporate Bluetooth or other wireless technologies. And, of course, any change to the insides of the device influence its configuration as well.

The company currently sells more than a dozen different models. According to Swenson, designs are primarily customer driven. Even the colors of the plastic and the shape, size, and type of switches can vary to meet customer requirements. “We always want to be first to market with anything we introduce, so product development has a very short window,” said Swenson. Whether we’re developing a product for our own use or for another company, once we’ve got the parameters, we want to be ready for market in three to six months. And because users wear our devices, we want them to be as compact, lightweight, tough, and reliable as possible. In other words, we need superior products, and we need them quickly. That’s where Protolabs comes in.”

A Need for Speed: Parts in Days, Manufacturing Accelerated

Before Protolabs, Swenson said, Braemar was using 3D printing for prototyping. “We were using stereolithography (SL) for most of our prototypes. The problem was that (SL) doesn’t use the same resins we use for production. There are significant integrity differences in the resins, so stress testing of those prototypes couldn’t give us useful results. We tried urethane molds, but that limited the number of prototypes we could produce, so we were still looking for a way to get inexpensive, molded prototype parts in a reasonable timeframe. Fortunately, with Protolabs, we now have a process that gets us to market fast with plenty of opportunity for rigorous functional testing.”

Standard product development at Braemar begins with development of a 3D CAD model using SolidWorks software. Models are carefully evaluated for manufacturability, eliminating, wherever possible, problematic features like undercuts. SolidWorks also supports finite element analysis (FEA), a method for calculating the strength of a design and specific material from a CAD model before the first solid model is produced. Braemar developers then make multiple SL prototypes to be evaluated in hands-on design reviews. The models are modified as necessary in CAD and re-prototyped as final SLs. Only then are they sent to Protolabs for production of injection-molded prototypes for functional testing.

“In other words, we need superior products, and we need them quickly. That’s where Protolabs comes in.”

“Designs have been pretty thoroughly evaluated at that point,” said Swenson. “But because SL doesn’t necessarily identify moldability issues, Proto Lab’s ProtoQuote system still makes occasional recommendations for design changes. These are usually minor – a change in a radius or the thickness of a wall. We use the Protolabs parts for functional testing based on AAMI (Association for the Advancement of Medical Instrumentation) testing protocols, but we usually test to twice the recommended standard. In other words, if a part is supposed to withstand a drop from one meter, we drop it from two meters. We may do up to three iterations with Protolabs to finalize designs for production.”

In some instances, Braemar also uses Protolabs for production. “Under 5,000 units, we usually stay with Protolabs,” says Swenson. “Above 5,000, we go to hard tooling. With orders for specially designed monitors, Protolabs’ fast turnaround for testing and production can be a big help. To move products quickly into the market, we sometimes end up making modifications on the fly in the later pre-production stages.”

As Swenson explained, “We’ve found that, with careful planning, Protolabs’ standard turnaround times of two-to-three weeks fit our schedule well. We have had a few situations, though, where we’ve had to use Protolabs’ faster three- or five-day turnaround. Besides fast turnaround at affordable prices, we’ve also found Protolabs helpful with ideas and information. They’ve got a lot of expertise on staff and can provide useful ideas and solutions based on that experience.”