Boat manufacturer Brunswick Corp.’s Sea Ray brand designs its luxury series yachts to offer extravagant comfort and top performance. The technology, fixtures, and finishes on the top-of-the-line L650 Fly (which sells in the seven-figure range) rival those of custom homes, with a lavish master stateroom, salon, gourmet galley, and home-theater system all on board. On the water, a push of the propulsion control system’s joystick sends the 65-footer in any direction the captain chooses while enjoying a commanding view from the “fly bridge” atop the boat.

No detail on such a craft is too small, to say the least. Not even something as seemingly mundane as draining the L650 Fly’s air-conditioning system. In a 2015 redesign, Sea Ray rearranged the AC drain lines so they empty from a single point on the hull rather than out of several points. Designers then created a grill to cover the point on the boats from which all of the lines drain.

“Our customers have high expectations and we work hard to meet those expectations,” said Randy Hasson, Project Leader with Brunswick's Recreational Boat Group in Merritt Island, Florida, which produces Sea Ray and Meridian yachts among other brands. "They're the kind of customers who push us to keep excelling."

The new drain line arrangement—and accompanying grill—soon extended from one Sea Ray model to three. As Hasson explained, the growing number of grills that Sea Ray needed created a supply challenge, which Protolabs would eventually be called on to meet with both its injection molding and industrial-grade 3D printing services.

“Protolabs’ ability to tool domestically to aluminum and get us that quality of part that we get from injection molding but without committing to hundreds of thousands of parts really opened up our eyes.” 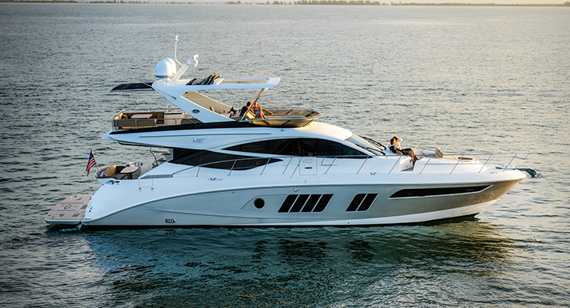 While the boat builder would have considered using a cast metal part, engineers said the grill had to be made of corrosion-resistant plastic. That’s because the part is almost always wet from draining the AC system and from saltwater exposure.

To meet that requirement, Sea Ray chose to have the grill made of cast urethane, Hasson said. The cost of that process escalated, however, because of the added expense of frequently replacing the disposable tooling used in urethane casting as production grew.

“When (the part) was at a really low volume it was okay,” Hasson said. “When we started to (include it on) smaller boats we were throwing away that tool every two or three weeks. We were getting only 10 or 11 parts per mold and then you’ve got to throw the mold away. The parts became very expensive...not in terms of part cost but in terms of having to throw away the tooling all the time.”

“Protolabs’ ability to tool domestically to aluminum and get us that quality of part that we get from injection molding but without committing to hundreds of thousands of parts really opened up our eyes,” Hasson said.

Beyond injection molding, Sea Ray also took advantage of Protolabs’ industrial-grade 3D printing service, Hasson said. Sea Ray, after submitting a CAD file through Protolabs’ online quoting system, had the rapid manufacturer build two or three D-printed iterations of the grill for testing as it worked through design revisions. Once a final design was in hand, some of the 3D-printed grills served as production parts, going on the L650 Fly until the injection-molded ones were ready. 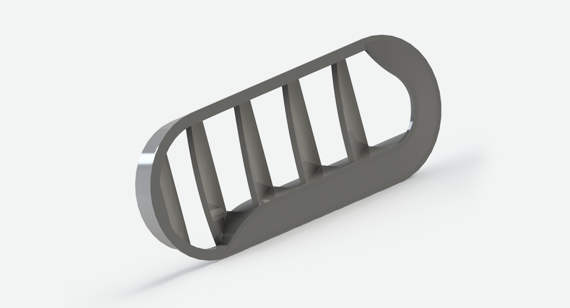 The grill was manufactured with ABS plastic. This durable, corrosion-resistant plastic was needed because the part would almost always be wet from draining the AC system and from saltwater exposure.

“Protolabs was definitely able to help us more seamlessly go from prototype to production, which is important in our market, to be able to make that transition quickly,” Hasson said. “Other times you’d have to have two different vendors, your injection mold supplier, and a machinist on the side who’s making prototype parts, and you’ve got to coordinate that whole changeover. With Protolabs, it was far easier to do that.”

The speed at which injection-molded and 3D-printed parts came from Protolabs has helped during design of the grill and in production, Hasson said. Molded grill parts were available in three weeks, “which in traditional injection molding is unheard of,” he said. 3D-printed parts shipped in four days.

As a result, Protolabs has expanded its work for the yacht maker to include injection molding plastic switch covers for another Sea Ray model. Injection molding is now used to create the cover’s switch cutouts and rounded edges, which previously had to be machined. Eliminating that step saves a lot of labor, Hasson said, and enables the blank covers to go straight to painting and have the name of each switch function engraved when needed.

“It really has opened up a new realm of things we can do,” Hasson said of Protolabs’ injection molding service. “It’s helped us to bring innovative products to market faster than what we would have been able to do with more traditional vendors of plastic parts.”