Can innovation be inspired by danger? Yes. Case in point: the birth of Pontos, the Saint Malo, France firm that’s reinventing sailboat winches. Pontos was co-founded by Michel Chenon and Darryl Spurling in 2010 after, as they describe it, a "hair-raising" close call that brought their sailboat perilously near the rocky outcrops of the narrow straits off the island of Brehat, France. The boat was equipped with a winch for the hoisting and furling of the sails that proved to be too physically challenging for the inexperienced crew to use. 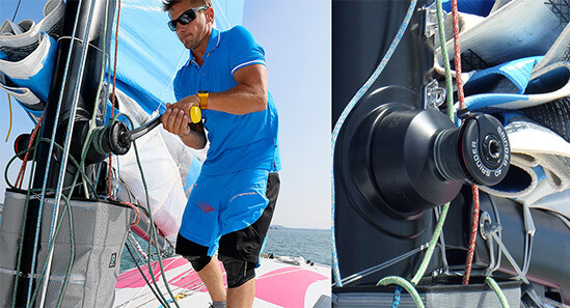 On the high seas, Pontos’ Grinder winch model has proven its worth in a variety of yacht races. Photo Courtesy: Pontos.

This adventure at sea led the two, along with a research and development team, to spend an intense three years creating and perfecting—with the help of Protolabs’ rapid manufacturing services—the design of what would become a game-changing new line of sailboat winches.

Curiously, though winches are a key sailing tool, they haven’t really changed much over the decades, except for the advent of electric winches, which have emerged in recent years. With Pontos, manual (non-electric) winches dramatically changed when the company introduced four-speed winches to a yachting industry that had previously offered mostly two-speed products. As Yachting World Magazine reported in a review last year, Pontos’ winches are "the biggest advance in winch design in a generation."

The winch models eventually launched by Pontos—based on the company’s patented technology—include the four-speed Trimmer, which provides more power with less effort for trimming the sails, especially for those recreational sailing crews that might not be exactly muscle bound; the four-speed Grinder, which offers greater speed and efficiency for more serious bluewater navigators or racers; and the two-speed Compact, which is intended for smaller boats crewed by novices, families or older sailors (the average age range of sailboat owners these days is mid-60s). 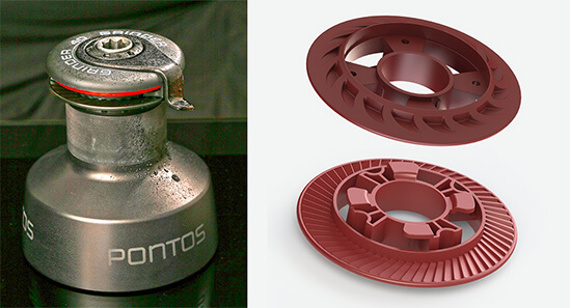 These now award-winning winches from Pontos would also eventually be used on sailboats that would win or be competitive in several notable yacht races and regattas worldwide. But, we’re getting a little ahead of ourselves here.

How a Four-Speed Winch Works

Though Pontos’ winches look nearly identical to more common two-speed counterparts, the company’s four-speed winches use a patented clutch and trigger mechanism that allows seamless and intuitive engagement of the two extra gears.

Most sailors know that, when grinding on two-speed winches, they simply change the direction of the handle to engage the next gear. The same principle applies with Pontos’ winches. The trigger mechanism moves up and down in the drum housing to engage the clutch; as the load decreases: the clutch automatically moves back down. In the Grinder model, those extra speeds are used to provide faster line handling. In the Trimmer, those gears provide more power when it’s needed most—hoisting or for final trimming under big loads.

A Prototyping and Manufacturing Solution

Chenon, who had worked in the medical devices industry, and various members of his Pontos R&D design team, had previous experience with Protolabs’ services, both quick-turn CNC machining and injection molding. Based on that work, they decided Protolabs would be a logical choice for the production of plastic parts for the winch, and, in particular, the parts for the clutch, the core of Pontos’ winch system.

“We had to work very quickly...to ensure that we had the competitive edge. Fortunately, we called upon Protolabs, which has been a top-class strategic partner.”

CNC machining was used for initial prototyping and testing, then developers shifted to injection molding for final material prototype parts and functional testing. As Chenon recalls, "We carried out several trials before arriving at the final product. Time was a crucial, strategic factor for the company ...We had to work very quickly, innovating, designing, manufacturing and testing winches and filing patents to ensure that we had the competitive edge. Fortunately, we called upon Protolabs, which has been a top-class strategic partner."

Additionally, Chenon explains, "We had to release the product to market as soon as possible. Protolabs always respected our deadlines and demonstrated a high-level of responsiveness, precision and discipline with regard to its commitments. We are very happy with our choice. Protolabs’ online processes, including the quoting system and the validation of our 3D CAD models, are efficient, simple and well-structured."

During Pontos’ R&D and early market production phases, Protolabs produced more than 20 parts for the clutches and winches, with the parts manufactured at the company’s facility in Shropshire, UK. Pontos chose to produce those parts with a sliding, rolling or rotating function using POM (acetal copolymer). Parts that needed to be rigid were made from nylon and parts in contact with the external environment—seawater and salt—were made from Nylon 66.

The innovative winches have proven their worth, garnering a number of industry awards, and becoming a winch of choice in the racing world. In 2012, Pontos won the prestigious European Observeur du Design Award. In the same year, Pontos collected a nomination for the DAME Design Award for technical innovation for new marine equipment, part of an annual international design competition sponsored by the European recreational boating industry. In 2014, Pontos received the SAIL Magazine Pittman Award for Innovation.

On the water, the 40-ft. GDF Suez, fitted with a Pontos winch, won the 2013 Transat Jacque Vabre, an 8,000- mile race with 30 competing yachts. In addition, another Pontos-equipped yacht, aptly named Thirsty, finished second in the 2013 Transpacific Regatta. Pontos winches were also selected by 12 racers in the 2014 Route du Rhum, a 3,542-mile transatlantic singlehanded yacht race. As Pontos’ Chenon notes, all racers in the Route du Rhum reported that the winches met the challenge. “This is immensely satisfying for us.”

More recently, Protolabs’ services have now been integrated into Pontos’ industrial model. Since Protolabs started collaborating with Pontos, the winch company has ordered more than 100 parts from the rapid manufacturing company. The adventure sails on.