Doubling Down on Solar

The microscopic mirrors inside the digital projectors that Arun Gupta was helping to develop reminded him of the vast solar arrays that concentrate the desert sun. The similarity inspired Gupta, founder of Texas-based Skyven Technologies, to seek a way to harness the power of reflected light on a more intermediate scale.

Gupta’s solution is the Skyven Cogen System, an innovative, highly efficient solar panel system that takes full advantage of solar energy. Leveraging multiple technologies, the system both generates electricity and heats water, offering what the company says is a lower-cost source of green energy for commercial and industrial users.

The Skyven Cogen System brings together traditional solar photovoltaic, concentrating photovoltaic and solar water heating technologies, Gupta says, incorporating the best technologies that have emerged from the billions of dollars and decades of study that already have gone into solar energy. “We did a lot of research into what else has been done,” Gupta says. “Rather than try to reinvent the wheel, we leveraged all of this previous work to combine the technologies in a way that makes them all better.”

Gupta, who has a doctorate degree in electromechanical engineering, was working in the digital light processing products division at Texas Instruments when he founded Skyven in 2012. He left to go full time with his early stage start-up in 2014 after eight years with the Dallas-based semiconductor maker. Gupta, CEO of Skyven, leads a three-person team that so far has self-financed the company and has applied for several government grants.

“Each panel contains an array of hundreds of small mirrors with mechanical drivetrains that move the mirrors to track the sun.” 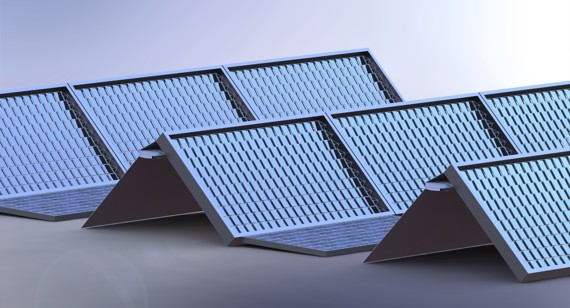 The Skyven Cogen System uses optical mirror technology in each of its solar panels to concentrate sunlight by a factor of 1,000.

A key component of Skyven's system is the optical mirror technology in each of its solar panels, which Gupta says concentrates sunlight by a factor of 1,000. Each panel contains an array of hundreds of small mirrors with mechanical drivetrains that move the mirrors to track the sun.

A majority of the system's mechanical components and some of the optical ones are plastic, and Skyven is having all of those injection-molded through a Protolabs Cool Idea Award service grant that Skyven received in January, Gupta says. “We're still in development, so the Protolabs' award is a big step forward for us in actually building a product using commercial manufacturing techniques,” he explains.

Protolabs 3D-printed prototypes of those parts through its rapid stereolithography (SL) process and also supplies machined metal parts for Skyven’s system through its CNC machining service. The mirrored surfaces are made from aluminum that is stamped elsewhere with a metal die that Protolabs made for Skyven.

The interactive quoting system at Protolabs—which offers design analysis and pricing information within hours of uploading a 3D CAD model—has helped save time and money for the start-up, Gupta says. “The innovation that Protolabs brought to the injection molding market made it very easy to work with them remotely,” Gupta says. “It's a matter of uploading a design onto their website and then they give you very fast feedback on the moldability of the part, which is very useful. It makes them fast, easy to work with and also pretty low cost.”

Skyven is on its fourth prototype version of its product, Gupta says. Major iterations have included moving from plastic to aluminum mirrors and to injection-molded plastic parts in place of 3D-printed ones. 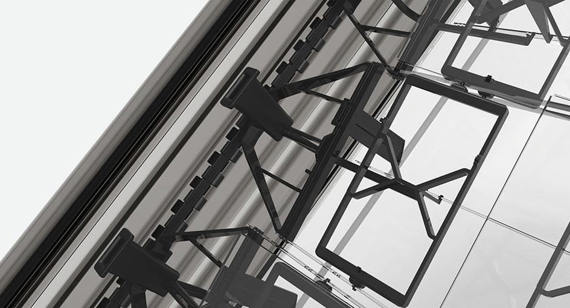 A magnified rendering of the system shows the framework of the panels.

“There are ways to convert sunlight into electricity with a regular solar panel,” Gupta says. "And there are obviously ways to create heat from sunlight with a black panel. But to do both simultaneously and to do both well simultaneously is where this technology really shines.”

The primary industrial use that Skyven is evaluating is to water desalination plants. “The water crisis is growing,” Gupta says. “One way to get salt out of seawater and make it fresh is to distill it. But you need a lot of heat to do that. Our panels capture the sun’s heat and concentrate it, which makes them a perfect way to power a desalination system.”

Skyven completed a pre-production version of the Skyven system in mid-2015, followed by implementing pilot systems shortly thereafter. Assembled panels would undergo testing at the renewable energy laboratory at Texas A&M University, explains Gupta. Skyven then sent panels to a third-party testing lab for independent verification of their performance.

Protolabs' founder Larry Lukis helped Skyven arrange for a pilot installation at Gustavus Adolphus College, a small private college in St. Peter, Minn. The Omni Dallas Hotel, a hotel owned by the city of Dallas and attached to the convention center, also expressed interest in serving as a pilot location. In 2016, Skyven commercially released its Cogen System to the market.