Gearing Up for Production

From frozen trails to rugged desert valleys and muddy creeks, power-sports vehicle drivers put their machines to the test. Producing custom parts for many of those snowmobiles, utility vehicles, and motorcycles—on short production cycles and with manufacturers gearing up for large-scale production—is another sort of test for Minnesota-based Sportech, Inc.

Sportech got its start in 1994 as a home-based business when the father-and-son team of Dallas Carlson and Chris Carlson began making a plastic shield that kept snow from building up in the headlights of certain Polaris snowmobile models. 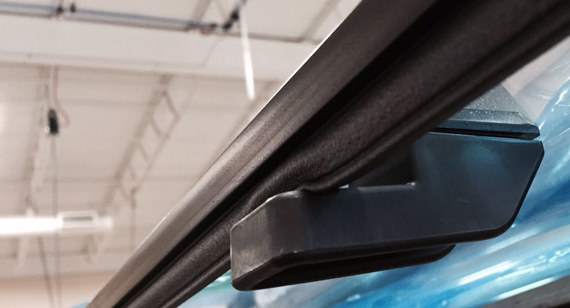 When Sportech quickly needs parts, the company regularly uses Protolabs, says Negri, who leads product development with an engineering and technical staff of 25. One example involves Sportech's development of plastic clips and hooks used to attach a windshield to a specific model of UTV, he says.

Sportech had the design complete but needed a run of parts to test before its customer went into production with larger-scale injection molding. But getting test parts from the mold, once it was done, would take at least six weeks—time that Sportech didn’t have.

“We needed to use that time to be testing, and didn't have another six weeks to wait for the parts to come out of the mold to start,” Negri explains. “Product development isn’t always behind but it seems like we're always in a hurry, so days certainly can make a difference at that stage.”

Negri's solution was to use Protolabs’ CNC machining service to produce the clips and hooks while another vendor completed the high-volume injection molding tool.

“We were able to physically test the [machined] parts and validate them, so when the injection-molded samples came in we were able to keep running and hit our timelines.”

“We turned to Protolabs, and they were able to machine those parts in a few days,” Negri says. “The customer agreed to validate with the Protolabs parts. We were able to physically test the parts and validate them, so when the injection-molded samples came in we were able to keep running and hit our timelines.”

That helped Sportech help its customer begin high-volume production of the parts, Negri says. More than 100,000 of them have been produced since.

“It gave us confidence in the design,” Negri says of the parts Protolabs produced. “We knew when the [injection-molded] parts did come in, we had a relatively high level of confidence that the tool that we just purchased was going to perform as we designed it. It was great from a durability standpoint but also for an ultimate design validation.”

Sportech has an in-house 3D printer that it often uses for initial design validation and quick, iterative design changes, Negri says. But 3D printing wasn't suitable in this case because one of the parts had a snap feature that required a higher level of durability.

"When we have to go into testing or have a feature that relies on the material properties of the plastic that we're ultimately going to use, like a snap feature, 3D printing is not a good proxy for the end product," Negri explains. “The only option to test those parts—other than building the tool—is to machine it."

Sportech chose glass-filled nylon 6 to machine the clips and hooks. “Nylon 6 is extremely durable,” Negri says, also noting its resistance to ultraviolet light. “It's a tough material that performs well in the harsh environment the product is used in. We have a lot of good experiences using that in our outdoor, UTV-style applications.”

Negri says the turnaround time at Protolabs is impressive: “They have a really slick process, so we tend to use them for that,” Negri says. "Sometimes we come to them when we're in trouble. We've had them build injection molding tools in short order for some limited-run production stuff that we needed really fast, or, if we have a component that failed in testing and need to make changes to it to vet out that solution before it goes to production.”

Negri also uses Protolabs' online system to get quick interactive quotes and design feedback on parts to keep product development moving. In fact, the only time he really needs to speak to an actual person at Protolabs is when he wants to physically pick up the part himself rather than have it shipped since Sportech and Protolabs are in proximity to each other.

Sportech continues to develop new versions of those clips and hooks, and many other components, as power-sports manufacturers introduce new models. The popularity of recreational and utility vehicles is helping to drive the company’s expansion into a new 105,000-square-foot building that will improve efficiency, support new manufacturing processes and include warehouse space, according to company officials. Construction of the $3.8-million project in Elk River, northwest of Minneapolis in the Twin Cities metro area, is to begin in fall 2015.