Mel Du was on the hunt for a source to manufacture metal parts for a student research challenge project he was working on for NASA. The project centered on designing, building, and testing an asteroid-sample retrieval and containment device for a simulated space mission. Heady stuff for the freshman engineering science student at San Antonio-based Trinity University, and his team of three other first-year students. 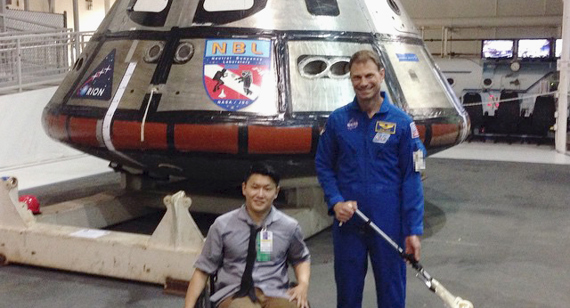 The team, which also included Tanner Peterson, Davis Owen and Samy Abdallah, worked throughout February, March, and April on the NASA project inside Trinity University’s high-tech, $130 million Center for the Sciences and Innovation, which opened last year. As a part of the development stage, the team churned out several prototypes on the center’s in-house, production-model, fused deposition modeling (FDM) 3D printer.

Du concluded that, while the 3D-printed parts were great for prototyping, the plastic (ABS) parts would not be strong enough for actual use in space. That use would also first include NASA’s testing of the team’s device, which they dubbed the SHARC—Sampling Hardware for Asteroid Retrieval and Containment. The testing would eventually occur this past June in the simulated microgravity environment of the Neutral Buoyancy Lab (a giant swimming pool) at the Johnson Space Center in Houston. The research project is part of NASA’s Microgravity University and its MicroG NEXT Program. 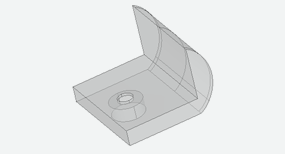 Protolabs fabricated several SLS and machined parts for the SHARC tool, including this retention pin cover.

With the limitations of FDM, Du turned to Protolabs for help. He knew of Protolabs’ capabilities in CNC machining and other manufacturing processes because he had heard about Protolabs’ Cool Idea Award. The award program provides prototyping and low-volume production services to entrepreneurs and others developing new products in the United States and Europe.

“We had been in a rapid prototyping mode, using a 3D printer,” Du recalls. “We tested several different designs, several iterations, but once we came up with our final design, we knew we needed something for doing the real testing that was more durable than the plastic prototype parts.”

The SHARC is not an automated retriever, but essentially a hand-tool, something astronauts could use while wearing their gloved space suits, explains Jack Leifer, an associate professor of engineering science at Trinity. Leifer served as the faculty advisor for the project. 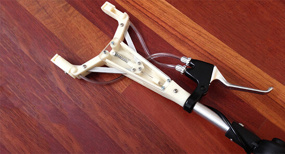 The SHARC is a hand-tool that astronauts will use in space while wearing their gloved suits.

The astronauts, for the simulated space-walk asteroid mission, would use and maneuver the SHARC device to dig into an asteroid, grab surface samples and then seal off those samples, to prevent the risk of contamination. In a real mission in space, those samples would be kept for eventual analysis back on Earth.

“So the SHARC, and the parts that made up the device, had to be of sufficient strength and integrity to work in this high-stress environment,” says Leifer.

Protolabs helped the Trinity University team advance the SHARC device development with machined aluminum parts along with commercial grade, additively manufactured, glass-filled nylon parts with selective laser sintering (SLS). The machined parts Protolabs fabricated were several retention pins and retention pin covers; the SLS parts included a left and right arm for the device, a slide, a plate and a handguard with a tether loop.

Into the SHARC Tank

In June, the Trinity University students traveled to Houston to lead the testing at the Johnson Space Center, which included working with astronauts and others at the Neutral Buoyancy Lab, and directing their activities in the pool as a part of the test. The device worked well throughout all of the testing.

Additionally, though the asteroid mission for now is a simulated one, the intent of this research project is that NASA may eventually operationalize the SHARC tool for future space missions. Beyond the testing, the Trinity team also is writing a technical paper about team members’ design, engineering and research work, and finishing up an educational outreach presentation, which was also a requirement of the overall project.

Trinesha Dixon, who is a program manager and education specialist for NASA’s Microgravity University, explains that these projects are opportunities for NASA to engage universities in “what we’re doing at NASA and with our missions,” and, at the same time, expose students to hands-on engineering design and test operations. “The students are making a direct contribution to NASA’s overall mission. They are contributing to the advancement of space exploration.”

Leifer, the faculty advisor, who has had extensive experience guiding students on NASA projects at other universities, says he was gratified with the process and results of Trinity’s NASA project, and especially impressed with Mel Du’s work. “He is a highly motivated and talented young man. I was floored when I saw the quality of his 3D drawings of the devices he wanted to build for this project. Quite impressive, especially coming from a first-year student.”