Ready for Take Off

Space exploration fuels David Deng’s sense of wonder and his desire to help humanity expand to that final frontier. At the same time, the University of Minnesota aerospace engineering student is well grounded about the challenges he and the student rocketry group he established face in achieving their goal of flying a rocket.

Their plan—to launch an 8-ft.-long, liquid-fuel rocket on a flight that would reach a height of up to 3,000 feet—got a boost recently from Protolabs, which produced a 3D-printed rocket engine the students designed, and donated it to the group.

Deng, a senior at the Twin Cities campus, is leading the extracurricular effort to design, build, and some day fly a liquid-propellant rocket as project manager of LPRD Rocketry. The group’s name, pronounced “leopard,” is an acronym for Liquid Propellant Rocketry Design. The group, which ranges from a handful of members during summers to 30 or so when classes are in session, includes additional aerospace engineering students and others studying electrical engineering, computer science, mechanical engineering, and materials science.

When Deng’s interest in space led him to explore hobby rocketry, he found that most amateurs use solid-propellant rocket motors. Looking into why more hobbyists didn’t use liquid-fuel rockets, he and other students discovered a 1960s-era book assuming that “amateur liquid rocketry was going to be the next big thing,” Deng said. That provided the impetus for Deng to form LPRD Rocketry in the fall of 2014.

Design Challenge: Scaling Up, Scaling Down

The group got started with a small engine made mostly from parts members machined and off-the-shelf piping and plumbing to deliver the fuel. That small engine produces 100 newtons of thrust (a metric measurement equal to about 22.5 pounds-force, where 1 pound of thrust is the amount necessary to keep a 1-pound object stationary against the force of gravity on Earth).

To scale up, LPRD Rocketry needed a bigger, 1,000-newton engine and a cooling system that didn’t involve pumping in water from a garden hose to keep the motor from melting. “You obviously can’t fly with a garden hose attached to a rocket,” Deng said.

The group’s second-generation engine solves that problem with regenerative cooling, a common concept in rocket design. That method involves cycling the liquid fuel, kerosene, through a spiral channel in the metal engine wall, surrounding the combustion chamber.

The cooling channel is designed to lower the temperature of the metal walls of the chamber from nearly 5,000 degrees Fahrenheit to close to 1,200 degrees. To get the fuel moving fast enough to cool the engine sufficiently requires using just a single channel, which forms descending loops through the length of the engine wall, Deng said. The width of the engine wall also is a consideration, with the structural strength of a thicker wall balancing the greater heat transfer ability of a thinner wall.

“3D printing is essentially the only way to get regenerative cooling on an engine this small.”

“The manufacturing of it is incredibly difficult using conventional methods, especially for a very small engine,” Deng said. “The struggle was how do we get a single cooling channel through this entire engine, coiling around the side of it? That’s where Protolabs came in. 3D printing is essentially the only way to get regenerative cooling on an engine this small and have it be a single channel.”

Deng, who works at a research and development job in Minneapolis, contacted Protolabs through a company executive his boss knew. That led to a tour of Protolabs’ rapid manufacturing facilities for Deng and other LPRD Rocketry members, a presentation about Protolabs’ 3D printing capabilities, and an offer to print the group’s second-generation motor at no cost to the students.

The students uploaded their 3D CAD file of the part to Protolabs’ online quoting system. A Protolabs engineer suggested modifications to optimize the design and speed the build time, Deng said. One iteration was to change the channel from circular to teardrop shaped for easier printing. Another was to modify the angle where the body of the engine tapers from 60 degrees, which Deng said was typical in rocketry design, to a self-supporting 45 degrees. This change eliminated support structures that otherwise would be necessary to stabilize the part during printing and would add time and cost to the build.

Deng chose Inconel 718, a high-strength, corrosion resistant nickel chromium super alloy, for its high-temperature resistance and other considerations. “The space shuttle’s main engines used Inconel,” Deng said. “We figured if the pros do it that way we’re not going to question the pros.”

A Protolabs engineer suggested modifications to optimize the design and speed the build time.

LPRD Rocketry hopes to conduct a ground-based test firing of its 3D-printed rocket before winter at the earliest, Deng said. Before that happens, LPRD Rocketry will test fire a scaled-up version of its water-cooled engine. Students made that engine out of aluminum using a lathe and a mill in a student machine shop.

“We’re not going to fire the Protolabs engine first because we really, really don’t want to break this nice toy that they gave us,” Deng said. The group also is exploring backups in the form of a ceramic rocket engine, with its high melting point and a water-cooled engine that would carry its own water supply.

While a full launch is some time off, members of the rocketry group already have gained valuable hands-on design, building, and testing experience. Working with students in other disciplines, and interacting with engineers and others at launch sites also has given them a taste of the professional world that lies ahead. 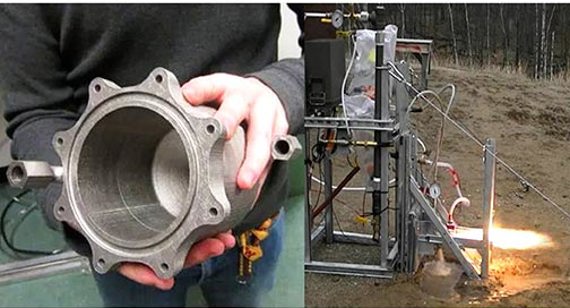 The rocket engine component has internal channels that can only be fabricated with additive manufacturing.

“We try to be as close to industry as possible,” Deng said. “We expect a lot of our members so they really grow incredibly while they’re with us.”

He also feels like he’s contributing in a way that may help extend our reach into space.

“Even though it’s not going to be in my lifetime where we move off the planet, setting up that foundation is a very important thing to be doing,” the 21-year-old Deng said. “It's my way, hopefully, of trying to make a lasting impact.”