Twenty years ago Larry Lukis was frustrated with how long it took to get injection-molded parts. So, he began writing more than a million lines of code to automate the manufacturing process and radically reduce production time. Starting in a garage in Long Lake, Minn., and then a space in Maple Plain that eventually became Plant 1, Protolabs (originally Proto Mold) spent the next two decades expanding, eventually becoming a global leader in the digital manufacturing revolution.

What was the biggest pain point that led to starting Proto Mold?

In my previous life as design engineer and product developer, we were always frustrated that it took so long to get prototype mechanical parts. We could literally get prototypes of complex electronic circuit boards faster than a simple bracket. We used to laugh because at the time, if somebody built a mold and delivered parts in a month, they would write a magazine article about it. 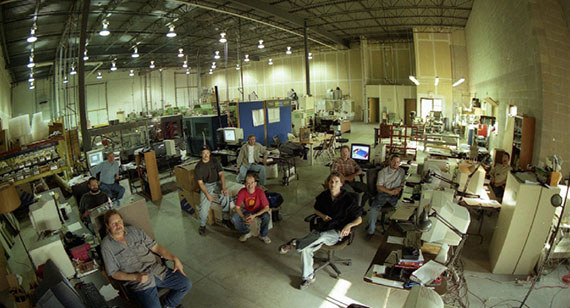 During the formative years at Proto Mold, all functions worked together, including manufacturing, shipping, administration.

How many employees did the company have when the doors officially opened?

That depends on how you define “officially opened,” but I’ll define it as when we started running pay-per-click ads on Alta Vista! And, took our first order from a customer where we had no previous contacts. The answer is two, Gregg Bloom and myself. But, I don’t know if you could call us employees, because neither of us were getting paid! Possibly by the time we delivered that order, Mark Kubicek had joined too.

Do you remember the first part ever made?

Ha! I will never forget it. It was a clear Polycarbonate bezel for some new Maytag appliance. Our customer was one of the local design shops. We had probably made fewer than 10 molds at that point, and this part was much larger than anything we had done—about 14 in. long and 2 in. wide. The whole part had to be finished with a 1/32 in. endmill, and it took three days to run in our only Haas mill. The mold was not a complete success because it warped in the mill and flashed very badly. It took about an hour to trim the flash off each part.

Do you have a favorite memory from the first year in business?

Mark Kubicek pointed to a box of plastic parts waiting by the door for UPS pickup and said “See that box? $3,500.” I thought “Whoa, that’s cool! I think I like this business.” And early investors said we should just sell the software. 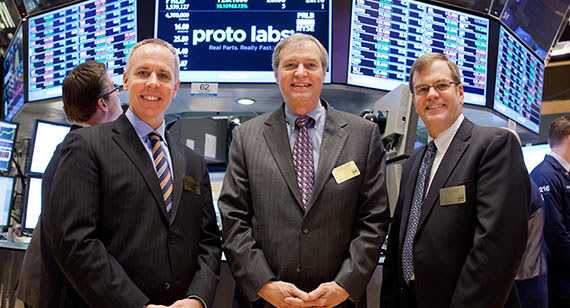 What about an all-time favorite memory from the past 20 years?

That’s easy—the relationship that Brad Cleveland and I developed. Brad came on as CEO in 2001, and he grew the company from $1 million revenue through $100 million and the IPO. After Brad started, I never had a direct report again (my dream job) and was able to focus 100 percent on our core software technology.

It was like this: I go in to the shop on a Saturday morning and find that the water softener has sprung a leak and the place is half flooded. I call Gregg and he comes in and works all weekend to replumb the place. Or the time when the IT system was acting up, and we almost lost all the data, and our software developer came in on his birthday and took three days to carefully copy all the data from one sketchy drive to a few new ones. In those days culture was easy. Everybody knew everybody and would do whatever it took to keep things in motion.

When you started the company 20 years ago, what did you envision for the future? Did you picture Protolabs growing to the point that it is at today?

I had high hopes for what we could become, but NO, I did not picture this. Protolabs has exceeded my wildest dreams by about 10 times.

Is there anything that surprised you most about the company’s growth?

The scale of the company has been a big surprise, but the direction is exactly what I had in mind on day one: Make it easier and faster for product developers to get prototype parts, accelerate development cycles, and make advance manufacturing technologies accessible for everyone from startups and individual makers to Fortune 500 companies.

What are you up to today?

Still living the dream, which in my case is working with small teams of smart engineers developing cool ideas. I’ve returned to my electrical engineering roots and am having a blast working at a startup incubator on a variety of projects from sonar for underwater vehicles to robots for agriculture.