For patients in the ICU, caregivers use an average of 66 pieces of personal protective equipment (PPE) daily, much of this for entering the room several times a day just to manage the intravenous (IV) pumps delivering essential medication and nutrition. While originally developed as a way to move IV lines off the ground, increasing patients' freedom and reducing the risk of infection, the High-Line™ also helped reduce the amount of PPE use during this critical time of the coronavirus pandemic. Enabling IV stands to move outside of patients' rooms, using the High-Line IV device means caregivers no longer need to wear and dispose of a new set of PPE several times a day to manage the pumps.

The High-Line inventors teamed with Cleveland Clinic Innovations (CCI), a branch of the Cleveland Clinic Foundation (CCF) that works to turn medical breakthrough inventions of CCF caregivers into patient-benefiting medical products and companies. As a longstanding partner with CCI, we were happy to help with injection molding services when the team turned to us to produce the product. Members of the CCI team share the idea behind the product, iterations that got it to where it is today, and what's next. 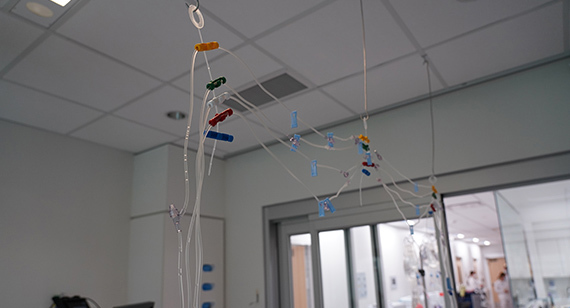 The color-coded clips move the IV lines off the floor and help caregivers differentiate between the different supplies.

What is the High-Line and what is it used for?

The High-Line is a 2-part system—a 10-inch silicon stem with small cones every one inch and an O-ring that allows placing the product on a wall or ceiling hook, or 'zip-tying' it around poles or rails. The stem is flexible and can stretch to prevent tension on IV or enteral insertion sites when tubing manipulation occurs. Cradles are used to secure tubing in place and are easily added or removed to the stem as needed. As part of the adaptation for ICU use among patients requiring multiple lines, the High-Line was revised to allow up to eight cradles per stem. The cradles come in five colors, thus, individual IV tubing can be attached to the same color cradle of multiple High-Lines that are used from IV pump to patient. This adds an additional safety feature of nurses' being able to follow their lines of medications from the pumps to the patient.

What was the inspiration behind the design; how was it developed?

One of the inventors, Jane Hartman, APRN-PNP-BC, observed over the past 40 years hospitalized children walking (and being wheeled in wagons) with IV tubing dragging on floors. Hartman (and patients' parents) were worried about it getting caught in IV pole wheels and stepping on it, potentially dislodging the device. Hartman was also concerned about the effect that dragging IV tubing may have on patients with central lines and the potential for infection. She developed a rudimentary prototype from the contents of her desk drawer. The concept was not fully understood by the innovations team until Hartman collaborated with her son over Christmas dinner—they apparently speak the same language! He produced a 3D-printed version of the High-Line, and the CAD drawing assisted with the design and development of the current cradle.

What are the inventors' backgrounds?

Hartman is a pediatric advanced practice nurse with a special interest in vascular access and innovation. Co-creator Nancy Albert, PhD, ACNO, is a nurse scientist, innovator, and mentor to nurses in both nursing research and innovation, and a nursing leader at the Cleveland Clinic. Hartman was the originator, and Albert assisted with refinement. Both collaborated on re-works and enhancements. 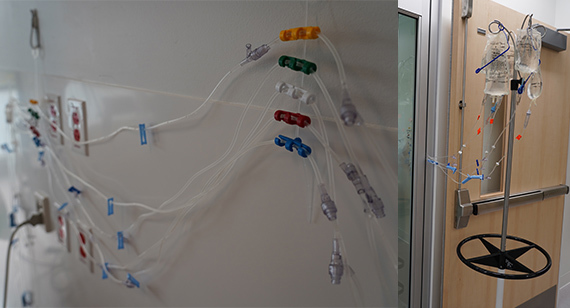 The High-Line helps move IV stands out of the room, reducing the number of times caregivers enter the room to manage the IV needed to deliver essential medication and nutrition, thus reducing the amount of PPE used.

Who are your target customers and how will this product help?

Did you run into any challenges during the product development?

There were a handful of design and molding challenges that came up. The CCF team met regularly with Protolabs' design team to overcome all of the challenges. It was a group effort at all stages of development.

What materials were used and why?

Silicone was chosen for the stems due to its durability and elasticity. The silicone has some give if the IV lines are pulled and returns to shape once the tension is released. The cradles are polyether. This material was chosen because it had the right balance of rigidity and softness, allowing caregivers to easily place the IV lines in the cradles and secure the IV lines while in use.

How many major prototype versions have there been? How was the design modified?

How many parts or runs have been produced for you?

Four or so runs—enough parts have been made to make 5,000 High-Line assemblies.

Are you working on any new versions of the High-Line?

Possibly a smaller cradle to hold micro-bore tubing better. The current version works, but this modification would be an enhancement.

We are currently seeking a commercial partner to take over sales and distribution.