Heavy equipment and machinery manufacturers are moving vigorously into digitalization these days to keep pace with the surging growth of the global construction industry that these manufacturers serve. By 2030, analysts estimate that the construction industry will grow by $8 trillion, led by the U.S., China, and India, which will account for 57% of all global growth. The report forecasts the volume of construction output will grow by 85% to $15.5 trillion worldwide by 2030.

Along these lines, the construction sector is seeing a dramatic rise in the use of drones, the increased use of on-site data, and the emergence of autonomous or driverless dump trucks, bulldozers, excavators, and other heavy equipment. 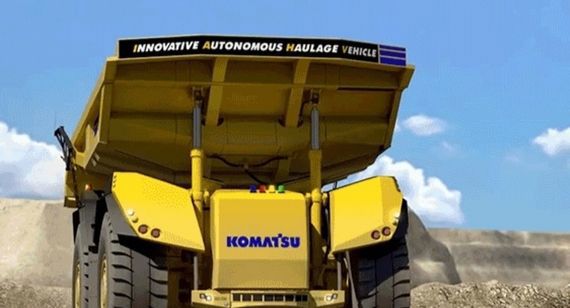 Komatsu has been using autonomous dump trucks for more than a decade. Photo: Komatsu

Drone Use in Construction Soars

Data and Connectivity at the Work Site

A construction site is a constantly moving and ever-changing amalgam of machines, materials, and people. This interaction is now being greatly aided by digital tools such as the internet of things (IoT), cloud computing, wireless technology, and on-site Wi-Fi, making a digitally harmonized and integrated construction process a reality, from managing floor plans to supporting project or task management. Further, smart construction equipment can provide contractors with critical information in a dynamic environment, allowing contractors and others to collect data in real time and act upon it accordingly.

Autonomous or self-driving vehicles are also rolling on to the heavy machinery landscape at construction sites, mining operations, oil drilling enterprises, farming operations, and more. Indeed, many of these vehicles have been in use for some time.

Meanwhile, heavy machinery companies such as Komatsu, Caterpillar, and Volvo Trucks are already using autonomous heavy equipment vehicles in mining and other operations around the world.

In addition, in a remote, thinly populated region of Western Australia, dozens of 250-ton Caterpillar trucks are working autonomously—without human operators in the cab. Sophisticated on-board intelligence and advanced guidance technologies make it possible for these giant trucks to maneuver through mine-site traffic, back into loading points, and navigate the dump sites—all without human intervention.

Finally, at Protolabs, we pay close attention to this heavy equipment industry. Our custom parts and digital manufacturing processes are aiding heavy equipment OEMs and others in the industry in making this digital shift. At the same time, we’re also helping many other companies such as construction firms—which use all of this heavy equipment—to service and support a large inventory of existing equipment and machinery with elongated life cycles—products and equipment that have been put into use decades ago.