The Curious World of 3D Printing

It’s nearly impossible to have a conversation about the current state of manufacturing without mention of 3D printing, an additive process that uses digital CAD models to build physical, real-life objects, layer by layer. While additive manufacturing has existed for more than 30 years, it wasn’t until the last few that 3D printing, led by increased accessibility, has become the poster child for progressive technology within the industry—NASA prints telescope! Designers print runway pumps! Scientists bio-print human organs!

It’s undoubtedly an exciting time in manufacturing that has many eager to see what the future brings, but can the promise of a printed world withstand the heat? We deconstruct the layers of 3D printing to find the substance beneath the style. 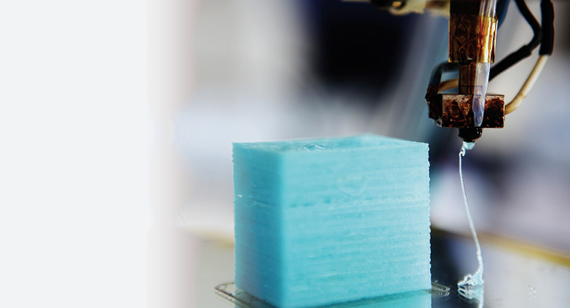 The relationship between 3D printing and additive manufacturing is akin to Google and Web search or iPod and mp3 player. They’re essentially interchangeable with the former used much more frequently as an umbrella term that describes the latter. Technically, 3D printing refers to the process of building layered objects with an actual inkjet printer head; Z Corporation cleverly trademarked a process in the early 1990s called 3D printing (3DP), where a printer head solidifies powder layers with a liquid binder. However, a decade earlier, engineer Chuck Hull developed stereolithography (SL), which truly marked the dawn of 3D printing. Along with SL, which uses a fine laser to solidify layers of liquid thermoplastic resin, many other 3D printing technologies fall within additive manufacturing, namely:

The rapid rise of 3D printing is due in part to the growing consumer-level DIY culture known as the maker movement—individual inventors and entrepreneurs who now have affordable desktop printers at their fingertips (as low as $100 with crowdfunded machines like Peachy Printer). Minnesota-based 3D printer, Stratasys, selld its MakerBot printers for around $1,400, which use an FDM process. Others like Formlabs, use SL to print parts with machines that land around $3,000. Most desktop printers are paired with a simple design program, but of course, all accept uploaded CAD files. That means it certainly helps to be versed in a 3D CAD program such as Autodesk Inventor, PTC Creo or SolidWorks, a potential obstacle for novices of computer-aided design. Free 3D modeling programs like SketchUp Make are a good starting point for first-timers. If owning a 3D printer is unappealing, maker marketplaces like Shapeways exist, where consumers are designing and customizing products that the company builds with various 3D printing processes. Products and parts are then bought and sold online in Shapeways’ consumer shops 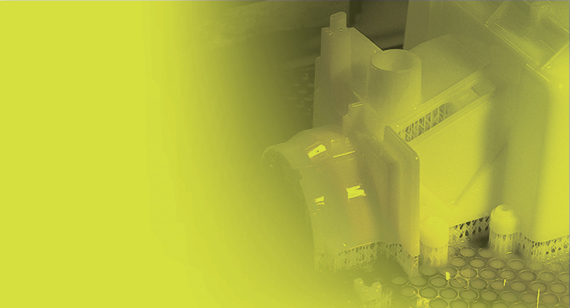 Building a part in thousands of thin layers from the bottom up affords those designing CAD models for 3D printing the opportunity to create highly complex geometries that are often impossible to mold—internal channels and holes that are unreachable by end mills, or entire assemblies printed as a single piece. But what happens when additive prototypes are ready to graduate to injection molding? Moving from stainless steel prototypes built by DMLS into low-volume metal injection molding (MIM) works as a good product development example. Whereas the importance of molding-specific design considerations like draft, radii and uniform wall thickness are minimal in 3D printing, once a shift is made into MIM, these elements become much more critical. At Protolabs, our automated software identifies moldability issues and recommends solutions in an interactive quote. That might mean a bit of design retooling, but it can quickly turn a printed prototype into a production-ready part.

A complicated web of U.S. patents that pertain to additive manufacturing processes have been issued over the last few decades. Until recently, it was a legal barrier that had limited 3D printing largely to the commercial industry. A number of those patents that involve three major processes—SL, FDM, and SLS—have since expired, which has opened the three-dimensional gateway even further for those looking to develop, and monetize, 3D printing. The noisiest additive boom arguably came with the expiration of Stratasys’ FDM patent in 2009, giving rise to a wave of 3D desktop printer startups, many of whom took to crowdfunding sites to launch their companies. (As of midSeptember 2014, 128 campaigns within the 3D printing category were seeking funding on Kickstarter.)

A key stereolithography patent issued to 3D Systems also lapsed at the start of 2014—one that had previously led to a now-dismissed lawsuit between 3D Systems and afore-mentioned Formlabs. Two important laser sintering patents promptly expired in January and June of 2014 as well. What does this mean for 3D printing? Industry expert Terry Wohlers, from independent consulting firm Wohlers Associates, Inc., says we may now see fairly significant progress around SLS in the future, but due to a complicated build process that involves detailed temperature and powder control, we should anticipate a more gradual increase in the technology compared to FDM.

In 2012, former president Barack Obama launched a program to revitalize American manufacturing, anchored by a series of innovation hubs that teams industry leaders, universities and the federal government together in “Manufacturing Innovation Institutes” around the country. The institutes are funded by multi-million dollar government investments that must be matched or exceeded by their corporate and educational partners. The program’s flagship hub—the verbose National Additive Manufacturing Innovation Institute, aka America Makes—is located in Youngstown, Ohio. It’s tasked with “accelerating the adoption of additive manufacturing technologies in the U.S. manufacturing sector and increasing domestic manufacturing competitiveness,” by among other things, “fostering a highly collaborative infrastructure for the open exchange of additive manufacturing information and research.” Since the introduction of the pilot institute, three additional hubs have been launched that focus on energy efficiency, lightweight materials, and digital technology and data management, respectively. The administration’s long-term plan calls for a network of up to 45 nationwide institutes.

There is an ongoing dialog in the 3D printing community surrounding materials, with a fair share of both supporters and detractors. When looking at additive plastics, a few major categories dominate material options: ABS, polycarbonate, polypropylene, nylon and high-temp plastics like PEEK and PEI used in FDM; SL and PolyJet photopolymers that mimic ABS, polypropylene, PMMA and elastic materials; and multiple grades of nylon for SLS. It’s not necessarily an overly extensive selection. With metals materials, however, processes like DMLS have allowed for a fairly impressive list of metals to be built with additive manufacturing. Wohlers even says that development in metals may have made more progress in 10 years than plastics have in 25. At Protolabs, our DMLS materials are a good snapshot of what’s available industry-wide: two grades of stainless steel (17-4 PH and 316L), titanium, cobalt chrome, Inconel and aluminum. Final metal parts are often 97 to 100 percent dense as well.

Using commercial-level industrial printers versus consumer-grade personal printers inherently increases your material options, resolution and quality. And the fact remains that the material selection and mechanical properties of 3D-printed parts still lag behind that of engineering-grade parts that are machined and molded. There’s opportunity to close the gap, though, according to Wohlers, with increases in company-sponsored development that can facilitate the funding needed. Some argue that because 3D printing primarily plays in the prototyping and low-volume realms, the selection and properties are sufficient. Others claim that more development is necessary to advance the technology.

Additive manufacturing works well for designers and engineers who need a concept model of a product, or prototypes for form and fit testing. Some additive processes and materials even build fully functional production parts (ahem, DMLS). Revisiting the maker movement, 3D printing is also used heavily in the consumer market where anyone can customize pretty much anything—art, gadgets, fashion accessories, household goods, etc. It’s a niche that 3D printing has on lock down.

But what these printed applications all have in common is the impracticality of mass production into the thousands. Is a new frontier of additive scalability an area that 3D printing could soon explore? According to Wohlers, medical and aerospace industries (e.g., GE’s laser sintering factory for jet engine fuel nozzles) are beginning to embrace increased printed part production as well as companies in dental and jewelry fields. For a seismic shift to occur, it will likely take more than that. Currently, additive plastic materials are about 50 to 100 times more expensive than traditional manufacturing, according to Wohlers, not 50 to 100 percent more, he emphasizes. So presently, low quantities befit 3D printing. When material cost decreases, the potential for larger production volumes will increase. Until then, processes like injection molding—that involve an initial tooling investment, but lower per-part price as quantities increase—remain a logical next step after prototyping.

3D printing’s manufacturing counterpart is subtractive manufacturing, a machining process that involves the milling of a block of material into a final part. Protolabs uses three- and five-axis CNC machining to mill parts, that like 3D printing, are based on 3D CAD models. Both additive and subtractive processes can rapidly manufacture parts, but differences in capabilities make them conducive for a happy coexistence. Since additive parts are built in layers, the technology almost welcomes complex designs, which don’t necessarily increase a part’s cost. Processes like SL at Protolabs also have the ability to create extremely small objects that can reach a feature sizes as low as 0.0016 in. Conversely, when thermoplastic and metal selection, material properties and surface finishes are more important, quick-turn machining can be used for functional prototyping and market testing. And because machined parts are designed for manufacturability, it’s typically a smoother jump from milling (versus printing) to injection molding if the time comes. Additive manufacturing and machining each play a significant role in prototyping, and if used appropriately, can form a dynamic partnership.

The Future of 3D Printing

The elephant in the room: Is 3D printing a fashionable manufacturing trend that’s destined to fade out or does it have viable consumer and commercial staying power? According to the recently released, 276-page Wohlers Report 2014, which “provides a comprehensive review and analysis of additive manufacturing and 3D printing,” it’s here to stay. The report speculates that the printing industry will hit $12.8 billion over the next four years and surpass $21 billion by 2020. Those are convincing numbers. Wohlers Associates says the continued growth will be led by two important factors—sales of low-cost consumer printers and advancements in additive technology that will allow designers and engineers to use production-quality printed parts in final products. All of this adds up to a promising future, one that Protolabs is glad to invest in.