Ejector pins are the "bouncers" of the injection molding world. They apply a force to eject a part from the mold, and in some cases can leave marks. At Protolabs, our goal is to design and position pins to minimize their effect on your parts, and while Protolabs typically determines pin placement, customers get to sign off on pin locations before an order is finalized.

Pins are located in the B-side mold half, the side in which the part will stay when the mold opens. Once the mold is opened, the pins extend into the mold cavity, push the part out, and then retract, allowing the mold to close and be refilled. 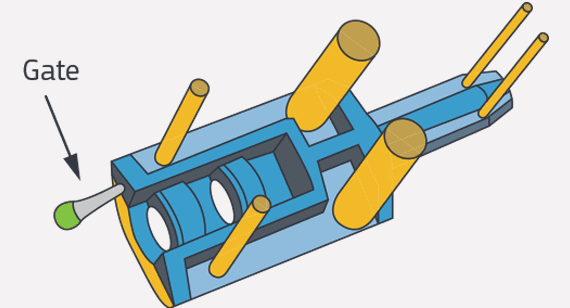 This is an example of the illustration Protolabs provides early in the process of designing the mold so that the location and size of both the gate(s) and ejector pins can be approved.

Protolabs uses round ejector pins, and their placement depends on a number of factors. Obviously the shape of the part is one (see example in illustration). Factors like draft and texture of sidewalls and depth of walls and ribs can increase the likelihood that areas of the part will cling to the mold. Resin choice can also affect pin placement or size. Some resins are "stickier," requiring more force for release from the mold. Softer resins may also require the use of more or wider pins to spread force and prevent puncturing or marring of the cooled plastic.

In a traditional steel production tool it may be possible to machine the end of the pin to match the contour of a part surface that is not perpendicular to the direction in which the pin moves, producing a contoured pin.

Protolabs' process, however, usually does not support the production of contoured pins unless a customer requests it. It is done on a case-by-case basis. A customer can have Protolabs look to see if a contoured pin is a viable option.

The default configuration is a center-cut pin, which on an angled or curved face means the pin hits the tangent of the surface. The pin would hit with half indenting the part and half raised pad on the part. See the illustration that shows center cut and shortest and longest pins on the surface. Protolabs does have two other options besides just center cut: shortest, which leaves standing pad under pin; or longest, which fully indents the pin into the part. Keep in mind, with a shortest pin, you will be making a thicker section of plastic, which, if too thick, could potentially lead to a risk of sink on the back side of the part. Additionally, a longest pin, which is fully indenting, makes the plastic area thin, so make sure it is not too thin so that you do not end up with a hole in the part because of a short shot or the pin punching through the surface entirely. You can work with Protolabs' applications engineers to discuss pin locations and pin type on critical areas to ensure molding and part design concerns are solved. 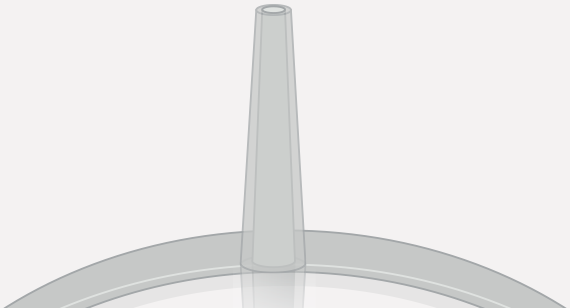 A post gate allows resin to be injected through an ejector-pin hole.

A post gate produces an extreme example of a raised ejector pad (see post gate illustration). In cases in which an edge gate cannot be used, resin is injected through an extension of an ejector pin channel. When the part has cooled, the ejector pin pushes against the resulting post and, in the process, clips off the runner. The post is typically removed from the finished part in a secondary operation.

In most cases, ejector pads (or the vestiges left by their removal) are on the non-cosmetic sides of parts. In some cases, however, this may not be possible. Take for example the case of a clip formed using a pass-through core (see clip hook illustration). In this case, because the clip increases the surface area of that side of the part, the "clip-side" part surface will adhere more strongly to its mold half. This will make that mold half the B-side. The clip would normally be on the cosmetic side of the part, but its presence requires that ejector pads also be on that side of the part.

In addition, ejector pins are also sometimes used to help vent deep features in a mold to prevent gas trap at the end of fill.

All of the examples assume that there are surfaces against which pins can push to eject parts from the mold. There are, however, some designs in which there are no such surfaces. Take, for example, a grate, in which all that faces into the B-side mold half are the tops of ribs. 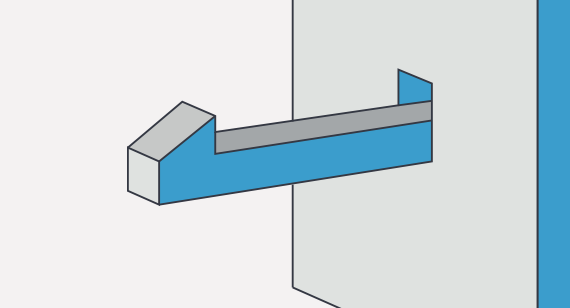 If the rib edges do not provide enough surface area for the pins to push against, the designer would need to add some bosses to act as ejector pads.

Another example would be parts made of liquid silicone rubber (LSR). In those cases, ejector pins are not used. Instead, parts are manually pulled out of the molds.

In most cases, ejector pin placement is a relatively minor concern in the early phases of part design. Protolabs will propose pin placement when an order is placed and present a pin and gate layout for customer approval. At that time, Protolabs will address any questions or concerns and make changes, if necessary, to meet customer requirements.

As always, feel free to contact an applications specialist with any questions, at 877-479-3680 or [email protected].