Imagine the difficulties of being unable to move around on a sandy beach, wander into snow, or to be limited to paved surfaces for a lifetime. For many people in wheelchairs, without assistance from others, that was life. Not anymore. A new style of wheelchair made by Massachusetts-based GRIT—the Freedom Chair—has opened up a world of opportunities to persons with disabilities. Its unique design increases their independence and recreational options and Protolabs is along for the ride. Since 2016, Protolabs has been manufacturing core parts for GRIT’s novel transport.

The lever-propelled, three-wheeled Freedom Chair looks a little like a recumbent bike, but it’s shorter and with a more upright seat. Riders use arm power to push on one or two levers (depending on the model) to propel forward. Intuitively, you pull back to brake. “With lever drive you're able to take advantage of your bench press muscles instead of pushing down on wheels,” said Ben Judge, GRIT chief technical officer. “People can push harder and that force translates to the wheels more efficiently.” All that torque helps riders navigate rough terrain scenarios like sand or mud. And to top it off, on flat surfaces, you can go faster than in a standard wheelchair.

But how do you build a wheelchair that is simultaneously rugged, affordable, and portable?

Back to the Bike

The answer came from a familiar, two-wheeled relative of the wheelchair. “We drew on existing bicycle technology to create an arm-powered device that allows people with limited mobility to push themselves beyond the pavement,” said Judge. A close look at the Freedom Chair reveals several obvious nods to the bike, especially in the tires, tubing, and drivetrain.

With GRIT’s design complete, the next step was to find a company to work with to make quality parts efficiently and affordably. GRIT’s parts had a high degree of complexity, including multiple size requirements, and some needed durable weldments or special finishes. Most important, the parts had to be consistently replicable. That led them to choose Protolabs’ rapid sheet metal team. In the end, Protolabs provided GRIT with three low-volume, end-use parts in three sizes each, ready for GRIT to assemble in their warehouse—and they had to be affordable. “We serve a market with many financial demands. We work very hard to keep costs as low as possible for our riders, because we understand how expensive it can be living with a chronic illness or disability,” said Judge. 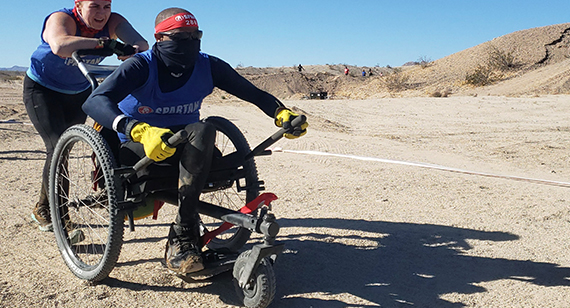 GRIT’s Freedom Chair is an off-road-capable wheelchair that manages a variety of rugged, unpaved terrain, including dry sand. 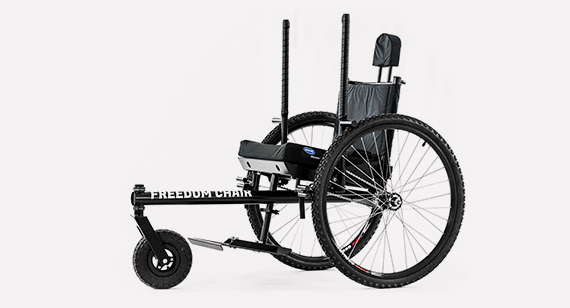 The three parts that Protolabs manufactured are integral to the device that GRIT designers envisioned. Cold-rolled steel (CRS) was used in the seatpan and caster fork due to its strength, cost efficiency, and fatigue resistance.

Both the seatpan and caster fork are zinc-plated and powder coated to avoid environmental damage and corrosion.

All over the world, the GRIT Freedom Chair is making rugged areas accessible to persons with disabilities. Its unique product has been on the market since 2015, expanding what’s possible in a wheelchair. Protolabs makes parts for use in five different models, and each comes in three sizes. GRIT is looking to Protolabs for the future, too. “Protolabs gives us peace of mind with adaptable manufacturing schedules using their lean and just-in-time techniques,” said Judge. “This lets us better manage cash flow and successfully grow our direct-to-customer business.”