Back to the Future: As Automakers Drive Toward an Electric Future, a Glimpse Back Reveals a Surprising Battery-powered Heritage

The first time my friend took me for a ride in her Tesla Model 3, I buckled in and anticipated the incomparable feeling of massive acceleration. It’s true. My Prius wasn’t up to the task. Instead, she treated me to a quiet, seemingly safe ride in a cabin devoid of the usual passel of gauges and knobs. Using autonomous driving on the highway, my friend changed lanes automatically with the touch of the turn-signal, effortlessly dodging cars in the adjacent lane. It was a blast being a passenger, and I quietly dreamed of someday driving my own totally electric autonomous vehicle (AV). Heading back, I thought we were done. As it turned out, the ride wasn’t over…

It may come as a surprise to people that, way back in the mid-19th century, the first powered motor vehicles for personal use ran off batteries, not gas. It wasn’t until close to WW I that the gasoline-powered internal combustion engine (ICE) vehicle drove to a position of dominance among personal vehicles, thanks in part to battery-powered starters (instead of cranks). Rural roadways—many of which were paved before those in the city—beckoned longer-range, gas-powered vehicles. Later, a solid coast-to-coast infrastructure of fueling and service stations emerged, followed in the 1950s by the interstate highway system, which gave birth to American car culture as we know it today and an endless stream of Jan and Dean hits. The quiet, un-smelly electric vehicle (EV) was left behind.

But history is reversing itself and the ICE is gradually ceding dominance to 100% EVs and to hybrids, the latter of which combine instant battery power with gasoline engines. Modern, efficient hybrids, which have been around since the 1990s, offer the best of both worlds, fusing positive environmental attributes and the instant power of batteries with long-range, quickly fueled gas engines. It doesn’t hurt that they have come down to price points closer to their ICE brethren.

The same cannot be said yet for 100% EVs. They still command a significant premium, partly due to the cost of parts to make them. Because demand is comparatively low, parts orders are lower, and thus more expensive. Manufacturers are struggling to find parts suppliers willing to work at those sweet spot kinds of quantities. Digital manufacturers are poised to provide that link to the EV/AV future with speed, flexible quantities, and reliability. They are the missing link that can make an electric future happen. 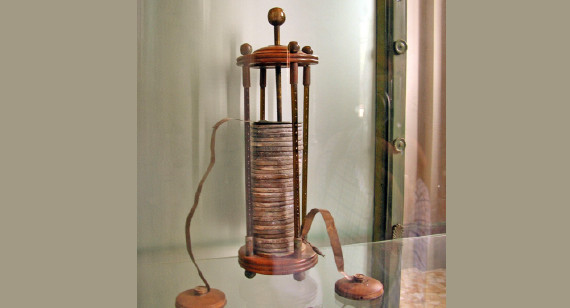 Charging Forward: The History of the Battery

To understand how we got to this point, and because it’s fun to geek out, we need to delve into the history of the battery a bit then exit onto the EV highway. An easy starting point is the Leyden jar, which is no more than a glass vessel filled with water and coated with foil, both inside and out, and a metal rod poking out the top. Come close to the rod and—ZAP. Benjamin Franklin—as part of his kite-flying-in-lightning experiment almost 300 years ago—called his version a battery, though we think of it today as a capacitor, and the modern version is ubiquitous in electronic devices.

In 1800, Alessandro Volta invented the voltaic pile. This was the first true battery because the combination of zinc and silver could hold a charge even when not in use. Gaston Plante developed the first lead-acid rechargeable battery in 1859, and in 1880, Camille Alphonse Faure improved upon Plante’s work, using lead sulfates to expand electrical storage capacity.

Two more important battery technologies followed. First, was the nickel-cadmium battery in 1899. The NiCad, as we call it today, was the first truly functional rechargeable battery. It was also the first alkaline battery, swapping out lead acids for an alkaline (basic, or high pH) electrolyte. Today’s modern lithium-ion batteries first arrived in 1912. Li-ion has the advantage of holding more electricity while having low weight, compared to other battery products. In 1991, SONY released the first rechargeable Li-ion battery. More advanced versions of Li-ion batteries are the current international standard for EV and AV vehicles as they better tolerate discharge-charge cycles.

The History of Electric Vehicles and Hybrids: Sparking the Future

Tech history dictates that you have to do something with your new device, so you know someone was going to plunk a battery (or a whole bunch of them) into a carriage. Scottish inventor Robert Anderson was that guy. In the 1830s, he developed the first electric vehicle. Batteries were obviously unsophisticated back then, severely limiting range. In the end, this was more of a proof-of-concept than a functional mode of transportation. But at this point, we’re in first gear.

In 1887, William Morrison prototyped his first “electric carriage.” A later version attached 24 heavy battery cells to the rear axle of a reconfigured horse-drawn carriage, probably leaving horses to snicker at its lack of speed and stamina. 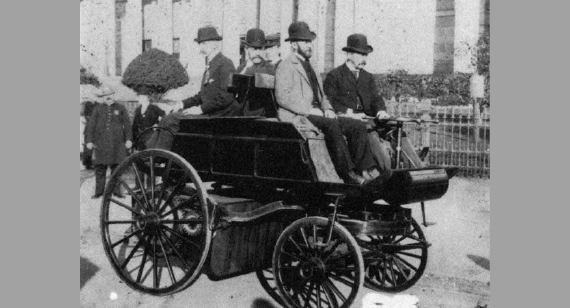 It wasn’t until 1894 that the first commercially viable EV—the Electrobat—was released. Sadly, for having such a great name, it was overly weighted-down by its batteries and rough-riding steel tires. After several iterations, it’s now relegated to history, and might even be an answer on Jeopardy!

The first hybrid vehicle—made by Lohner-Porsche and called the Semper Vivus (“always alive”)—came out at the turn of the 20th century. It followed in the steps of its older sibling the all-electric Egger-Lohner C.2 Phaeton. That’s right! The first car with the Porsche name affixed to it was part electric!

You probably knew that somewhere along the way, the founder of General Electric, Thomas Edison, would drop into the history of electric cars. In the mid 1910s, the powerhouse duo of Henry Ford and Thomas Edison worked together to develop an affordable EV for the masses. The project never came to fruition, though, as the Edison batteries weighed far too much and couldn’t properly power the car in many driving environments. That was the end of Ford’s consideration of EVs as Ford moved exclusively to gasoline-powered autos, such as their already popular Model T. Other automakers followed suit. About a century later, Ford (the company) would revisit this decision.

Mid-century EVs like the Henney Kilowatt and GM’s Electrovair II never caught on with the public or stayed as concept cars. In 1969, GM decided to try something new with the experimental XP-883 plug-in hybrid. While plug-ins are on an ascension now, that one stayed on the drawing board, too. The next big news in EV was in 1971 when Boeing built the Lunar Roving Vehicle (LRV), essentially a golf cart that astronauts could use to take a drive in the country—on the moon. Apollo 15 astronauts were first, but Apollo 17’s crew drove their LRV about five miles. To our knowledge, no one said “Are we there yet?” while riding in the LRV.

This discussion of EV and hybrid vehicles would be remiss if we didn’t mention GM’s EV1. Available primarily as a lease-only electric vehicle, it had lots of cool tech in the drivetrain. It never went beyond leasing. In 1997, Toyota released the all-electric RAV4 EV, which after 17 model years never sold well. But it’s notable, in part, because Toyota worked on it with a little-known startup company called Tesla. While the original hybrid vehicle concept parties like it’s 1899, the Honda Insight went on sale in 1999. It was the first modern hybrid and is still available today. 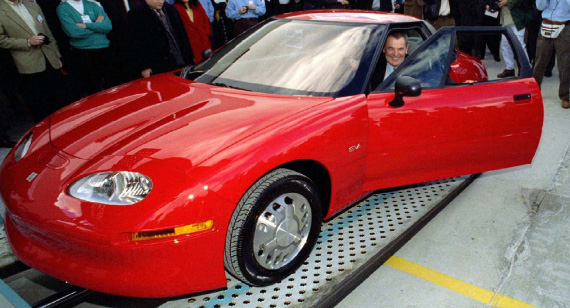 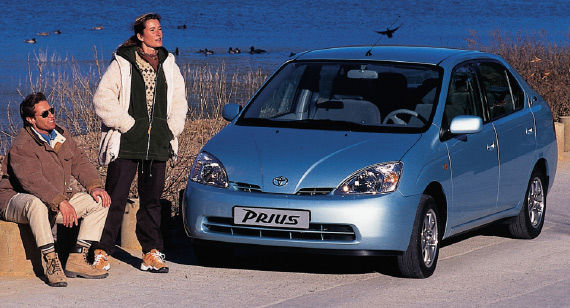 It was followed one year later by the car most people associate with hybrid technology, the Toyota Prius. The Prius lives on today with both hybrid and plug-in hybrid versions.

The luxury EV boom started in 2012 with the release of the Tesla Model S. Focusing on performance and range, though not on affordability, it quickly foiund an audience of enthusiasts and opened the door that other startup EV/AV manufacturers walked through, with traditional brands like GM, Volkswagen, Ford, Toyota, and others, following behind.

EV and AV vehicles are often spoken about in the same breath, as if they exist in the same ecosystem. AV really refers to automated safety and driving features that use sensors to interact with the environment. To that extent, basic AV has been around a long time: in traction control, cruise control, and the like. But modern AV technology employs even more specialized sensors, including laser-based LIDAR. Sensors explore the environment and react to stimuli, such as adjusting your car to the speed of surrounding traffic (adaptive cruise control), pedestrian detection, blind spot monitoring, and collision avoidance. These features involve high-requirement parts and assemblies to ensure that the sensors provide accurate data to the central computer system. Ah, but the Holy Grail is hands-free driving.

An illustration of Tesla Autopilot sensors and cameras. Courtesy of Tesla.

What makes AVs so special is the promise that they will bring of 100% safe driving and effortless travel across long distances. Certainly, that was the dream presented in GM’s 1939 World’s Fair exhibition, Futurama. Admittedly, some of an AV’s best features are not 100% ready for prime time (BZZZZ: Put your hands back on the steering wheel!), but as with all technology these days, software updates are bringing us closer to a safer driving world requiring less input from the driver. Time will tell if drivers—many of whom love the feeling of driving their cars—will be willing to cede control of their cars to an onboard computer.

As well-known OEMs and tech-forward startups move aggressively to the game-changing future of EVs and AVs, digital manufacturing is there, supporting this shift. In many ways, it’s a match made in heaven. Automakers are testing and experimenting with EV, AV, and related battery technology as they go, requiring multiple—and rapid—iterations. This type of R&D activity is well-suited for agile digital manufacturers that can provide multiple iterations, low-volume production, quality assurance systems, single sourcing, and more. Oh, and provide all of it fast, accelerating R&D and enabling companies to get to market faster with whatever products they are creating—EVs, AVs, batteries, charging stations, or  the next breakthrough transportation technology.

As for that first Tesla ride, 15 minutes after I got into the car, and figuring my friend was done with showing off her cool ride, she drove us to a quiet, uninhabited side road and slammed her foot on the accelerator. I flew back into my seat while she laughed maniacally. The power from the dual electric motors blew me away. I screamed like a little kid at a theme park. Unfortunately, like all of the best rides, it was over too soon. I spent the next two hours overusing the word “cool” and the next two weeks researching EV and AV cars. If only they can get the price down.