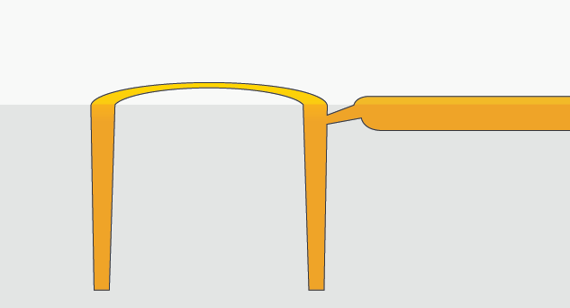 Tunnel gates, also known as pin or post gates, deliver resin to the mold cavity. They are machined at an angle and below the parting line.

When designing parts for injection molding, key elements of the mold that you will need to work out are the gates, which control the flow of the melted resin (plastic) into the mold cavity. Gates are the connections where the runners—the system that delivers the resin to the mold—meet the mold cavity.

Gates come in a variety of shapes and sizes and can maneuver the plastic into the cavity in various ways. Gating options include, among others, tab gates, which are most common, hot tip gates, and tunnel gates (also called pin or post gates), which this blog post focuses on.

At Protolabs, we offer the capability of designing and machining tunnel gates into customer molds. The end result is often a more cosmetically pleasing, and consistent, gate vestige on finished parts. This result is in comparison to other traditional gating options mentioned, which require manual trimming of the part by an operator. These other methodologies have variability because of the manual trimming process and are also typically larger and more cosmetically noticeable.

So, what actually is a tunnel gate? It is a type of molding gate that is machined at an angle and below the parting line of the mold, such that the part is automatically sheared from the runner (which, as mentioned, delivers resin to the mold cavity) at the time of part ejection. Accordingly, because the runner is cut from the part as part of the ejection process, there is no need to manually trim the gating system from the part itself. 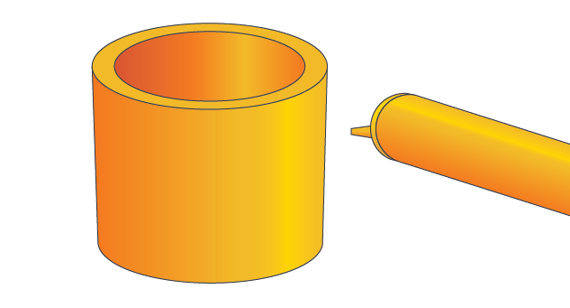 Compared to other gating methods, tunnel gates result in a more cosmetic and consistent gate vestige.

Tunnel gates can’t be used with every material available for injection molding. That’s because a tunnel gate relies on the ability of the material to shear on the tunnel gate edge as the part is ejected. If a material is too flexible, a proper shearing action isn’t achievable. Additionally, if a material is too brittle, the tunnel and runner may not be flexible enough to be ejected, causing processing issues. Also, materials that are highly abrasive can quickly wear down the shearing edge, which requires sharpness, resulting in a drastic reduction of gate longevity.

Materials that are compatible for tunnel gates are:

Our Materials Comparison Guide offers more detail on each specific plastic. In addition, our pocket-sized material selector is a quick reference guide to help you identify the right material for your molding project.

Getting Your Part Quoted with a Tunnel Gate

Ultimately, many variables can affect how an injection-molded part is crafted: part geometry, material selection, and the mold design, among other factors. With this in mind, beyond this post, you can read about contending with parting lines in injection molding, and enhancing cosmetic appearance of your molded parts. Still more design tips can be found here. You can also order our second edition of Injection Molding Design for Dummies.